3-D printing gets a turbo boost from U-M technology 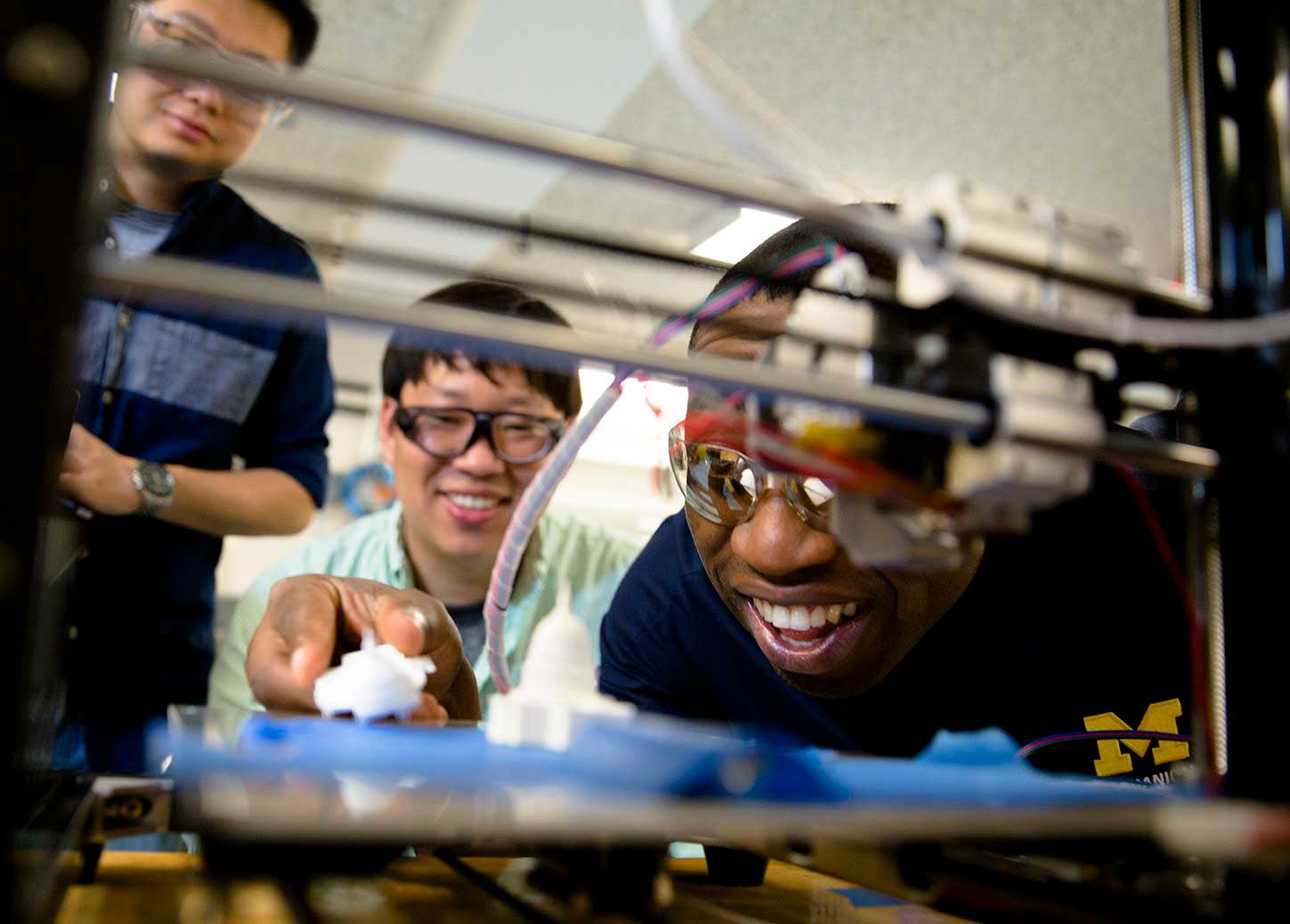 ANN ARBOR—A major drawback to 3-D printing—the slow pace of the work—could be alleviated through a software algorithm developed at the University of Michigan.

The algorithm allows printers to deliver high-quality results at speeds up to two times faster than those in common use, with no added hardware costs.

One of the challenges for today’s 3-D printers lies in vibrations caused as they work. A printer’s movable parts, particularly in lightweight desktop models, cause vibrations that reduce the quality of the item being produced. And the faster the machine moves, the more vibrations are created. 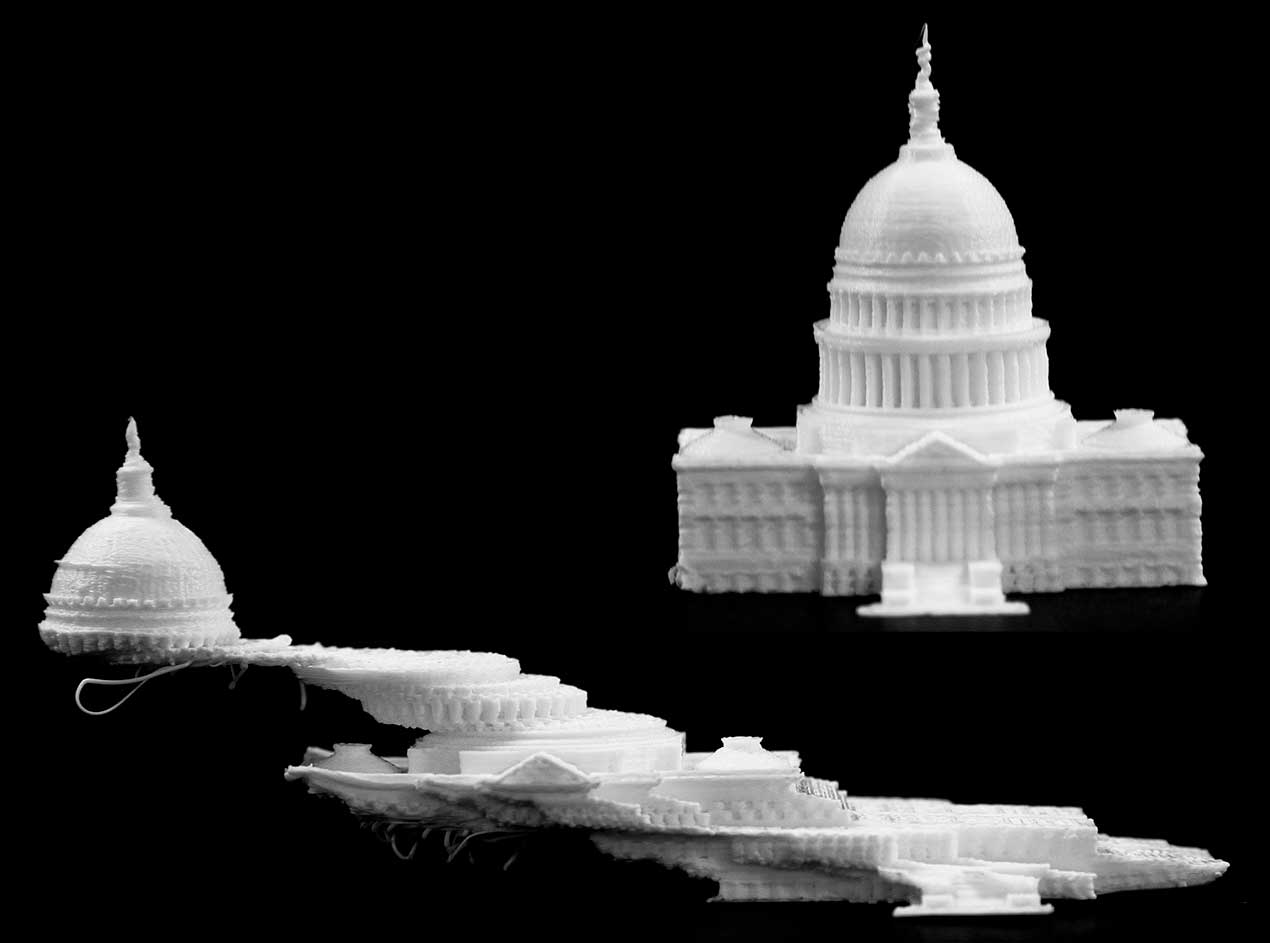 On the bottom, excess vibrations from the 3-D printer caused the printhead to offset multiple times. On the top, the new U-M algorithm was applied to the printer, enabling a successful, fast print. Both U.S. Capitol replicas were printed on a HICTOP Prusa i3 3-D printer at ~2X speed. Image credit: Evan Dougherty, Michigan Engineering

“Armed with knowledge of the printer’s dynamic behavior, the program anticipates when the printer may vibrate excessively and adjusts its motions accordingly,” said Chinedum Okwudire, associate professor of mechanical engineering who directs U-M’s Smart and Sustainable Automation Research Lab.

To ensure details are reproduced accurately, the machines are operated slowly. And the pace of 3-D printing is one of the factors that has prevented the technology finding a broader audience.

Okwudire cited statements made last year by one 3-D printing company executive about the issues holding the industry back.

“We’re just waiting for the next evolution of the technology,” Simon Shen, CEO of XYZPrinting, told TechCrunch last year. “If they can do it much faster, more precise and easier, that will bring more people to 3-D printers. Not waiting for four to six hours for a print, but 40 to 60 minutes.”

In explaining how his algorithm works, he uses the example of someone trying to deliver a speech in a large hall. To reach ears in the farthest rows, that speaker will have to shout.

Should someone produce a megaphone, and the speaker still continues to shout, their voice will be overly amplified and cause the audience to squirm. Using the megaphone in a normal voice, however, produces the right clarity and volume.

“Our software is like that person who realizes their voice is going to be overly amplified,” Okwudire said. “It acts preemptively because it knows that the behavior of the printer is going to be ahead of time.

“Eventually, one of the places we would want to see the algorithm applied is in the firmware—the software that runs on the printer itself. That way, it will be integrated with the printers, regardless of the size.”

Okwudire said his software can also be used on a variety of industrial-grade machines that suffer from similar limitations due to vibrations.

The journal Mechatronics recently published the lab’s findings in a study titled: “A limited-preview filtered B-spline approach to tracking control—With application to vibration-induced error compensation of a 3-D printer.”