A bridge to the quantum world: Dirac electrons found in unique material 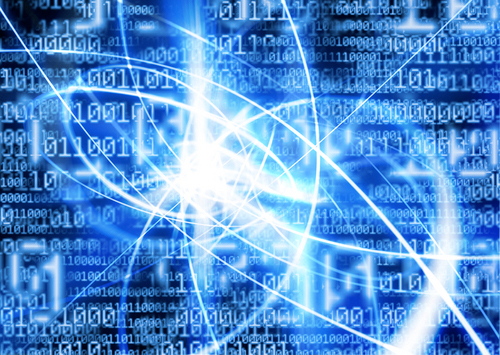 ANN ARBOR—In a discovery that helps clear a new path toward quantum computers, University of Michigan physicists have found elusive Dirac electrons in a superconducting material.

Quantum computers use atoms themselves to perform processing and memory tasks. They promise dramatic increases in computing power because of their ability to carry out scores of calculations at once. They could factor numbers dramatically faster than conventional computers, and would be game-changers for computer security.

Superconductors can—at cold enough temperatures—conduct electricity indefinitely from one kickstart of energy. They have no electrical resistance. Dirac electrons, named after the English physicist whose equation describes their behavior, are particles with such high energy that they straddle the realms of classical and quantum physics.

“They’re a bridge between the worlds,” said Lu Li, assistant professor of physics in the College of Literature, Science, and the Arts and leader of a study published in the current edition of Physical Review Letters.

Other research teams had theorized that copper-doped bismuth selenide contained Dirac electrons, but no one had ever detected them. Li and his colleagues were able to observe the electrons’ tell-tale quantum oscillations in the material by cooling it to cryogenic temperatures and exposing it to a strong magnetic field. Materials rotate under intense magnetic fields, and the researchers could detect the quantum oscillations by varying the strength of the magnetic field and the temperature.

In quantum computers, “qubits” stand in for the 0s and 1s of conventional computers’ binary code. A conventional bit can be either a 0 or a 1. A qubit can be both at the same time—until you measure it. Measuring a quantum system perturbs it into picking just one phase, which eliminates its most enticing attribute.

As one of the major hurdles to developing practical quantum computers, research groups are exploring ways to get around this so-called “local noise” problem. The new class of materials that copper-doped bismuth selenide belongs to—topological superconductors—present a new possibility. The Dirac electrons within them have the ability to clump together into a new kind of qubit that changes the properties of the material in a way that’s detectable to an observer, but not to the qubits. So the qubits can carry on calculating without knowing they’re being measured.

“Schrödinger’s cat can stay alive and dead at the same time,” said Li, referring to Austrian physicist Erwin Schrödinger’s famous thought experiment about quantum mechanics. “The so-called qubit is no longer the object we’re looking at. This material could be a promising way to make quantum computers.”

In addition to Li, the research team includes Benjamin Lawson, U-M doctoral student in physics and Yew San Hor, assistant professor of physics at Missouri University of Science and Technology. The research was funded by U-M and Missouri S&T. A portion of the work was performed at the National High Magnetic Field Laboratory in Florida.