A simulated city for automated cars to open at U-Michigan 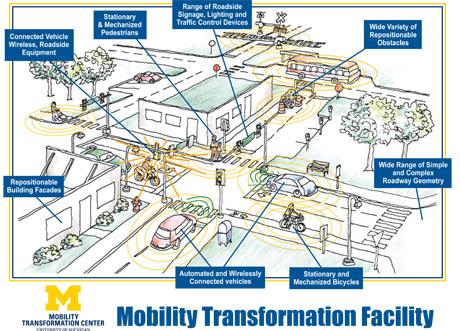 ANN ARBOR—No university in the world has an automated vehicle test facility like the one that will open this fall on North Campus, University of Michigan officials say.

Under construction this summer, the patent-pending Mobility Transformation Facility will be 32 acres of simulated city center and four-lane highway. It’s designed to let researchers test how automated and networked vehicles respond to rare but dangerous traffic events and road conditions. Such testing is a vital step in making sure these advanced vehicles can operate safely in the real world, researchers say.

The facility will be operated by U-M’s Mobility Transformation Center, a public/private partnership that aims to change how people and goods move around – and starting in Southeast Michigan near the heart of the nation’s auto industry. The College of Engineering is one of several university members of the center, and it contributed funding for the facility. Two Michigan Engineering robotics researchers will be among its first users.

“We’re very proud of the design because it’s a unique facility,” said Peter Sweatman, director of both the Mobility Transformation Center and the U-M Transportation Research Institute (UMTRI), another leading member of the center. ‘We had folks at UMTRI working on how humans interact with technology and the College of Engineering brought expertise in robotics and how to test sophisticated machines. It all came together.”

The test environment will have merge lanes, stoplights, intersections, roundabouts, road signs, a railroad crossing, building facades, construction barrels and eventually a mechanical pedestrian. It will model the kind of connected and automated mobility system that the center aims to enable in Ann Arbor by 2021.

Such a system could dramatically reduce crashes, ease traffic and reduce pollution and energy use. It would involve vehicles that communicate with each other and the world around them, rather than operating as autonomous “islands unto themselves,” Sweatman said.

Michigan Engineering researchers will initially use the facility to run tests on an automated Ford Fusion hybrid. They’re working with the company to develop sensors and mapping technology for the vehicle.

“We will actually be writing code for the test facility,” said Edwin Olson, an assistant professor of computer science and engineering. “We’ll be able to trigger tricky traffic signal timings, or a pedestrian stepping into the intersection at just the wrong time, for example.”

Ford officials envision a future in which humans stay behind the wheel and automated technologies enhance their abilities. Others are aiming to take the person out of the driver’s seat entirely. In both cases, vehicles need practice, in a sense, handling tough situations.

“The type of testing we’re talking about doing – it’s not possible to do today in the university infrastructure,” said Ryan Eustice, an associate professor of naval architecture and marine engineering. “Every time a vehicle comes around the loop, it can hit something unusual. That will give us a leg up on getting these vehicles mature and robust and safe.” Facilities like this are also very rare in the auto industry, the researchers said.

Representatives from U-M and industry members of the Mobility Transformation Center held a ceremonial groundbreaking for the facility in May.

“Today reminds me of when I was a young boy and used to watch The Jetsons,” said David Munson, the Robert. J. Vlasic Dean of Engineering. “We’re not doing flying cars here, but I think we’re doing something more important … and almost as impressive.”

Key industry leaders from a variety of sectors have joined the Mobility Transformation Center as its initial partners. They include Bosch, Econolite, Ford, General Motors, Toyota and Xerox.