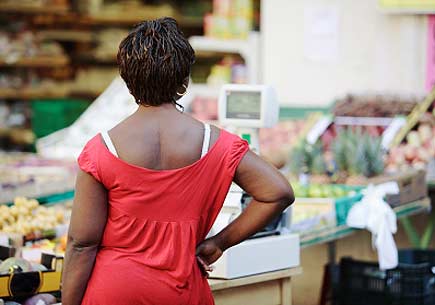 ANN ARBOR—Trying to find a produce store or a large grocer in an economically depressed neighborhood is about as easy as finding an apple in a candy store.

Lack of access to good nutrition impacts racial and ethnic minorities and recent immigrants disproportionately. Poor nutrition combined with higher stress can contribute to other health problems, including type 2 diabetes.

But a new University of Michigan study may help explain how to cope with this stress and perhaps curb some of these health problems.

Rebecca Hasson, assistant professor at the U-M schools of Kinesiology and Public Health, found that overweight and obese African-American children and teens who successfully adapt to mainstream American culture—while maintaining strong ties with their own—could reduce stress and stress eating. In turn, this could reduce the risk for type 2 diabetes.

The study also found that Latino adolescents of higher socioeconomic status showed increased diabetes risk, which means they didn’t appear to benefit from the protection against diabetes that higher social and economic status affords.

Researchers cannot fully explain this finding, but again, it may be stress-related. Hasson said Latinos could suffer increased psychological stress associated with racial discrimination and social isolation if they live in predominantly white areas. Another possibility is that longer time in the U.S. is associated with poorer health outcomes for recent immigrants.

Pediatric obesity in the U.S. has more than tripled in the last 30 years, particularly among Latinos and African-Americans, said Hasson, who also heads U-M’s Childhood Disparities Research Laboratory. This disparity is partially due to greater exposure to psychological stress, which leads to cortisol production and potential stress eating.

The study, “Sociocultural and socioeconomic influences on type 2 diabetes risk in overweight/obese African-American and Latino-American children and adolescents,” appears in the Journal of Obesity.