ANN ARBOR—Skewed skulls may have helped early whales discriminate the direction of sounds in water and are not solely, as previously thought, a later adaptation related to echolocation. University of Michigan researchers report the finding in a paper to be published online in the Proceedings of the National Academy of Sciences during the week of Aug. 22.

Asymmetric skulls are a well-known characteristic of the modern whale group known as odontocetes (toothed whales). These whales also have highly modified nasal structures with which they produce high-frequency sounds for echolocation?a sort of biological sonar used to navigate and find food. The other modern whale group, mysticetes (baleen whales), has symmetrical skulls and does not echolocate. 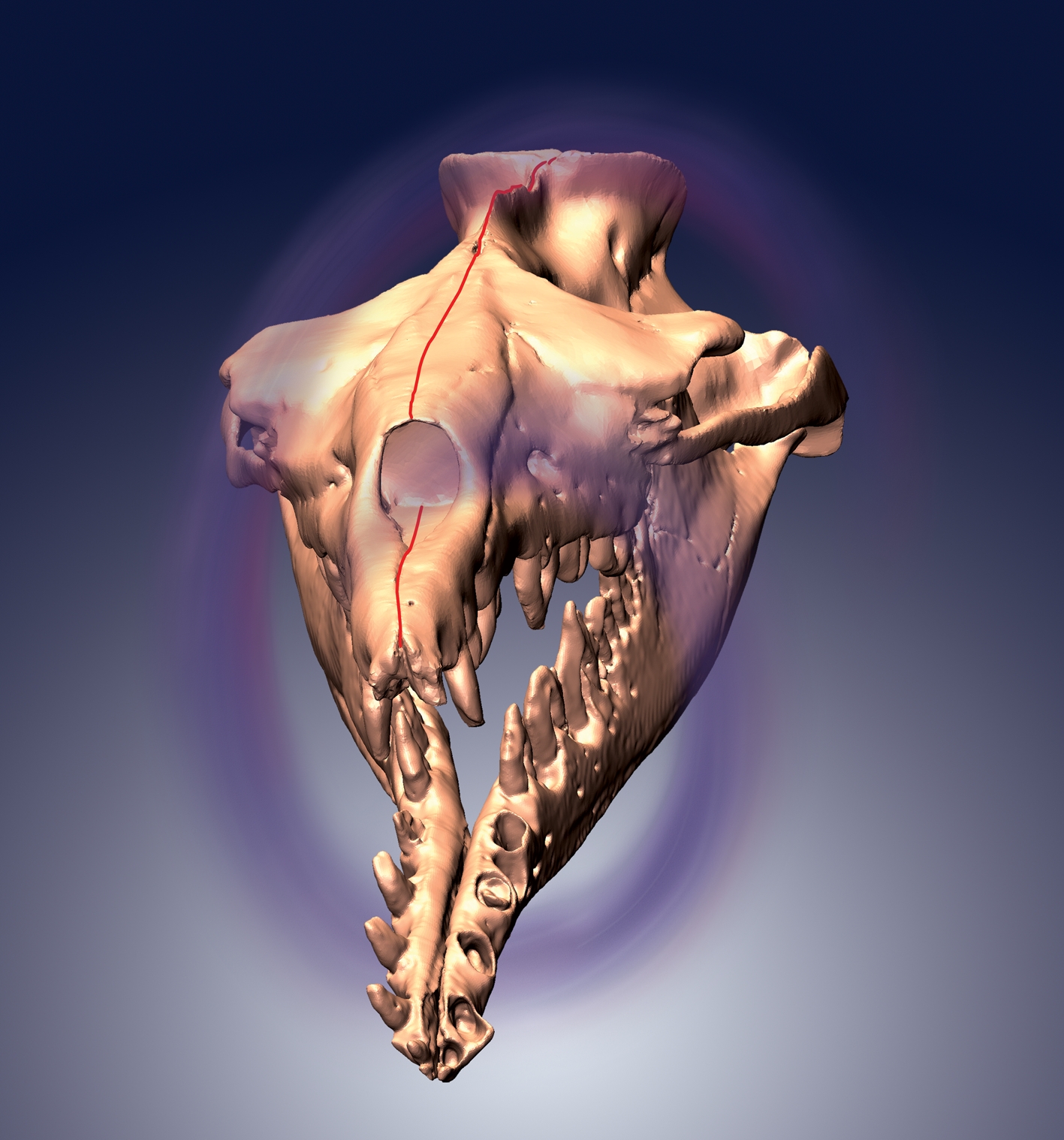 3D model of the asymmetrical skull of the archaeocete whale Basilosaurus isis, computed from CT scans. Note the leftward curvature of the midline suture of the skull (red line). The whole skull is affected by a torsion that is clockwise when viewed from the head forward (symbolized by the swirl). Asymmetry is a newly identified archaeocete characteristic and evolved in relation to directional hearing in water. Credit: Julia M. Fahlke These observations led scientists to believe that archaeocetes?the extinct, ancient whales that gave rise to all modern whales?had symmetrical skulls, and that asymmetry later developed in toothed whales in concert with echolocation. But a new analysis of archaeocete skulls by U-M postdoctoral fellow Julia Fahlke and coauthors shows that asymmetry evolved much earlier, as part of a suite of traits linked to directional hearing in water.

“This means that the initial asymmetry in whales is not related to echolocation,” said Fahlke, who is working with Philip Gingerich, an internationally recognized authority on whale evolution, at the U-M Museum of Paleontology.

When Fahlke first began working with Gingerich, who is the Ermine Cowles Case Collegiate Professor of Paleontology and professor of geological sciences, ecology and evolutionary biology and anthropology, she intended to study a completely different aspect of whale evolution: tooth form and function.

“Modern whales don’t chew their food,” Fahlke said. “Toothed whales just bite it and swallow it, and baleen whales filter feed. But archaeocetes have characteristic wear patterns on their teeth that show that they’ve been chewing their food.” By studying those wear patterns, she hoped to piece together how and what early whales ate and how their eating habits changed over time. She started by studying the skull of Basilosaurus, a serpent-like, predatory whale that lived 37 million years ago, using a three-dimensional digital model generated from CT scans of the fossil that were acquired at the U-M Medical School Department of Radiology. 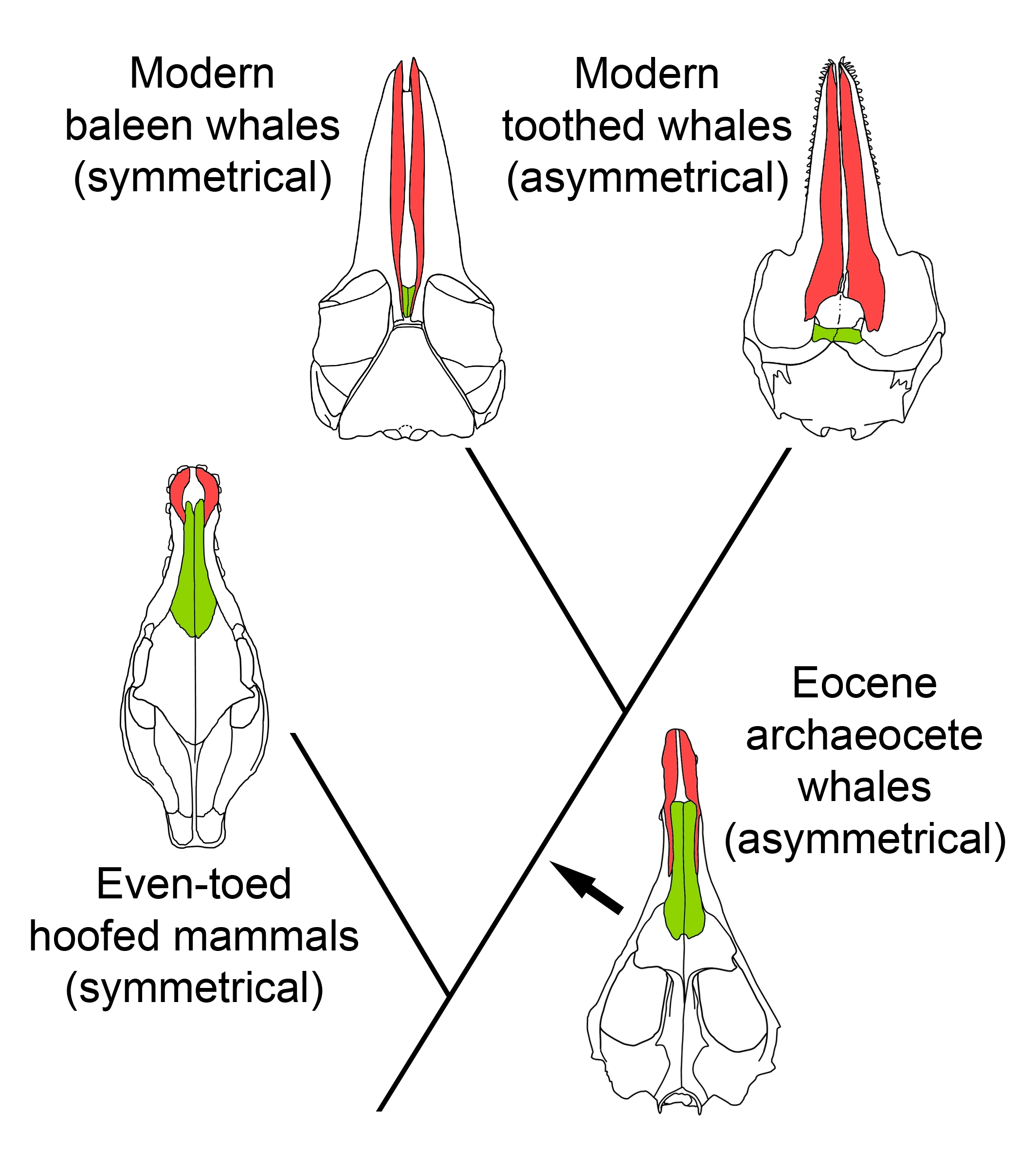 Evolutionary relationships between terrestrial even-toed hoofed mammals (artiodactyls), Eocene archaeocete whales, and modern toothed and baleen whales. The skulls of archaeocetes and toothed whales are asymmetrical, but the skulls of artiodactyls and baleen whales are symmetrical. Asymmetry evolved in archaeocetes and was later exaggerated in toothed whales. Asymmetry was reduced in baleen whales. Credit: Julia M. Fahlke The actual skull on which the model was based was noticeably asymmetrical, but Fahlke and colleagues at first dismissed the irregularity.

“We thought, like everybody else before us, that this might have happened during burial and fossilization,” Fahlke said. “Under pressure from sediments, fossils oftentimes deform.” To correct for the deformation, coauthor Aaron Wood, a former U-M postdoctoral researcher who is now at the University of Florida, straightened out the skull in the digital model. But when Fahlke began working with the “corrected” model, the jaws just didn’t fit together right. Frustrated, she stared at a cast of the actual skull, puzzling over the problem.

“Finally it dawned on me: Maybe archaeocete skulls really were asymmetrical,” Fahlke said. She didn’t have to go far to explore that idea; the U-M Museum of Paleontology houses one of the world’s largest and most complete archaeocete fossil collections. Fahlke began examining archaeocete skulls, and to her astonishment, “they all showed the same kind of asymmetry?a leftward bend when you look at them from the top down,” she said.

To study the asymmetry in a more rigorous way, Fahlke and colleagues selected six well-preserved skulls that showed no signs of artificial deformation and measured those skulls’ deviation from a straight line drawn from snout to back of skull. For comparison, they made similar measurements of the decidedly symmetrical skulls of artiodactyls, the group of terrestrial mammals from which whales evolved. 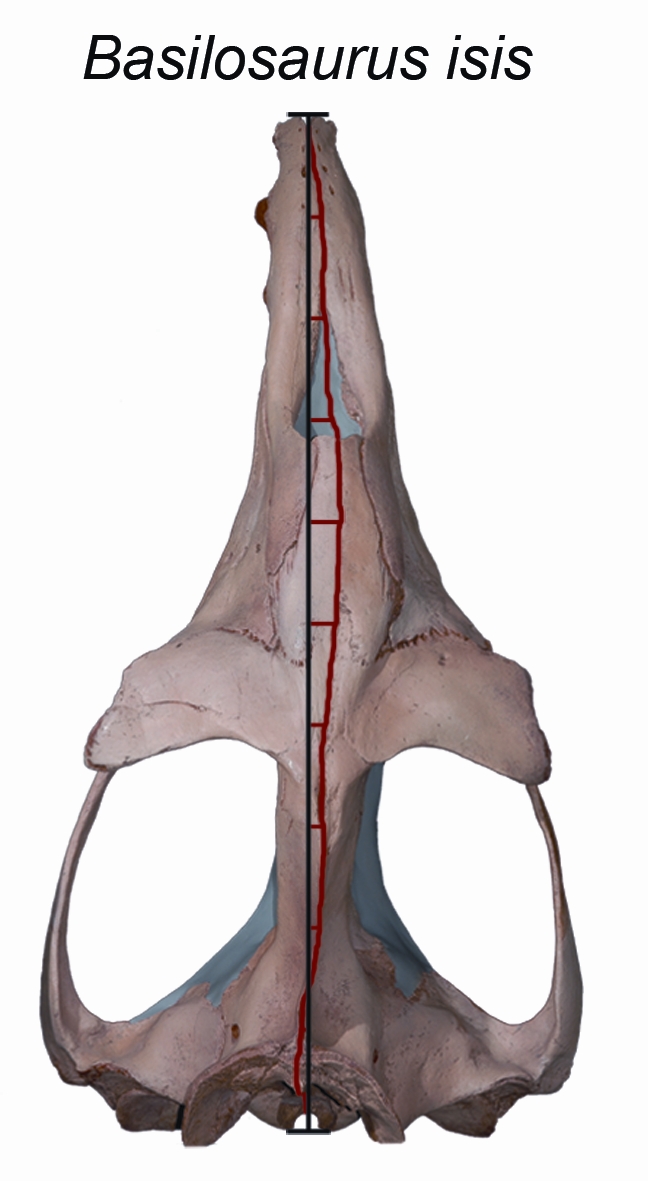 Cast of the skull of Basilosaurus isis, seen from the top, showing the deviation of the midline of the skull (red) from a straight line (black) connecting the tip of the snout with the back of the skull. Note that most of the midline lies to the right of the straight line, meaning that the skull is bent to the left. Credit: Julia M. Fahlke “Taken together, the six skulls deviate significantly from symmetry,” Fahlke said. “Taken individually, four of them deviate significantly.” The other two appear asymmetrical, but their measurements fall within the range of the symmetrical comparative sample.

“This shows that asymmetry existed much earlier than previously thought?before the baleen whales and toothed whales split,” Fahlke said. “This means that the earliest baleen whales must have had asymmetrical skulls, which later became symmetrical.”

The authors also show in their paper that archaeocete asymmetry is a three-dimensional torsion, or twist that affects the whole skull, rather than only a two-dimensional bend. Interestingly, archaeocetes have structures similar to those that are known in toothed whales to function in directional hearing in water: fat bodies in their lower jaws that guide sound waves to the ears, and an area of bone on the outside of each lower jaw thin enough to vibrate and transmit sound waves into the fat body. This adaptation, along with the acoustic isolation of the ear region from the rest of the skull, appears to have evolved in concert with asymmetry.

The link between asymmetry and directional hearing is not unique to whales, Fahlke said.

“Owls have asymmetrical ear openings, which help them decompose complex sounds and interpret differences and space and time, so that they can discriminate the rustling of leaves around them from the rustling of a mouse on the ground,” Fahlke said. “Such ability would also be helpful when you’re trying to detect prey in the water, so we interpret that the same kind of mechanism was operating for archaeocetes.”

In addition to Fahlke, Gingerich and Wood, the paper’s authors include Robert C. Welsh a research assistant professor of radiology and of psychiatry at the U-M Medical School.