ANN ARBOR—Clinically depressed people have a hard time telling the difference between negative emotions such as anger and guilt, a new University of Michigan study found.

“It is difficult to improve your life without knowing whether you are sad or angry about some aspect of it.”

The ability to distinguish between various emotional experiences affects how individuals deal with life stressors, said Emre Demiralp, a researcher in the U-M Department of Psychology and the lead author of the study recently published in Psychological Science.

Being unable to differentiate certain emotions from each other might lead to a person choosing an action that is not appropriate, thus exacerbating the problem, she said.

“It is difficult to improve your life without knowing whether you are sad or angry about some aspect of it,” Demiralp said. “For example, imagine not having a gauge independently indicating the gasoline level of your car. It would be challenging to know when to stop for gas.

“We wanted to investigate whether people with clinical depression had emotional gauges that were informative and whether they experienced emotions with the same level of specificity and differentiation as healthy people.” 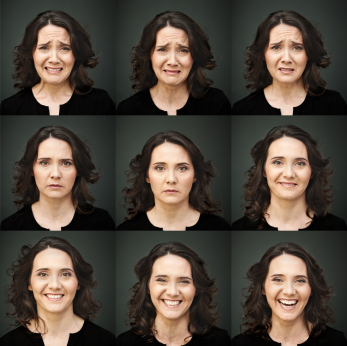 The study involved 106 people ages 18-40, half of whom were diagnosed with clinical depression. Participants carried a Palm Pilot for seven to eight days and recorded their emotions at random times each day.

They indicated how they felt based on seven negative emotions (sad, anxious, angry, frustrated, ashamed, disgusted, guilty) and four positive emotions (happy, excited, alert, active) on a scale from one (not at all) to four (a great deal).

When participants experienced two emotions at the same time, they often found it challenging to distinguish between negative emotions than positive emotions, the study found.

Demiralp said that positive emotions serve as a buffer in coping with negative emotions for depressed people.