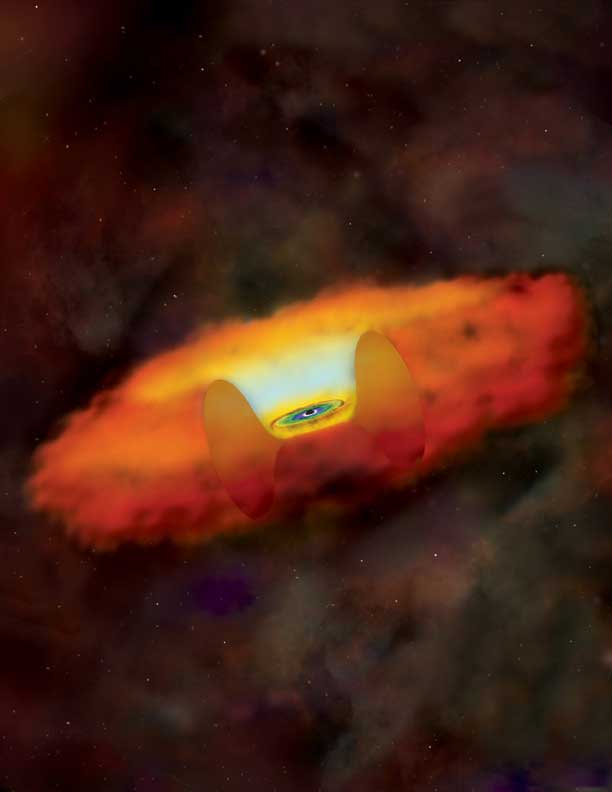 An artist’s illustration of the black hole at the center of dwarf galaxy RGG 118. Credit: Chandra X-ray ObservatoryANN ARBOR—In a dwarf, disc galaxy 340 million light years away, University of Michigan astronomers have found the smallest black hole ever observed in the center of a galaxy.

At just 50,000 times the mass of the sun, it’s more than two times smaller than any other known object of its kind. It’s a full 100,000 times less massive than the largest black holes at the heart of other galaxies.

“In a sense, it’s a teeny supermassive black hole,” said Elena Gallo, assistant professor of astronomy in the U-M College of Literature, Science, and the Arts.

Black holes come in two types. The “stellar mass” variety have the mass of several suns. They form when the largest stars die and collapse. The other “supermassive” kind is typically at least 100,000 times the mass of the sun (the newly found one is half that). These are thought to form and evolve with the host galaxies whose centers they inhabit.

Every large galaxy, including our own Milky Way, is believed to have a supermassive black hole at its core. The recently discovered object is one of the first to be identified in a dwarf galaxy.

The findings illuminate for astronomers important similarities between galaxies of vastly different scales. And because the dwarf galaxy, called RGG 118, is so small, it’s unlikely that it has ever merged with other galaxies, so it gives researchers a window to a younger universe. Larger galaxies are thought to have grown through mergers.

“These little galaxies can serve as analogs to galaxies in the earlier universe,” said Vivienne Baldassare, a U-M doctoral student and first author of a paper on the results published today in the Astrophysical Journal Letters. “For galaxies like our Milky Way, we don’t know what it was like in its youth.

“By studying how galaxies like this one are growing and feeding their black holes and how the two are influencing each other, we could gain a better understanding of how galaxies were forming in the early universe.”

As is the case in most present-day galaxies, the Milky Way’s black hole is dormant. Young or small galaxies like RGG 118 have active nuclei that are still in the process of swallowing stars, dust and gas. During this tumultuous time in galaxies’ history, the central black hole helps to shape its host’s evolution. It acts as a thermostat, Gallo described, regulating both the temperature of the galaxy and the movement of the dust and gases that form stars. 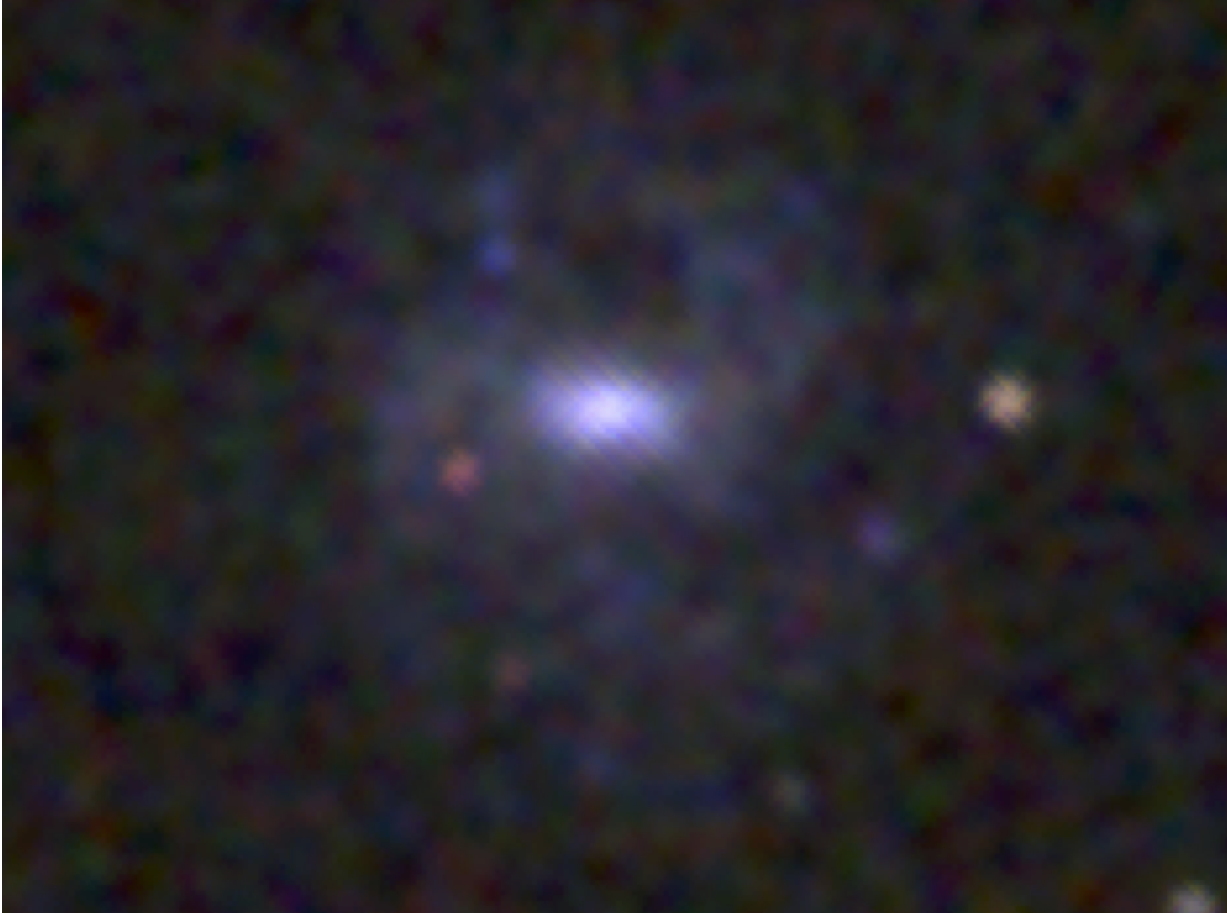 To make the observations, the team used NASA’s Chandra X-ray Observatory and the 6.5-meter Clay Telescope in Chile. RGG 118 was originally found through the Sloan Digital Sky Survey.

Researchers figured out the mass of the black hole by studying the motion of the gas near the center of the galaxy using visible light data from the Clay Telescope. They used the Chandra data to figure out the brightness of material around the black hole in the X-ray band.

The X-ray luminosity tells astronomers the rate at which the black hole is taking in matter. RGG 118 is consuming material at 1 percent the maximum rate, which matches the properties of other supermassive black holes.

“This little supermassive black hole behaves very much like its bigger, and in some cases much bigger, cousins,” said co-author Amy Reines, a Hubble fellow in the U-M Department of Astronomy. “This tells us black holes grow in a similar way no matter what their size.”

Astronomers don’t yet understand how supermassive black holes form. Some hypothesize that giant clouds of gas serve as their seeds. Others believe they descend from gargantuan stars about 100 times the mass of the sun.

“We have two main ideas for how these supermassive black holes are born,” Gallo said. “This black hole in RGG 118 is serving as a proxy for those in the very early universe and ultimately may help us decide which of the two is right.”

The study is titled, “A ~50,000 solar mass Black Hole in the Nucleus of RGG 118.” It was funded by the National Science Foundation and NASA.