ANN ARBOR—Typical autonomous vehicle sensors are useless on snow-covered roads, but researchers at the University of Michigan and Ford are collaborating on a solution. In Michigan and on U-M’s 32-acre Mcity simulated urban environment, they have conducted what they believe are the industry’s first tests of autonomous vehicles in wintry conditions.

Ford will announce the tests today at the North American International Auto Show at an 11:40 a.m. ET press conference that will be followed by a broader discussion of autonomous vehicles at 2 p.m. U-M’s Edwin Olson, an associate professor of computer science and engineering, will take part in that discussion. Olson and Ryan Eustice, an associate professor of naval architecture and marine engineering as well as electrical engineering and computer science, are the U-M researchers leading this effort with Ford.

“It’s one thing for a car to drive itself in perfect weather. It’s quite another to do the same thing when its sensors cannot sense the road through snow, or when visibility is limited by falling precipitation,” said Jim McBride, Ford’s technical leader for autonomous vehicles, in a statement from Ford. “In Ford’s home state of Michigan, we know weather isn’t always perfect. That’s why we’re conducting testing – for the roughly 70 percent of U.S. residents who live in snowy regions.” 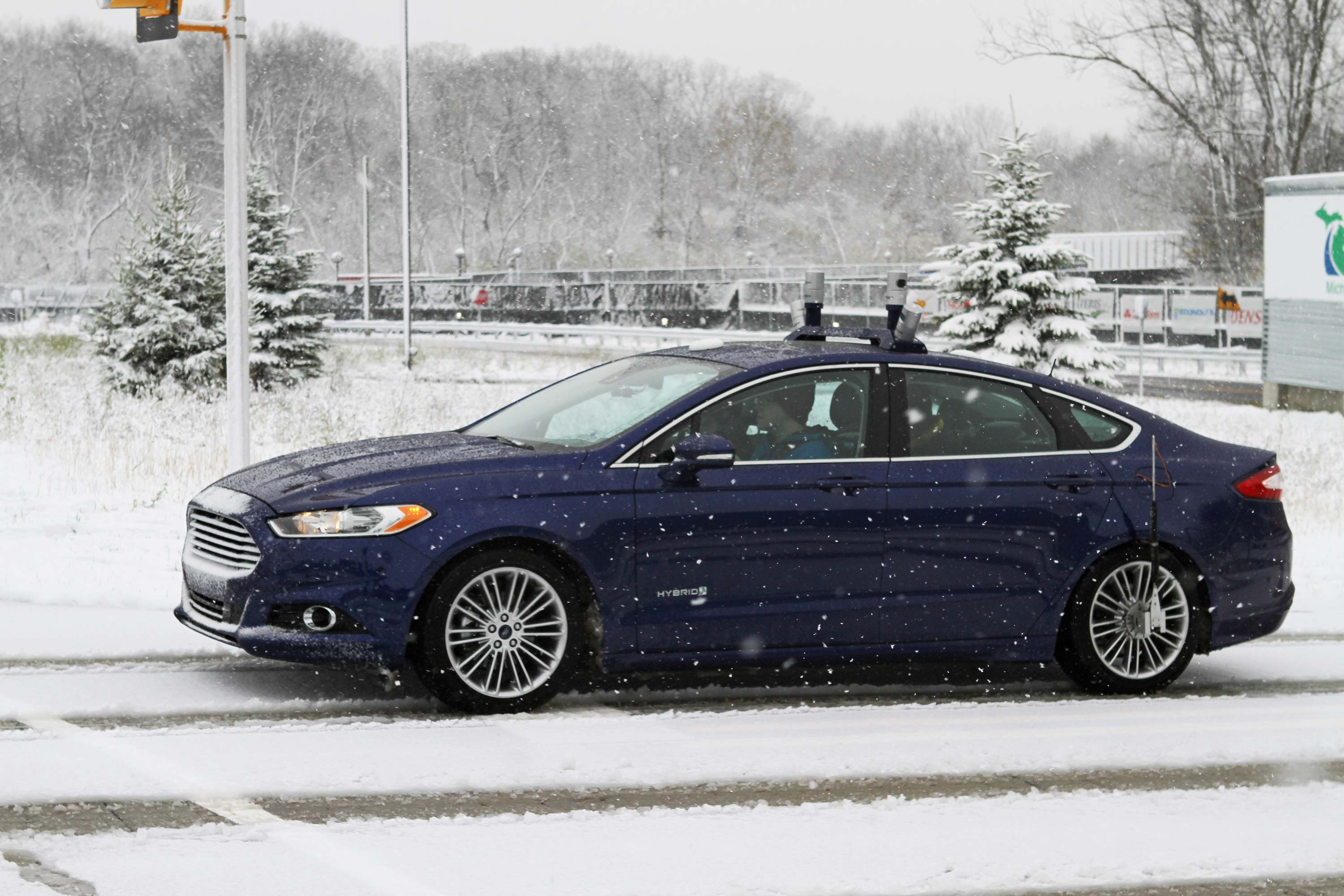 Autonomous vehicle with LiDAR sensors on top. Image credit: FordOne of the keys to safe autonomous driving is for a vehicle to know where it is, not just along a road but within a driving lane. Even being off by a few inches can make a big difference, researchers say. Under sunny skies, Ford’s testbed autonomous Fusion Hybrid sedans rely on LiDAR sensors that can pinpoint lane location with centimeter accuracy. LiDAR emits short pulses of laser light to precisely allow the vehicle to create a real-time, high-definition 3D image of what’s around it.

However, LiDAR cannot see the road when snow obstructs it from view – like during inclement weather or in high-density traffic, according to a Ford statement. The same is true when the sensor lens is covered by snow, grime or debris. 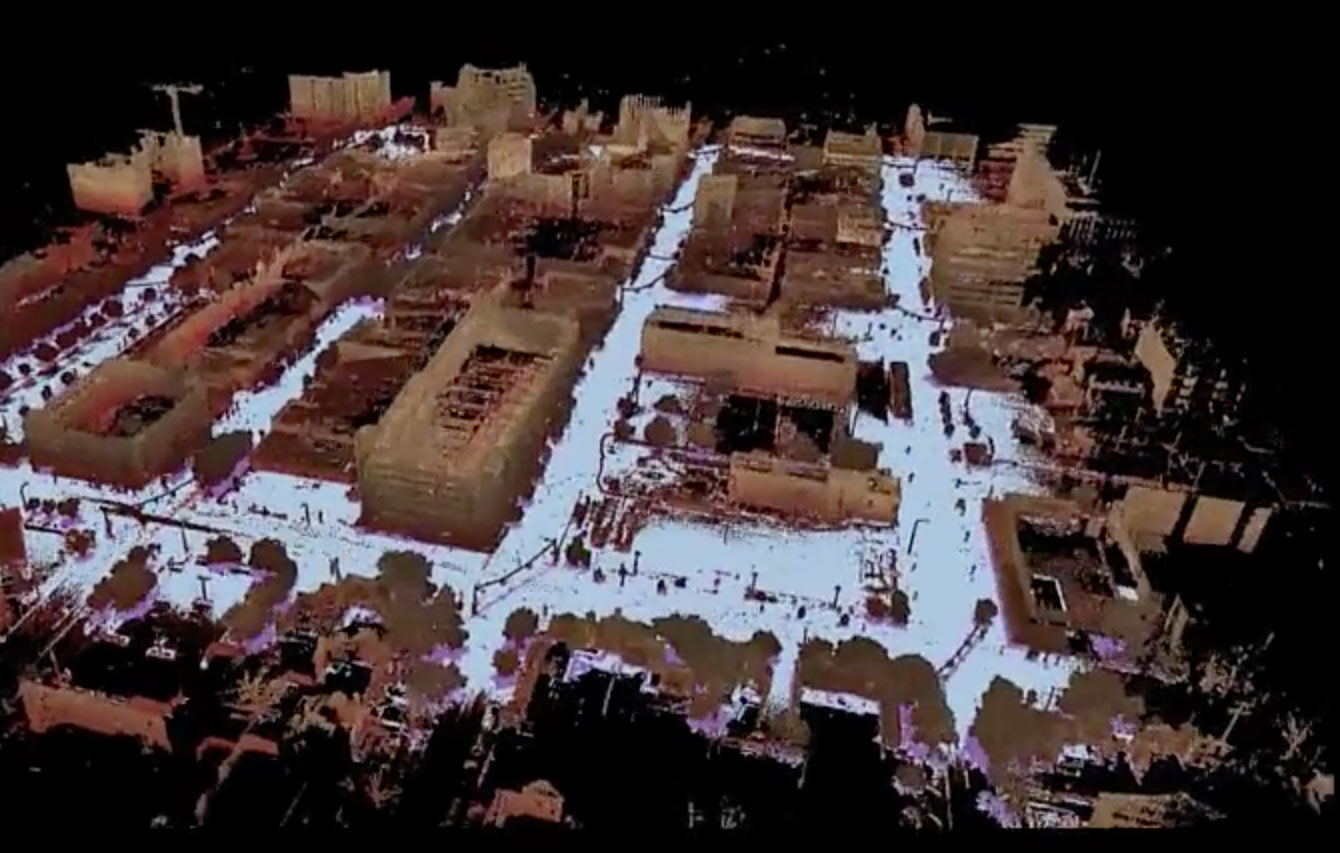 A LiDAR image of Ann Arbor in snow. Image credit: Ryan EusticeThe solution Ford and U-M are working on involves high-resolution 3D maps – complete with information about the road and what’s above it, including road markings, signs, geography, landmarks and topography. U-M researchers have developed these maps and Ford’s test vehicles are equipped with them.

“Maps developed by other companies don’t always work in snow-covered landscapes. The ones developed by Ford and the University of Michigan do,” Eustice said. “The maps we create contain useful information about the 3D environment around the car, allowing it to localize even with a blanket of snow covering the ground.”

The autonomous vehicles create the maps while driving the test environment in favorable weather. Technologies automatically annotate features like traffic signs, trees and buildings later. Then, when the vehicles cannot see the ground, they detect above-ground landmarks to pinpoint themselves on the map, which they then use to drive successfully.

“The vehicle’s normal safety systems, like electronic stability control and traction control, which often are used on slippery winter roads, worked perfectly alongside the autonomous driving software,” McBride said. “We eventually want our autonomous vehicles to detect deteriorating conditions, decide whether it’s safe to keep driving, and if so, for how long.”

“It’s exciting to take these first steps toward autonomous cars that work in foul weather,” Olson said. “This achievement is a superb example of what U-M and Ford can achieve by working together.”