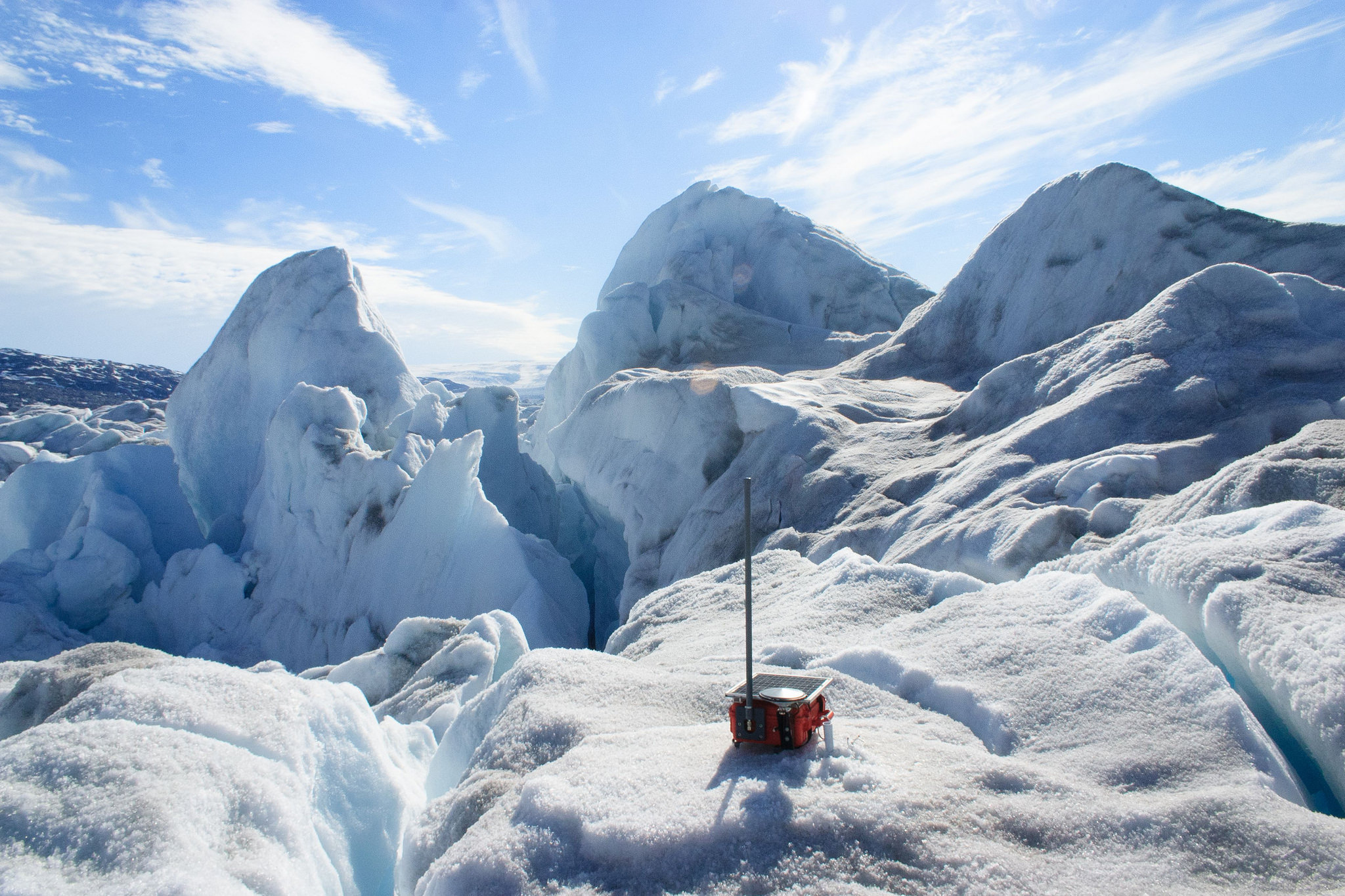 One of the 20 GPS sensors deployed on Helheim Glacier’s chaotic surface. Image credit: Alistair Everett, Swansea UniversityANN ARBOR—The relentless flow of a glacier may seem unstoppable, but a team of researchers from the United Kingdom and the U.S. has shown that during some calving events—when an iceberg breaks off into the ocean—the glacier moves rapidly backward and downward, causing the characteristic glacial earthquakes which until now have been poorly understood.

This new insight into glacier behavior, gained by combining field observations in Greenland with laboratory calving experiments, should enable scientists to measure glacier calving remotely and will improve the reliability of models that predict future sea-level rise in a warming climate.

The research was published June 25 in Science Express. The lead author is Tavi Murray of Swansea University. Co-authors include University of Michigan’s L. Mac Cathles, an assistant professor in the Department of Earth and Environmental Sciences and the Department of Atmospheric, Oceanic and Space Sciences and a postdoctoral fellow in the Michigan Society of Fellows.

The Greenland ice sheet is an important contributor to global sea level, and nearly half of the ice sheet’s annual mass loss occurs through the calving of icebergs to the ocean. Glacial earthquakes have increased sevenfold in the last two decades and have been migrating north, suggesting an increase in rates of mass loss from the ice sheet through calving.

“Our new understanding is a crucial step toward developing tools to remotely measure the mass loss that occurs when icebergs break off ice sheets,” Cathles said. “Combining field observations with laboratory measurements from scaled-model calving experiments provided insights into the dynamics of calving and glacial earthquakes that would not have otherwise been possible.”

This high-speed video shows the capsize of a model iceberg with a width-to-height ratio of 0.22. The iceberg is 20.3 cm in height and the video has been slowed down by 5x. Data taken from this video is featured in the article “Reverse glacier motion during iceberg calving and the cause of glacial earthquakes”, which was published in the journal Science, June 2015. Burton Lab, Emory University.

Helheim Glacier is one of the largest glaciers in southeast Greenland. At 6 kilometers (3.7 miles) wide and more than 200 kilometers (124.3 miles) long, it can flow as fast as 30 meters (98 feet) a day. Icebergs calving from Helheim Glacier have been measured at up to 4 kilometers (2.5 miles) across, with a volume of about 1.25 cubic kilometers (0.3 cubic miles).

During summer 2013, researchers from Swansea, Newcastle and Sheffield universities installed a robust wireless network of Global Positioning System devices on the chaotic surface of Helheim to measure velocity and displacement of the glacier surface. 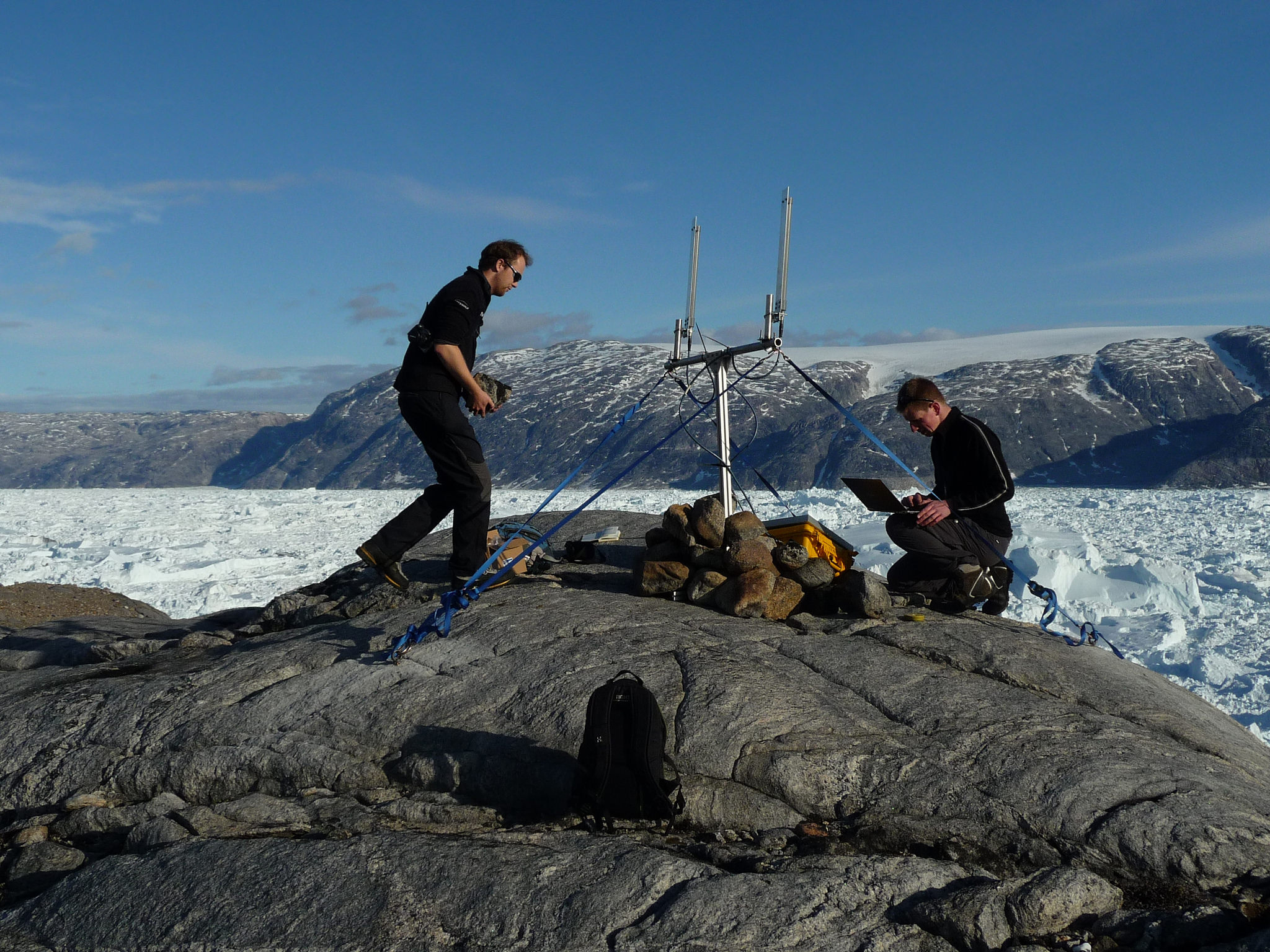 Researchers prepare the GPS network receiving station on the north side of Helheim Glacier. Image credit: Stuart Edwards, Newcastle UniversityWith U.S. collaborators from U-M, Columbia University and Emory University, earthquake data from the Global Seismographic Network and scaled-down models in water tanks were used to explain the unexpected movements of the glacier in the minutes surrounding the calving events.

“We were really surprised to see the glacier flowing backward in our GPS data. The motion happens every time a large iceberg is calved and a glacial earthquake is produced,” said Swansea’s Murray. “A theoretical model for the earthquakes and the laboratory experiments has allowed us to explain the backward and downward movement.”

U-M’s Cathles helped design and run the laboratory experiments of iceberg calving presented in the paper. The international collaboration grew out of a conversation that Cathles and Murray had at an International Glaciological Society meeting in Chamonix, France, last summer.

“We both presented in the same session and realized that I was measuring in the lab a very similar signal to what Professor Murray was observing in the field,” Cathles said. “That started a year-long collaboration in which the paper’s co-authors talked regularly and collectively developed a model to explain the GPS observations and a deeper understanding of how glacial earthquakes are generated during an iceberg calving event.”

Understanding this glacier behavior and the associated glacial earthquakes is a crucial step toward remote measurement of calving events and their contribution to sea-level change. This tool has the potential to provide unprecedented global, near-real-time estimates of iceberg loss from the ice sheet.

The research was supported by the U.K. Natural Environment Research Council, the U.S. National Science Foundation and the Climate Change Consortium of Wales and Thales U.K.