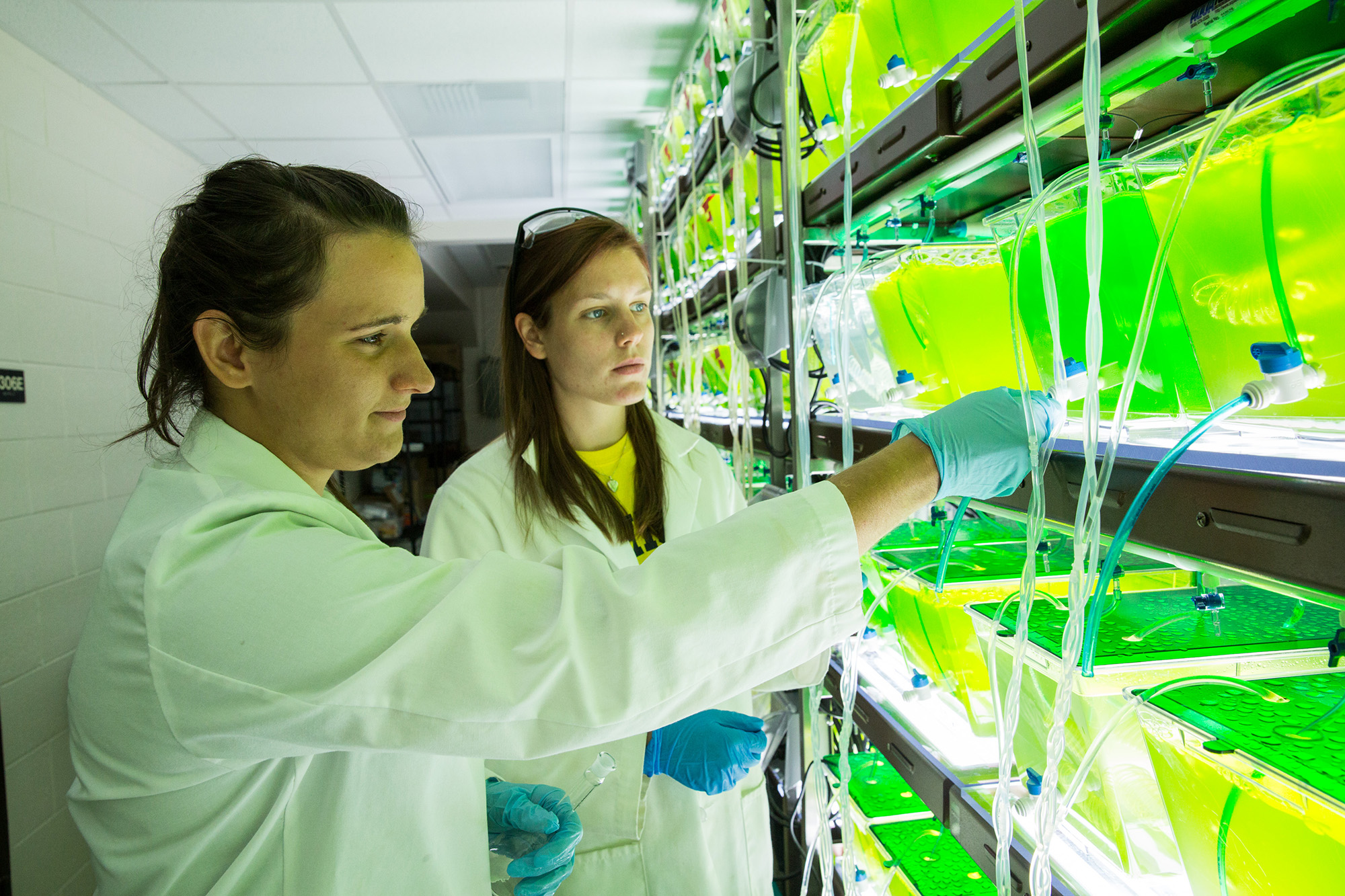 Two University of Michigan undergraduates sample algae from an experiment that will determine if species diversity can enhance the production of algal biofuels. Image credit: Bradley J. CardinaleANN ARBOR—A new study of the complex interplay between organisms and their environment shows that biodiversity—the variety of organisms living on Earth—is even more important to the healthy functioning of ecosystems than previously thought.

The findings by a University of Michigan ecologist and his colleagues bolster the view that conservation of biodiversity benefits the plants and animals directly involved, and by extension the human populations that rely on those organisms and ecosystems for food, water and other basic services.

The study is scheduled for publication April 24 in the journal Nature Communications. The lead author is Jonathan Lefcheck of the College of William & Mary’s Virginia Institute of Marine Science. Co-authors include U-M’s Bradley Cardinale of the School of Natural Resources and Environment.

“Many recent studies support the idea that greater biodiversity helps maintain more stable and productive ecosystems, but this conclusion rests mostly on experiments that tested how losing species affects only a single ecosystem process, such as plant growth,” Lefcheck said. “Our study is the first systematic look at how biodiversity affects the suite of interconnected processes that keep ecosystems healthy and functioning.”

The study was conducted as part of a working group established in 2010 by Cardinale at the National Center for Ecological Analysis and Synthesis in Santa Barbara, Calif.

“The goal of our working group was to summarize results from thousands of studies that have examined how loss of biodiversity is altering the productivity and sustainability of ecosystems, as well as their ability to provide people with goods and services,” said Cardinale, a project co-leader.

“Ecosystems clean the water in our rivers and lakes, provide oxygen in the air we breathe, recycle nutrients that help forests grow, and control pests and disease. Our study shows that species conservation helps sustain the variety of ecological processes that underlie all the benefits people get from nature.” 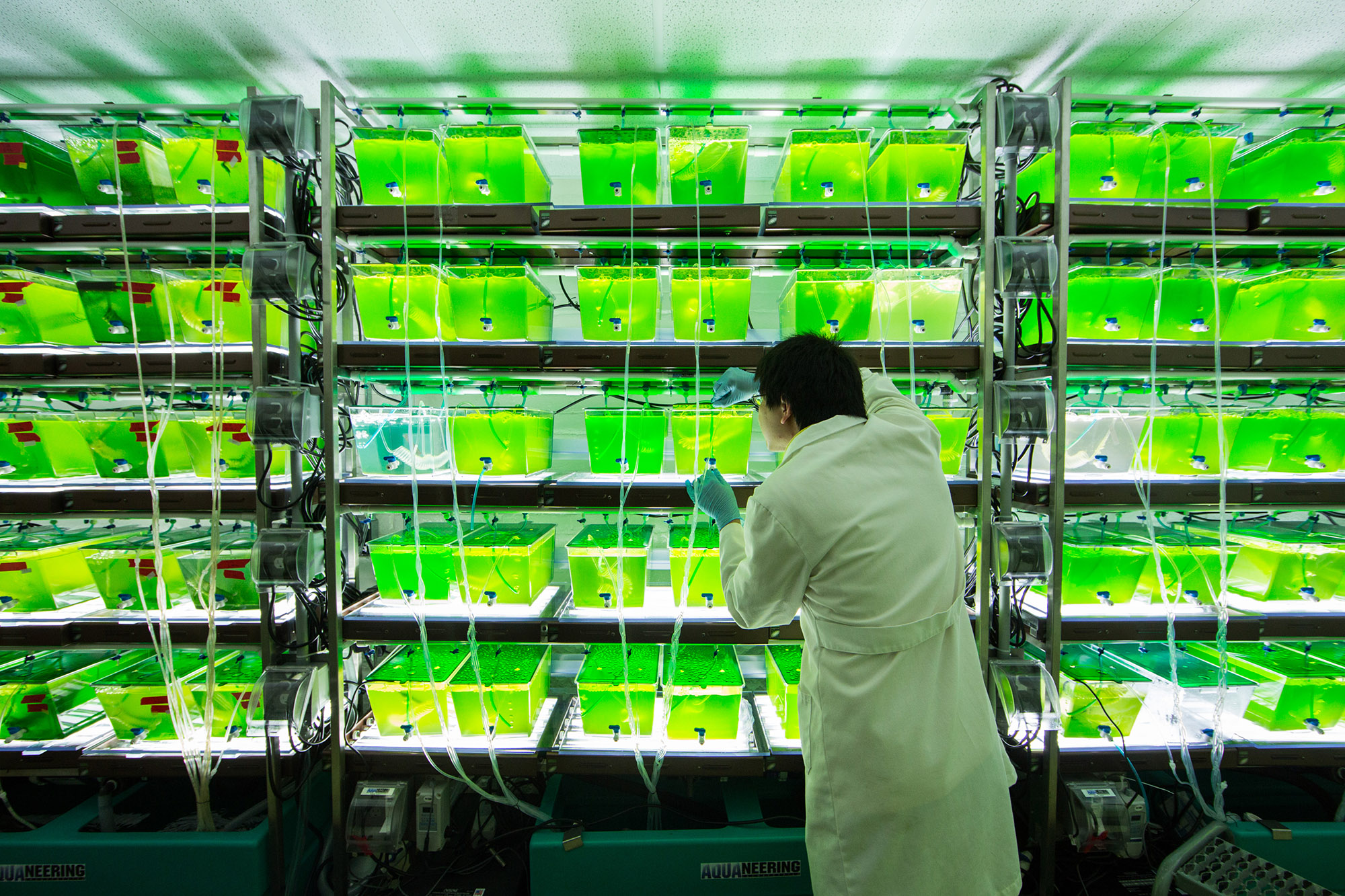 A University of Michigan undergraduate samples algae from an experiment that will determine if species diversity can enhance the production of algal biofuels. Image credit: Bradley J. CardinaleThe researchers examined the relationships between biodiversity and various ecosystem processes by compiling and analyzing the results from 94 experiments conducted around the world. Each experiment involved manipulation of at least three species and the monitoring of two to 12 distinct ecosystem functions—from the accumulation of soil nitrogen to the control of aquatic algae.

The experiments were evenly divided between terrestrial and aquatic habitats. The relationship between biodiversity and multiple ecosystem processes is called multifunctionality.

The results of the team’s synthesis were clear.

“We found that biodiversity generally enhances multiple functions in experimental ecosystems,” Lefcheck said. “In other words, as you consider more aspects of an ecosystem, biodiversity becomes more important: one species cannot do it all.”

Lefcheck’s field research focuses on the seagrass meadows of Chesapeake Bay and the coastal ocean.

“Seagrasses are home to a variety of small animals that perform different jobs. Some control algae that would smother seagrasses,” he said. “Others keep out invasive species. Still others provide food for striped bass and blue crabs that are served on our dinner tables. By conserving this variety of animals we can maximize the health of the grass bed and the benefits to people.”

“Our review of these experiments suggests that, contrary to some prior interpretations, we may have actually underestimated the importance of biodiversity to the functioning of ecosystems in nature,” said co-author Emmett Duffy, director of the Tennenbaum Marine Observatory Network at the Smithsonian institution and co-leader on the project.

Nico Eisenhauer, a co-author from the German Centre of Integrative Biodiversity Research added: “Only with this level of international, cross-system collaboration can we explore global patterns and understand the importance of biodiversity loss for all of humanity.”