Bitter pill: Monarchs, milkweed and self-medication in a changing world

PELLSTON, Mich.—The milkweed plants growing in 40 cube-shaped chambers on a hilltop at the University of Michigan Biological Station provide a glimpse into the future that allows researchers to ask a question: How will monarch butterflies fare?

Carbon dioxide gas is pumped into half of the transparent, plastic-covered boxes to simulate the atmosphere that’s likely to exist more than a century from now if levels of the heat-trapping greenhouse gas continue to rise due to the burning of fossil fuels.

Milkweed plants from the chambers were fed to hundreds of monarch caterpillars this summer. Milkweed is a monarch caterpillar’s only food, satisfying its nutritional needs while providing an invaluable medicinal boost. The plant’s leaves contain a bitter toxin that helps the insects ward off predators and parasites.

But previous work at U-M’s northern Michigan biological outpost, in the laboratory of ecologist Mark Hunter, showed that some species of milkweed produce lower levels of the protective toxins, called cardenolides, when grown under elevated carbon dioxide conditions.

That finding caught the attention of U-M doctoral student Leslie Decker, who with Hunter designed a multi-year follow-up study, underway at the Biological Station, that is the focus of her dissertation in the Department of Ecology and Evolutionary Biology.

“When I heard that, it really set off an alarm,” Decker said. “If toxins that are very active against parasites are decreasing under elevated CO2, what does that mean for the susceptibility of monarchs in the future?”

Most discussions of the monarch’s plight focus on habitat loss: the logging of trees in the Mexican forest where monarchs spend the winter, as well as the loss of wild milkweed plants that sustain them during their annual migration across North America.

The U-M study examines a different type of potential threat. It is one of the first experiments to assess the likely impacts of elevated carbon dioxide levels—the same mounting gases blamed for human-caused climate change—on the health of future monarch populations.

But getting to the answers is not a simple proposition. It required the creation of an experimental system that allows Decker and Hunter to manipulate and measure all the key links in the chain: carbon dioxide levels, toxin concentrations in milkweed leaves, infection by parasites and monarch susceptibility to those parasites. 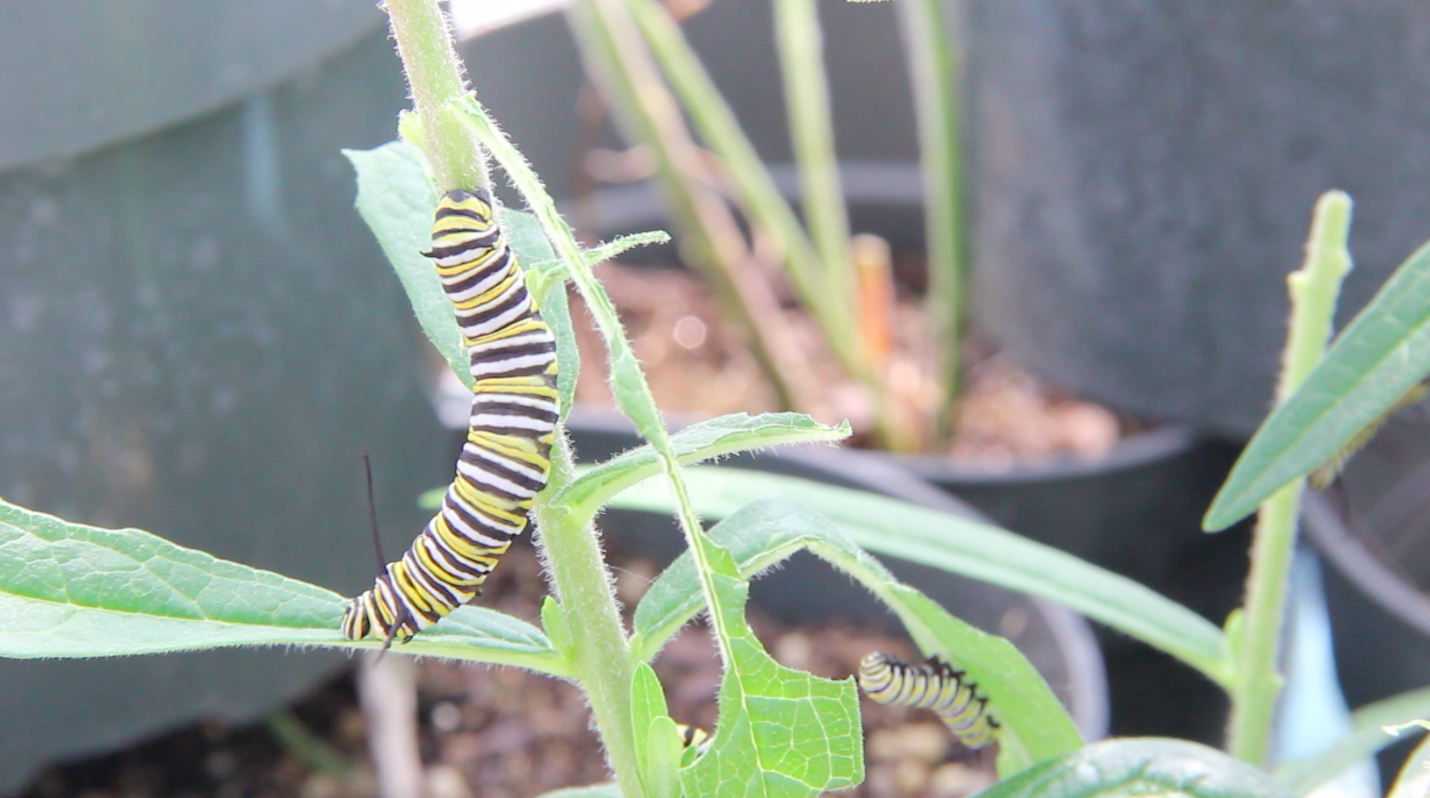 Monarch butterfly caterpillars on milkweed plants at the U-M Biological Station. Image credit: Levi Stroud“It’s a nice little trick that allows us to explore how well the medicine works,” said Hunter, who’s been studying monarchs at the Biological Station for nine years. During that time, he’s seen monarch numbers at the station drop, as they have elsewhere in the Midwest.

By “medicine,” Hunter is referring to the cardenolide toxins in milkweed leaves. In the wild, parasite-infected female monarch butterflies sometimes seek out milkweed plants with high toxin levels and lay their eggs there, a process known as trans-generational self-medication.

“It turns out that many kinds of animals self-medicate,” said Hunter, a professor in the Department of Ecology and Evolutionary Biology. “In other words, they use chemicals in the environment to help them with their own parasites and diseases. And of course, humans have been doing that for a very long time—we still obtain about half of our new pharmaceutical drugs from plants. 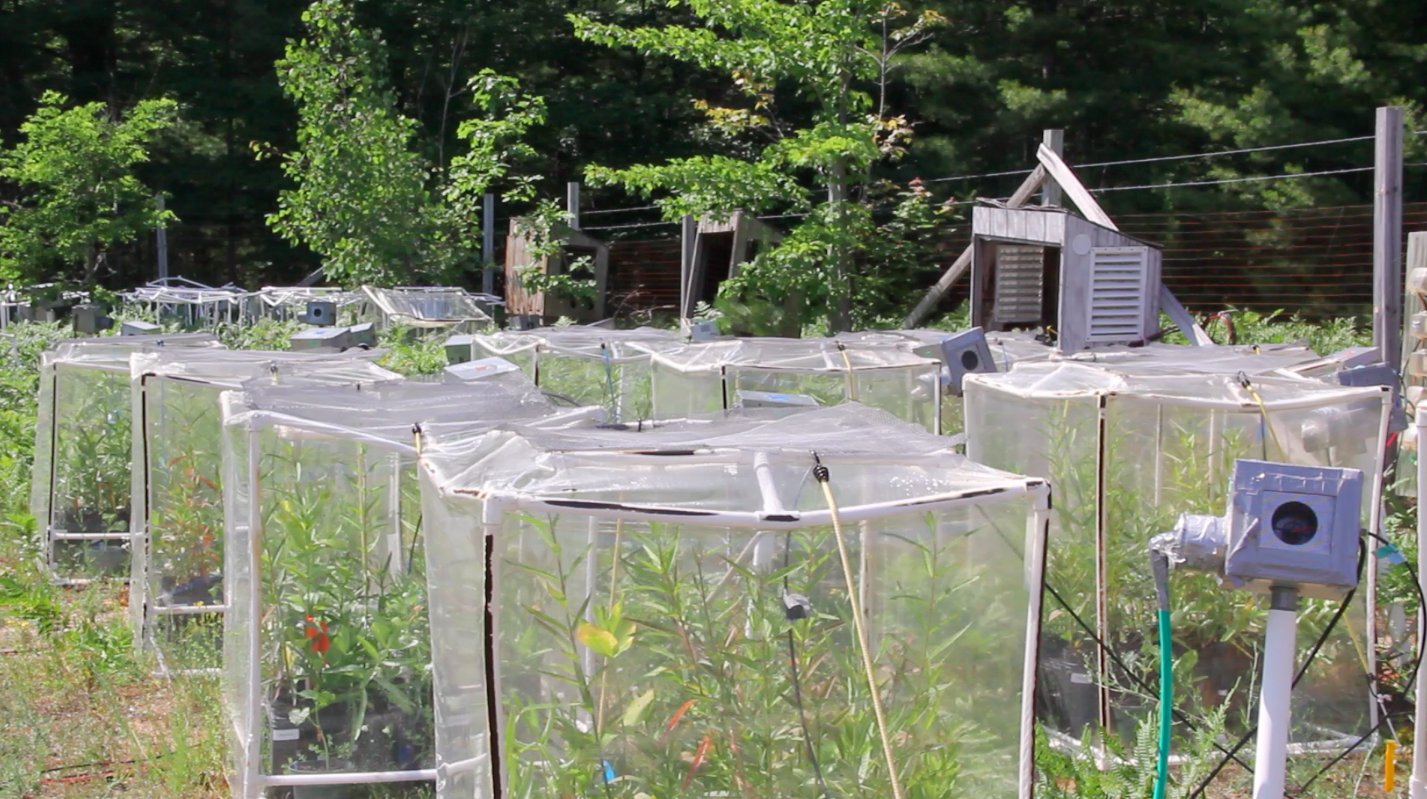 Four species of milkweed plants in growth chambers at the Biological Station. Carbon dioxide gas is pumped into the plastic-covered cubes to study how the plants respond to changes in atmospheric chemistry. Image credit: Levi StroudFour species of milkweed were grown this summer in those PVC-framed Biological Station growth chambers. Half the plants received normal levels of carbon dioxide, around 400 parts per million, and the other half got nearly double that amount. The researchers measured the levels of cardenolide toxins in the various plant tissues, so that they know the exact dose each caterpillar received.

Next to the field with the growth chambers, in a Biological Station building known as the pole barn, the milkweed plants were fed to monarch caterpillars. Each caterpillar got a steady diet of a single milkweed species with known carbon dioxide exposure.

In another room at the pole barn, 3-day-old caterpillars were exposed to carefully controlled doses of a common monarch parasite that’s distantly related to the malaria pathogen. Ophryocystis elektroscirrha is a protozoan that shortens an adult monarch butterfly’s lifespan, impedes its ability to fly and reduces the number of offspring it produces. 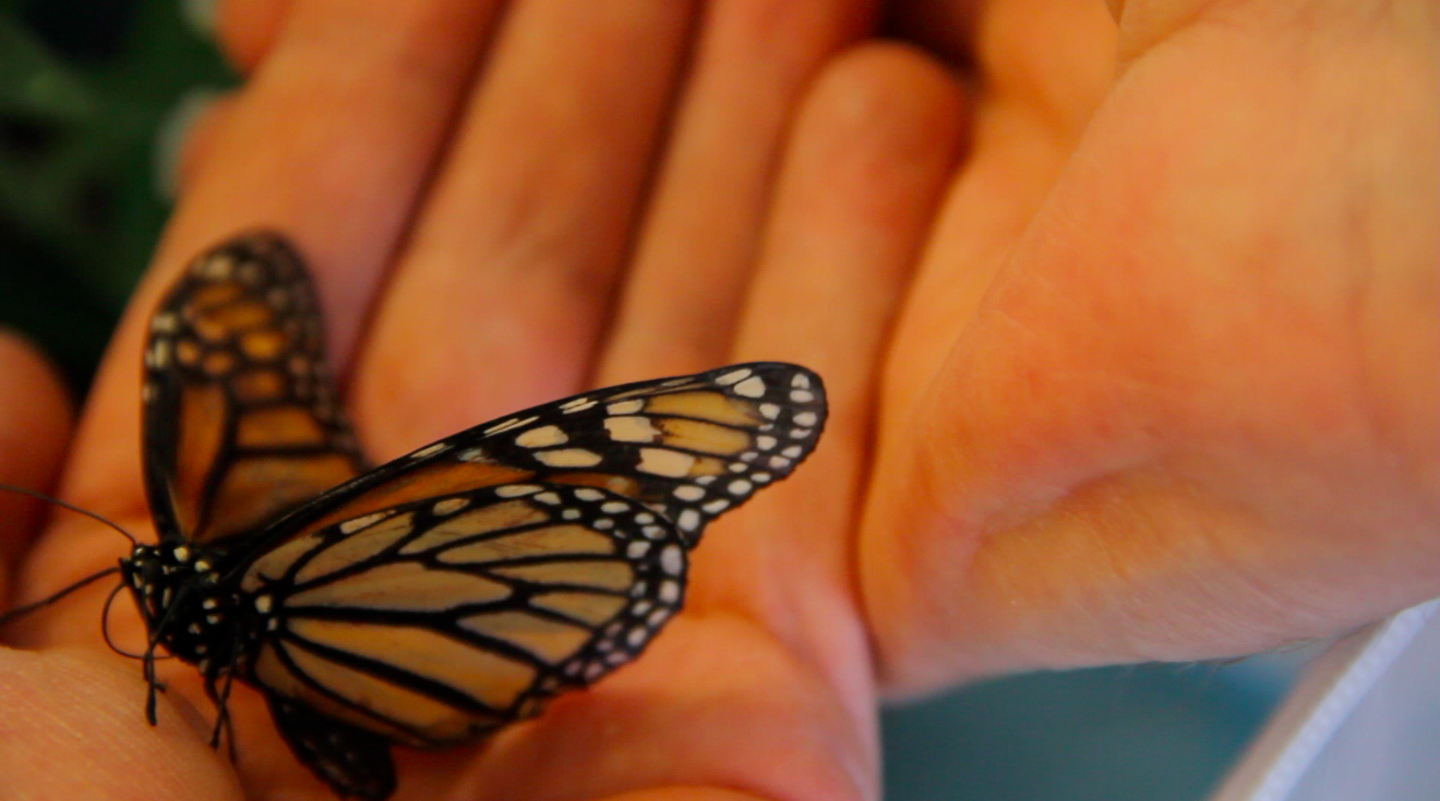 A monarch butterfly at the U-M Biological Station. Image credit: Levi StroudUnder a stereoscopic microscopic, Decker used a tapered glass tube to add 10 tiny, football-shaped parasite spores to a quarter-inch disk of milkweed leaf that she then fed to a caterpillar.

“We know exactly how many spores each caterpillar ate, as well as the exact dose of the milkweed toxin they received,” Hunter said as he removed quarter-inch disks of milkweed leaf from laboratory plants using an old-fashioned hand-held paper punch.

Over about two weeks’ time, the caterpillars grew to a length of about 2 inches, with striking yellow, white and black bands. Then they pupated inside a hard-shelled chrysalis for about 10 days before emerging, transformed, as orange-and-black butterflies.

In Michigan, monarch butterflies typically live for about a month. At their hilltop Biological Station lab this summer, Decker and Hunter raised 480 adult monarch butterflies from eggs. Most of them died by the end of August, and the lifespan of each individual was recorded.

Over the next several months, back in Ann Arbor, Decker will painstakingly count the number of spores on the outside of every butterfly carcass. 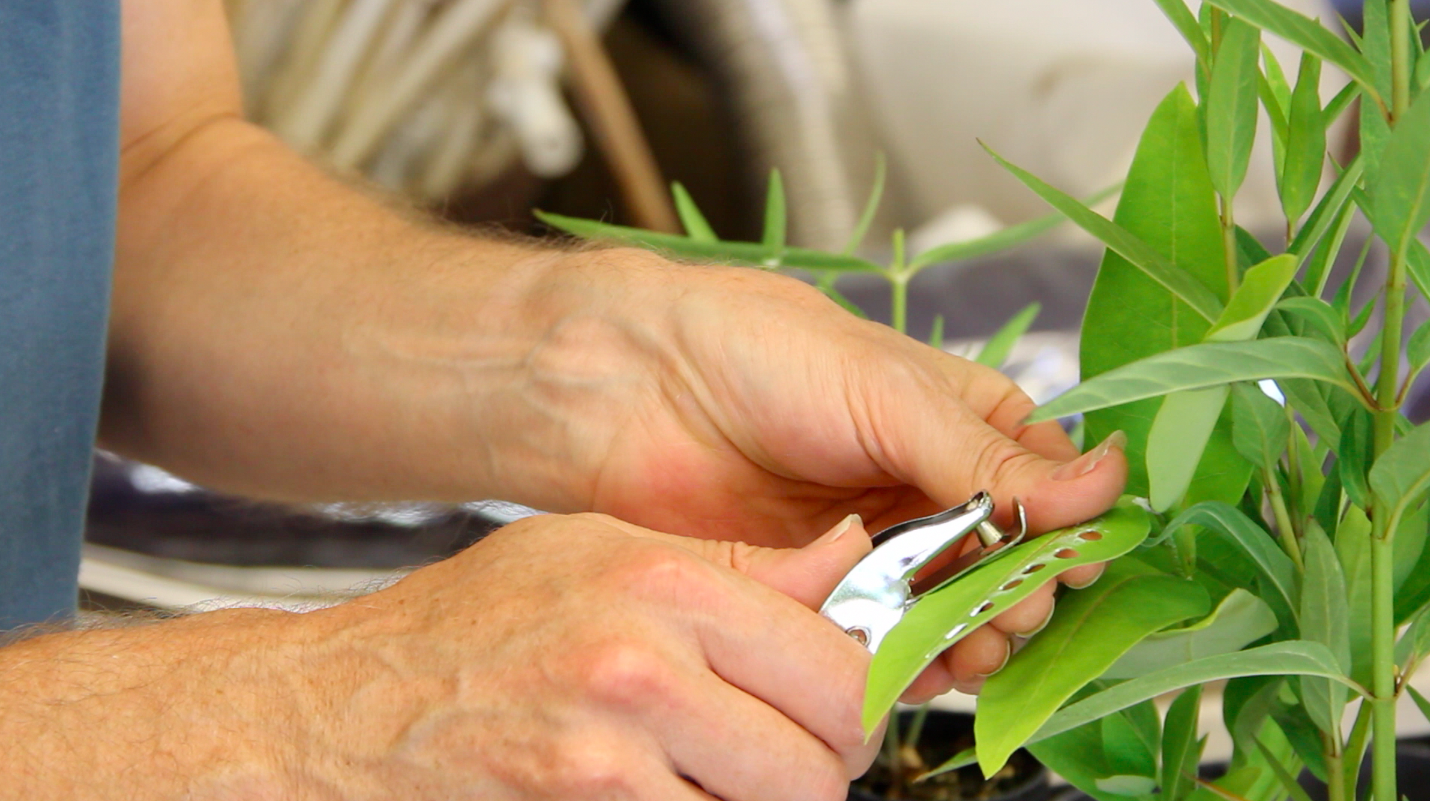 Quarter-inch-diameter disks are removed from milkweed leaves with a paper punch. Parasite spores are placed on the leaf disks, which are then fed to monarch caterpillars. Image credit: Levi StroudTaken together, the various pieces of data will enable the researchers to determine how changes in atmospheric carbon dioxide levels altered toxin concentrations in the four milkweed species and, in turn, how exposure to those plants affected the monarch’s life span and its susceptibility to disease.

“This is a way determine how elevated CO2 changes the chemistry of these plants and how those changes work their way up the food chain,” Decker said. “At the same time, a lot of people reared monarch butterflies as children and still have a sentimental attachment to them. So our work may motivate some people to care more about the ways global change is altering our world.”

This summer was the second field season for the project, with two more to go. The study is funded by a grant from the U-M Department of Ecology and Evolutionary Biology and a U-M Biological Station graduate student fellowship.

If the study reveals that a certain species of milkweed could help future generations of monarchs battle parasites, it might be possible to fashion a management plan that calls for planting the beneficial milkweed species to help heavily infected monarch populations, Decker said.

The U-M Biological Station is in Emmet County, at the northernmost tip of Michigan’s Lower Peninsula. Emmet County is home to four of the 12 species of milkweed that grow in Michigan, and it once held North America’s highest concentration of the plants, according to Hunter. During World War II, the area became the nation’s picking and processing center for milkweed floss, which was used in military life vests.

Hunter said the number of monarchs at the Biological Station has declined over the nine years he’s been studying them. In 2013, not a single monarch was observed at the station, though they’ve returned during the last two summers.

“What we’re seeing here is part of a regional decline in the Upper Midwest that seems to be tied to the loss of milkweed plants around the edges of agricultural fields,” he said. “When milkweed disappears, so do the monarchs.”