Blowing the whistle on bad behavior takes more than guts 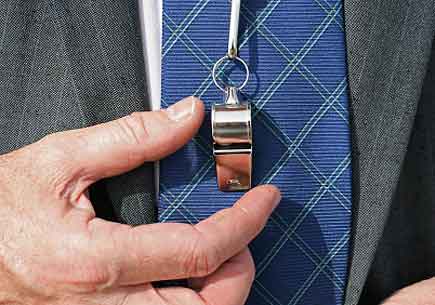 ANN ARBOR—Our work environments play a bigger role than previously thought when it comes to reporting unethical behavior, according to University of Michigan researcher.

“Our findings contradict conventional wisdom that the personal characteristics of an employee drive his or her decision to speak up,” said David Mayer, assistant professor of management and organizations at U-M’s Ross School of Business.

The research found that the social environment—namely, one’s supervisor and co-workers—plays a critical role in an employee’s decision to speak up about wrongdoing.

In the past decade, we have witnessed many ethical failures from leaders of companies such as Enron, Qualcomm and Fannie Mae. The harsh reality is that those who speak up about unethical conduct are often ignored, or worse, retaliated against, Mayer said.

Given the risks associated with blowing the whistle, when an employee witnesses unethical behavior will he or she report it?

Mayer and his co-authors conducted three studies. In the first, they collected data from employees in a for-profit, multinational company headquartered in the United States. They surveyed employees about whether their boss and co-workers were ethical, as well as the likelihood they would speak up if they witnessed wrongdoing.

If either the employees’ supervisor or co-workers were rated as being low on ethicality, employees were significantly less likely to report. Employees needed to believe that both their supervisor and co-workers were ethical in order to be more likely to say they would report unethical behavior.

“There are two primary reasons that people failed to speak up,” Mayer said. “One is a feeling of futility and the other is a fear of retaliation whether being fired, demoted or ostracized. You can be retaliated against by your boss or your peers so there is a big risk in speaking up.”

Because it is so difficult to speak up, society rewards those who do, such as Sherron Watkins (Enron), Coleen Rowley (FBI) and Cynthia Cooper (WorldCom)—whistleblowers who were on the cover of Time’s Person of the Year issue in 2002.

The second study explored a sample of individuals who had witnessed behavior that violated their company’s code of ethical conduct and either had or had not reported that misconduct to management. Many of these transgressions were serious, such as sexual harassment, giving or accepting bribes or kickbacks, falsifying financial records, and discrimination.

Looking at data from more than 30,000 employees in 16 manufacturing and technology firms, the study found that about 20 percent, or 6,000 employees, said they witnessed behavior that violated their company’s code of ethical conduct. Half of those employees reported the behavior to management.

In the third study, participants were told that they would work on a task virtually with four other individuals—three co-workers and a supervisor—who sent participants pre-programmed messages.

They were asked to evaluate whether a company should go into a new market and were not allowed to use any outside materials. Participants received one of two messages from their supervisor: either that they should make sure not to break any rules or one telling them to do the job well.

Part way through the project, one of the “co-workers” sent an instant message saying he used the Internet to help the team, which was in clear violation of the rules. The other co-workers’ responses, either for or against the conduct, were sent out via instant message.

Participants were later asked if any issues came up. Nearly half, or 47 percent, of participants reported the unethical behavior. The results from this study were almost identical to the second study.

The findings suggest that although the ethicality of one’s supervisor matters, co-workers must model the same ethical behavior if we want employees who witness unethical conduct to report it to management, Mayer said.

“We are social animals and we pay attention to what others do—especially when engaging in a risky behavior like whistle-blowing at work,” he said.