Building a stronger Haiti with chocolate 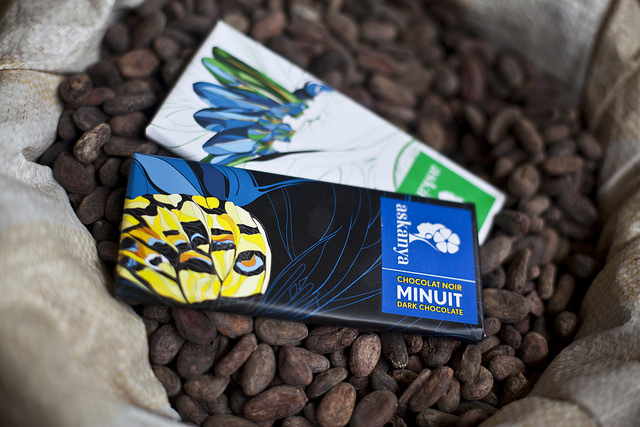 ANN ARBOR—A University of Michigan alum and Haiti native is churning out better futures for residents of her home country. And she’s doing it with chocolate.

Corinne Joachim Sanon has slogged through floodwaters, hauled concrete, hired, fired and haggled to build a system that coaxes thousands of artfully wrapped, high-end chocolate bars from a factory she designed herself in the Haitian border town of Ouanaminthe. She can tell you about harvesting, fermenting, drying, cracking, conching, tempering and all the other steps that turn fresh cacao pods into chocolate sold at Haitian hotels, online and at high-end shops in major U.S. cities.

But her story is not about chocolate. When she walked away from a six-figure consulting career in New York, she wasn’t thinking about chocolate at all. Being Haitian, she was thinking about her home country, where most people live in grinding poverty and jobs are nearly as scarce as indoor plumbing or electricity. Being an engineer, the University of Michigan industrial operations and engineering grad believed she could use her skills to make a difference.

“I was one of the lucky ones, far luckier than the majority of Haitians,” she said. “I went to a good school and a great university and have a great life. But I didn’t want to wake up at 60 having never tried to do anything for Haiti.”

Two years later, Askanya is a growing company that employs dozens of workers and works with thousands of farmers. Sanon divides her time between the company’s distribution center in Brooklyn and its factory in Ouanaminthe.

But while chocolate is Sanon’s product, it’s not her purpose. Drawing from her background as an industrial operations engineer, she started out by looking for a way to make the crops produced in Haiti generate more benefit for more Haitians—from small farmers in long-ignored rural areas to city dwellers struggling to find work. She invested her own savings and did extensive research.

“My goal was to create blue-collar jobs in the Haitian countryside, and at first I was kind of crop agnostic,” she said. “I thought about oranges, but then I realized that Haiti grows some of the best cacao in the world. I thought, why not go from the raw cacao bean to the finished bar, all in Haiti. We can have a local product and transform the economy.”

Sanon knew that setting up a cacao harvesting and processing operation in one of the world’s toughest places wouldn’t be easy. Electricity is expensive and intermittent at best. Roads are poor, especially in the remote areas where cacao is grown.

Government regulations can be stifling and arcane property laws make it difficult to even secure a site. Not to mention the seemingly unending string of manmade and natural disasters that plague the country, most recently Hurricane Matthew in 2016. 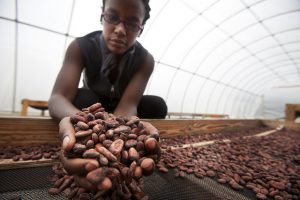 Corinne Joachim-Sanon, founder of the Askanya Chocolate Factory sifts through the dry beans in the drying facility outside of Ouanaminthe. Image credit: Marcin Szczepanski

People had tried bean-to-bar in other developing countries, like Grenada and Ecuador. But not in Haiti. While the country has exported raw cacao beans for decades, no one had ever made finished bars.

Sanon was confident that she would succeed where no one else had. She had years of experience in industrial and operations engineering, a field that designs systems to solve problems in difficult environments. Haiti was simply a different environment. And having grown up there, Sanon knew it well.

“Engineers like Corinne have to understand this whole world outside the core equations. And there’s something exciting about that. Whatever you care about, you can take this set of industrial and operations engineering tools and use it to make a difference,” she said. “So it’s not surprising to me that this is something that an industrial engineer would choose to do. Plus, there’s chocolate.”

Sanon worked with chocolate consultants to design the self-contained harvesting, processing and production system that today stretches from isolated farming villages in the Haitian mountains all the way to Askanya’s factory in town of Ouanaminthe. It’s not glamorous or high-tech—Askanya runs on hired pickup trucks, hard labor and endless patience. But for Sanon, engineering isn’t about machines or technology. It’s about designing the best system and making it work, day in and day out.

“I’m a U-M IOE engineer—that’s how we are, right?” she said. “We’re tough. We try hard. We try different ways until it works.”