Calculating the best shapes for things to come

Maximizing the performance and efficiency of structures—everything from bridges to computer components—can be achieved by design with a new algorithm developed by researchers at the University of Michigan and Northeastern University.

It’s an advancement likely to benefit a host of industries where costly and time-consuming trial-and-error testing is necessary to determine the optimal design. As an example, look at the current U.S. infrastructure challenge—a looming $2.5 trillion backlog that will need to be addressed with taxpayer dollars. 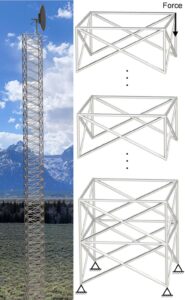 An antenna tower is a classic truss structure. The new algorithm could help design towers that are lighter and less expensive to build. In addition, the algorithm can design structures to maximize their stiffness for carrying a given load, design the shape of fluid channels to minimize pressure loss, and create shapes for heat transfer enhancement. Image credit: Changyu Deng, Wei Lu Research Group

Planners searching for the best way to design a new bridge need to answer a string of key questions. How many pillars are needed? What diameter do those pillars need to be? What should the radius of the bridge’s arch be? The new algorithm can determine the combination that gives the highest load capacity with lowest cost.

The team tested their algorithm in four optimization scenarios: designing structures to maximize their stiffness for carrying a given load, designing the shape of fluid channels to minimize pressure loss, creating shapes for heat transfer enhancement, and minimizing the material of complex trusses for load bearing. The new algorithm reduced the computational time needed to reach the best solution by roughly 100 to 100,000 times over traditional approaches. In addition, it outperformed all other state-of-the-art algorithms.

The new algorithm plays in a space called topology optimization—how best to distribute materials within a given space to get the desired results.

“If you really want to design something rationally, you’re talking about a large number of calculations, and doing those can be difficult with time and cost considerations,” Lu said. “Our algorithm can reduce the calculations and facilitate the optimization process.”

Heat sinks—components that transfer heat from a computer’s central processing unit to the outside air—represent another shape that can be optimized via U-M’s algorithm. Traditional heat sinks have been designed with multiple parallel fins along surfaces. Topology optimization shows a more efficient heat transfer is achieved when those fins are shaped like trees.

The new algorithm uses what are known as “nongradient” optimization methods, an advanced approach to optimization problems. Optimization can be imagined as turning all of the variables in a design into a mountainous landscape in which the best design is in the bottom of the lowest valley. Gradient-based optimization slides downhill until it reaches a valley—while easy and fast, it won’t necessarily find the lowest valley.

At times, the optimal shape can be counterintuitive. The design on the left, produced by the new algorithm, represents the best design among the three for copper structures in wax that remove heat from the copper pipe. The gradient-optimized design in the middle and the approximated design on the right would be slower at drawing heat out of the pipes. Image credit: Changyu Deng, Wei Lu Research Group

Nongradient methods jump from mountain to mountain, providing a better sense of the terrain. While versatile, they take a lot of computing resources and need to be accelerated to be feasible for applications. The new algorithm does this by first approximating the system by machine learning and then using a self-directed learning scheme to leap from mountain to mountain in search of that lowest valley.

“This research can dramatically accelerate non-gradient optimizers for topology optimization to make nongradient methods feasible. In this way, more complicated problems can be tackled,” Deng said.

Beyond infrastructure and cost issues, the algorithm can be utilized for any shape optimization projects where maximizing performance is the goal. Future applications include optimizing battery electrode morphology, vehicle frames and shells, structures of buildings, and even more complex optimization problems outside of topology optimization.

The research was funded by the National Science Foundation.