Can you tell a marten from a fisher? The challenges of crowdsourced wildlife identification in Michigan 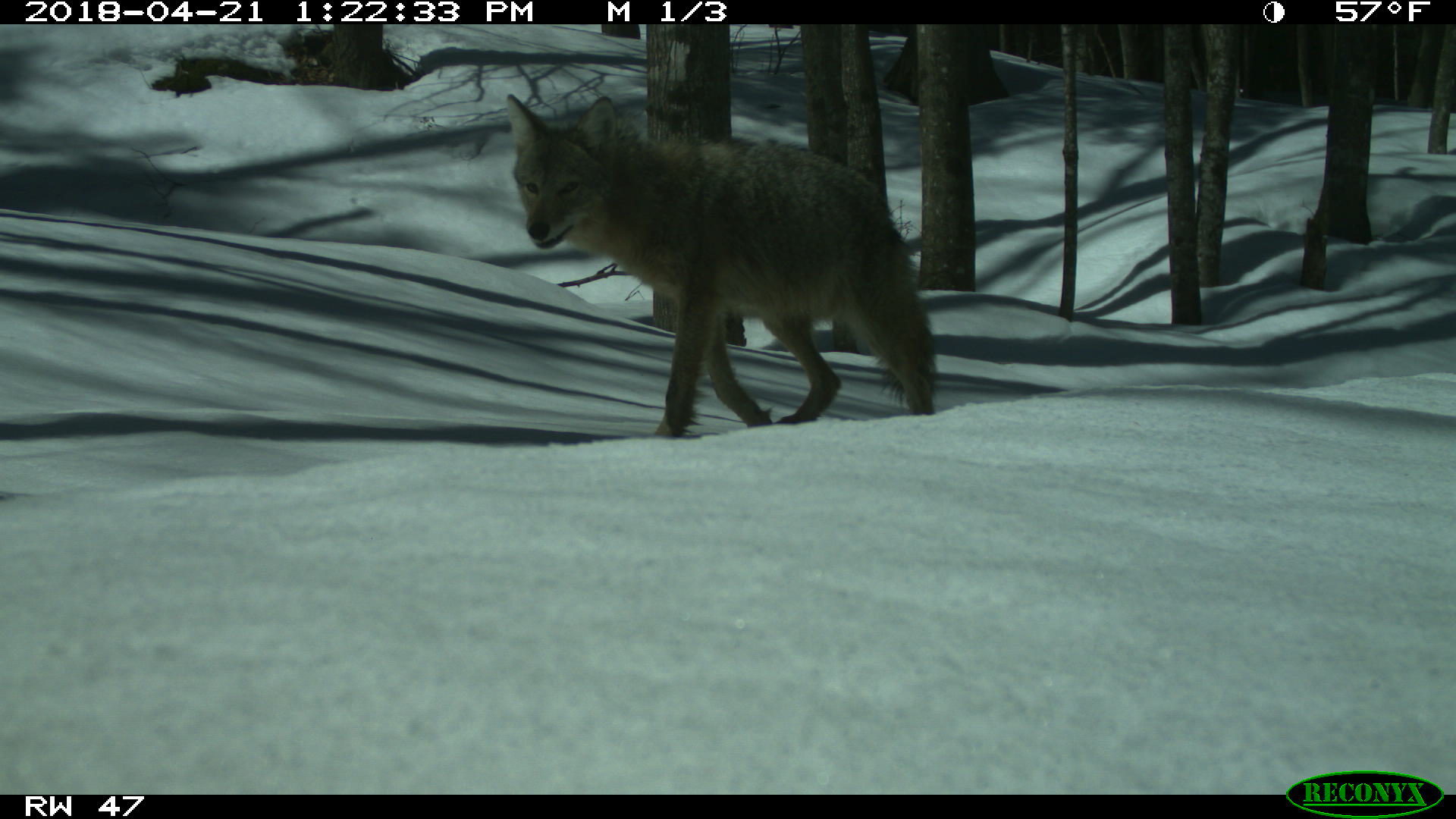 Most people can correctly identify photographs of common animals such as deer, raccoons, skunks and squirrels. 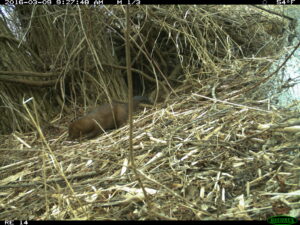 A mink at Shiawassee National Wildlife Refuge in Saginaw County, in Michigan’s Lower Peninsula. Minks are members of the mustelid family of fur-bearing carnivores. In the University of Michigan wildlife study, volunteers had trouble telling apart various mustelids, which also include the fisher, the American marten and weasels. Image credit: University of Michigan Applied Wildlife Ecology Lab.

But can you distinguish a gray wolf from a coyote or correctly identify members of the mustelid family, which includes the American marten, the long-tailed weasel, the fisher and the mink?

Nearly 4,000 citizen scientists, including many K-12 students, participated in a recent University of Michigan study that used hundreds of motion-triggered wildlife cameras in Michigan forests to study the state’s mammals, with an emphasis on community ecology among carnivores.

The digital cameras captured more than 10,000 image sequences, and the volunteers were asked to identify the critters. Crowdsourcing of wildlife identifications from camera surveys has become increasingly common in recent years, but some researchers have raised concerns about the accuracy and usability of public-generated data.

The U-M scientists say their findings reaffirm that—when the studies are properly designed—crowdsourced wildlife identification is a reliable way to lighten a research team’s workload while increasing public participation in science.

In the study, overall accuracy of the volunteer identifications was 97%.

However, the nonexperts had some difficulty distinguishing animals that are similar in appearance, such as the coyotes and gray wolves that coexist in the Upper Peninsula, as well creatures that are rare or infrequently encountered by the general public, such as the mustelids. 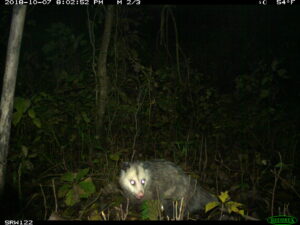 An opossum illuminated by the camera flash in a nighttime photograph at the Shiawassee National Wildlife Refuge in Saginaw County. University of Michigan researchers deployed 273 motion-triggered cameras at three Michigan study areas to photograph the state’s mammals, with a special focus on carnivores and their prey. Image credit: University of Michigan Applied Wildlife Ecology Lab.

“We developed robust protocols that take into account the varying degrees of participant knowledge about wildlife, and those methods helped us ensure data reliability,” said Gabriel Gadsden, first author of the study published online May 24 in the peer-reviewed journal Wildlife Society Bulletin.

“Our hope is that other scientists who perhaps are reluctant to use participatory science because of data-quality concerns will read this paper and be compelled to incorporate some of our methods into their studies,” said Gadsden, who was a research technician at U-M’s Applied Wildlife Ecology Lab when the fieldwork was done. He recently earned a master’s from U-M’s School for Environment and Sustainability.

The wildlife study was conducted at three Michigan sites, two in the Lower Peninsula (the University of Michigan Biological Station in Pellston and the Shiawassee National Wildlife Refuge in Saginaw County) and one in the Upper Peninsula (the Huron Mountain Club).

The researchers deployed 273 cameras across the three study areas and developed a public-science website called Michigan ZoomIN on the Zooniverse Project Builder crowdsourcing platform to help with identification of 10,199 image sequences. Zooniverse has hosted more than 200 projects from various scientific disciplines including astronomy, ecology, physics and history.

“Camera-trap studies generate massive amounts of data that can prove to be a limiting factor in biological monitoring and ecological inquiry. So, engaging the public in our study proved extremely helpful, given the high accuracy of species identification,” said U-M wildlife ecologist Nyeema Harris, the study’s senior author and director of the Applied Wildlife Ecology Lab.

“But this research was never solely about validating participatory science or collecting ecological data. Michigan ZoomIN is also an educational tool to build science literacy and to increase excitement about wildlife,” said Harris, an assistant professor in the Department of Ecology and Evolutionary Biology. 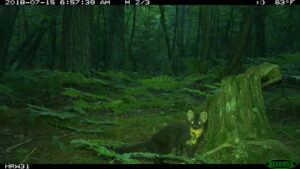 An American marten at the Huron Mountain Club in Michigan’s Upper Peninsula, photographed in the early morning with a white-flash camera. The American marten is a member of the mustelid family of fur-bearing carnivores. In the University of Michigan wildlife study, volunteers had trouble telling apart various mustelids, which also include fishers, weasels and minks. Image credit: University of Michigan Applied Wildlife Ecology Lab.

For the study, the volunteers were given reference photos and written animal descriptions to assist with identification. Each three-image sequence was reviewed by 15 volunteers. To assess the accuracy of the crowdsourced identifications, wildlife experts then reviewed more than 5,000 of the photos.

Two-thirds of the images were identified with complete agreement among all 15 nonexpert viewers. When an identification was not unanimous, various statistical methods were used to reach a consensus on the species ID.

The Huron Mountain Club in the Upper Peninsula is the most remote of the three study areas and has the highest diversity of mammal species, including mustelids. It also had the lowest overall percentage of correct, unanimous species identifications in the U-M study: 62%.

At the Huron Mountain Club, coyotes live alongside the larger gray wolf and the smaller red fox. In the U-M camera-trap study, coyotes were sometimes misidentified as wolves or foxes, while gray wolves were occasionally misidentified as coyotes.

Mustelids had the lowest overall identification accuracy of any animal group in the study. Less than 1% of them were correctly identified by all 15 nonexpert viewers, and even the consensus identifications were correct only 59% of the time.

The low accuracy for mustelid identifications is likely due to the fact that the family includes several species that are difficult for nonexperts to tell apart, Gadsden said.

“Our study found that common species, those with distinguishing features, and generally larger species were most easily identifiable by the public,” he said.

After the fieldwork for this study was conducted, from 2015 through 2017, a fourth Michigan ZoomIN site was added in Detroit.

In addition to Harris and Gadsden, authors of the Wildlife Society Bulletin paper are U-M doctoral candidate Rumaan Malhotra of the U-M Department of Ecology and Evolutionary Biology and the Applied Wildlife Ecology lab, Justin Schell of U-M’s Shapiro Design Lab, and Tiffany Carey, formerly of U-M and now at the National Wildlife Federation.

Funding for the study was provided by the Detroit Zoological Society, the Huron Mountain Wildlife Foundation and the U-M Biological Station.