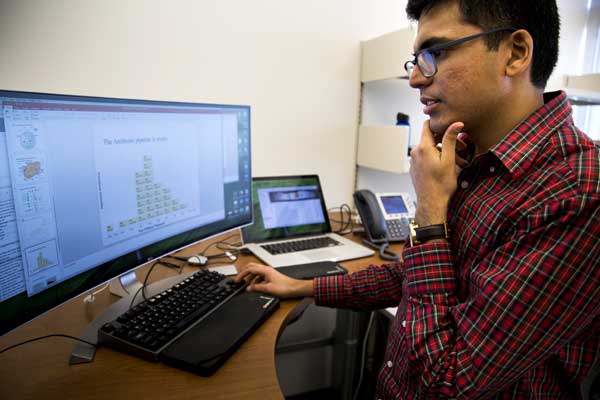 ANN ARBOR—In a study that could provide a roadmap for combatting the rising threat of drug-resistant pathogens, researchers have discovered the specific mechanism the body’s T cells use to kill bacteria.

University of Michigan researchers, in collaboration with colleagues at Harvard University, have discovered a key difference between the way immune cells attack bacteria and the way antibiotics do. Where drugs typically attack a single process within bacteria, T cells attack a host of processes at the same time.

Today, the journal Cell published findings from a team headed by U-M’s Sriram Chandrasekaran and Harvard’s Judy Lieberman. It’s a study with potential implications for drug-resistant pathogens—a problem projected to kill as many as 10 million people annually across the globe by the year 2050.

“We have a huge crisis of antibiotic resistance right now in that most drugs that treat diseases like tuberculosis or listeria, or pathogens like E.coli, are not effective,” said Chandrasekaran, U-M assistant professor of biomedical engineering. “So there is a huge need for figuring out how the immune system does its work. We hope to design a drug that goes after bacteria in a similar way.”

Killer T cells, formally known as cytotoxic lymphocytes, attack infected cells by producing the enzyme granzyme B. How this enzyme triggers death in bacteria has not been well understood, Chandrasekaran said.

“When exposed to granzyme B, the bacteria were unable to develop resistance to the multipronged attack, even after exposure over multiple generations,” Chandrasekaran said. “This enzyme breaks down multiple proteins that are essential for the bacteria to survive. It’s essentially killing several birds with one stone.”

The possible applications of the new findings on T cells run the gamut from the creation of new medications to the repurposing of previously approved drugs in combination to fight infections by mimicking granzyme B.

Chandrasekaran’s team is now looking at how bacteria hide to avoid T-cell attacks. 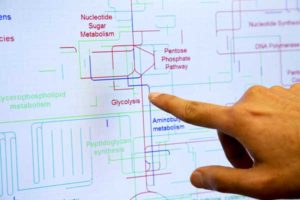 Sriram Chandrasekaran shows a computer model of a pathway for a potential disease or infection in his office. Image credit: Joseph Xu, College of Engineering

And the need for a new approach in some form is dire. World Health Organization officials describe antibiotic resistance as “one of the biggest threats to global health, food security and development today.”

Each year, an estimated 700,000 deaths are linked to antibiotic-resistant bacteria, according to the WHO. Projections show that number skyrocketing to 10 million by 2050.

“We really are facing—if we don’t take action now—a dreadful post-antibiotic apocalypse,” she was quoted saying earlier this month. “I don’t want to say to my children that I didn’t do my best to protect them and their children.”

Of particular concern is the fact that there are few new antibiotics in the pipeline. The heyday of new antibiotics occurred in the 1940s through the 1960s, with releases eventually grinding almost to a halt by the end of the 20th century.

“We’ve reached a point where we take what antibiotics can do for granted, and we can’t do that anymore,” Chandrasekaran said. “We’re taking inspiration from the human immune system, which has been fighting infections for thousands of years.”

The paper is titled, “Granzyme B disrupts central metabolism and protein synthesis in bacteria to promote an immune cell death program.” The research is funded by the National Institutes of Health, Harvard University and the University of Michigan.