Committing to exercise: Facebook updates are a two-edged sword 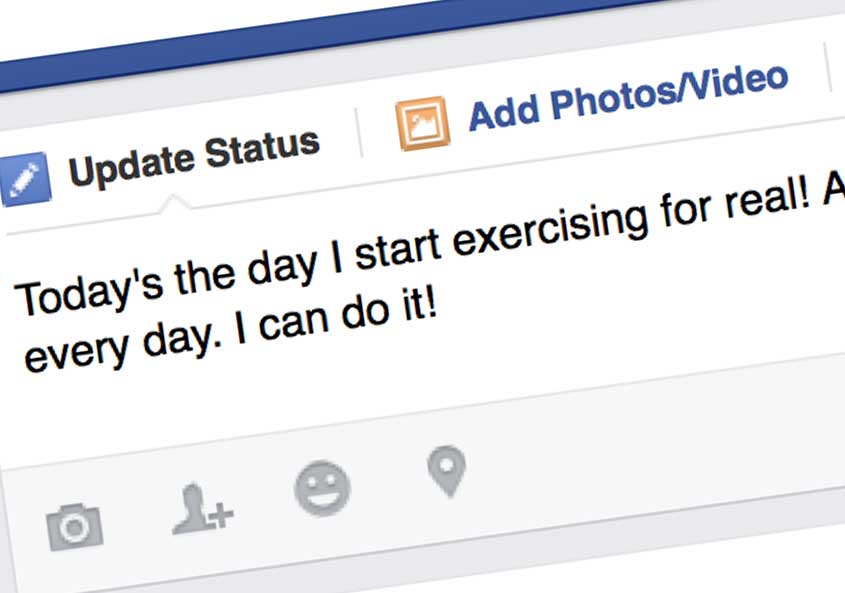 ANN ARBOR—Facebook may be great for making social connections, but perhaps not so much for setting exercise goals.

In a study that explored how technology might help people keep exercise commitments, researchers found that the prospect of workout goals being shared on social media led fewer people to set weekly goals.

At the same time, the sharing led to emotional encouragement, logistical assistance and accountability that may have helped study participants, who all were classified as obese, up their step counts by an average of about a half mile per day.

“One of the most common recommendations for people who want to lose weight is to share their plan with family and friends. The theory is that being accountable to, and encouraged by, their social support system will increase their chances of reaching goals,” said Paul Resnick, the Michael D. Cohen Collegiate Profession of Information at the University of Michigan.

“Public accountability is great, but not if it keeps you from making commitments in the first place,” Resnick said. “We have a ways to go in figuring out how to leverage public commitments in health behavior change.”

In the 12-week, randomized, controlled clinical trial, the researchers gave 165 people classified as obese FitBit pedometers and access to a custom website they had created. At the website, participants could view their steps and choose whether to set a step goal for the following week.

The study put the participants in three categories, and people knew which one they were in. For one group, goals and results (whether they met the goal) were kept private. In another, any goals the participants made were shared in an automatic Facebook update. In the final group, the system updated walkers’ Facebook feeds with both the goal and the outcome (in addition to Facebook sharing, for the last two groups the program sent emails to select groups of supporters that each participant chose).

While it appears that public accountability decreased goal setting, it also had some counteracting positive effects, the researchers said. One was that walkers whose commitments were posted publicly were buoyed by supportive friends and colleagues.

“It was heartwarming to see how many people offered emotional support, or even offers to walk together, watch kids, give rides or let a friend borrow a dog, in response to people sharing their walking goals,” said Sean Munson, assistant professor at the University of Washington. “Our application shared people’s goals along with a request for support. Compared to just a dry post with numbers and statistics, I think their friends knew better how to respond to that request, and I’d like to see more applications adopt this approach.”

Overall, exercise increased for the participants during the study. Their “average improvement in mean daily step count” ranged from 957 in the private group to 1,407 in the announcement with results group. While this might look like setting a commitment led to more exercise, the difference between groups was not statistically significant.

“Enhancing pedometer-based walking programs presents an important opportunity for improving health, especially for those who are obese and sedentary,” said Dr. Caroline Richardson, associate professor of family medicine at the U-M Medical School. “These kinds of interventions are inexpensive and have broad reach. Our study adds to the evidence base that will help us optimize automated, Internet-mediated interventions to promote physical activity on a very large scale.”

It is well established that physical exercise can improve health and wellness and reduce obesity and mortality. However, only about 50 percent of U.S. adults report they achieve the recommended amount of aerobic activity and nearly 30 percent report no regular physical activity.

The study, “Effects of Public Commitments and Accountability in a Technology- Supported Physical Activity Intervention,” was presented recently at the Association for Computing Machinery Special Interest Group on Human-Computer Interaction Conference on Human Factors in Computing Systems. It was supported by funding from the Robert Wood Johnson Foundation and an Intel Fellowship.