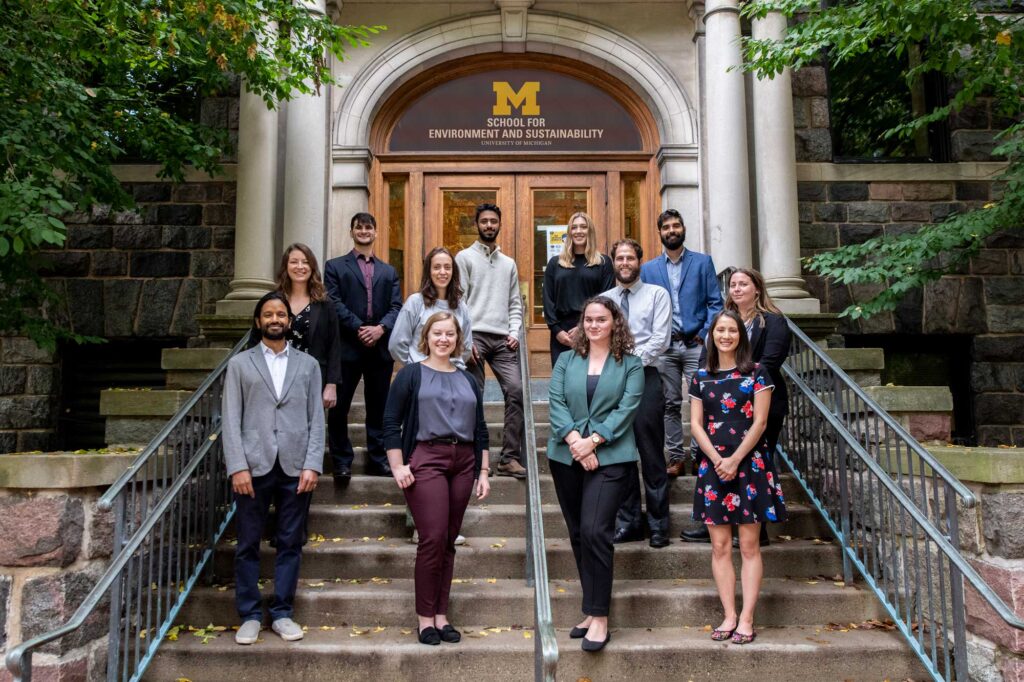 Thirteen University of Michigan graduate students and their faculty adviser are attending the two-week COP26 climate summit in Glasgow, Scotland. The students will observe the negotiations, attend side events and interact with various experts. U-M has sent student delegations to U.N. climate change conferences since 2009.

Lauren Balotin is a dual-degree master’s student at the School of Public Health and the School for Environment and Sustainability. She has interned with the United Nations Framework Convention on Climate Change in its Adaptation division, and she worked with the Washtenaw County Board of Commissioners on its forthcoming climate action plan. Balotin also works with peers on a climate-focused podcast called “AmpliFIRE: Raising Voices Against Rising Temperatures.” Her academic interests focus on helping communities adapt to the health impacts of climate change.

“Climate change is one of the biggest public health crises of our generation. It will have direct impacts on physical health conditions, such as heat-related illnesses and vector-borne diseases, as well as mental and psychosocial health,” she said. “At the same time, it could threaten health care infrastructure and increase stress on health systems. These are very real implications for health and health equity, and we need to be prepared to adapt.

“I first attended the U.N. climate negotiations at COP23, just a few months after the U.S. announced that it would withdraw from the Paris Agreement. It was clear that this decision affected the trajectory of the negotiations, as other parties reacted and subnational U.S. leaders had to step up in the absence of a national climate commitment. A lot has changed now that the U.S. is back in the Paris Agreement, and I’m excited to see how this contributes to momentum for climate action.”

Balotin will attend the second week of the two-week conference.

Evan Gonzalez is a doctoral candidate in the Department of Nuclear Engineering & Radiological Sciences at the College of Engineering. His research focuses on developing improved computational methods for simulating the physics inside of nuclear reactors. In September, he organized the Nuclear Engineering Student Delegation, which brings together nuclear science students from around the country to advocate for nuclear energy and education policies to elected officials in Washington, D.C.

“While I’m convinced nuclear energy has a crucial role to play in decarbonizing our energy grids, I recognize that technological solutions are only part of the battle that remains,” she said. “Even with all of the work that activists have done to convince the world that a climate crisis exists, we need smart public policy options from all nations to address climate change and make sure that the world is habitable for everyone.

“This is an exciting and crucial time to be fighting for climate change, as Congress is on the brink of spending billions of dollars to expand clean energy, and the White House is floating a carbon tax. I’m excited to learn about how other countries are tackling climate change this year at COP26.

Gonzalez is attending the first week of the two-week conference.

Chelsea Johnson is a Master of Science student at the School for Environment and Sustainability specializing in sustainability and development and environmental justice. Her education and research is focused on international climate adaptation, sustainable development, poverty alleviation and food security. Johnson spent summer 2021 working on a research project with the United Nations Development Programme Biodiversity Finance Initiative in Costa Rica, trying to understand how private investment can be leveraged to meet Costa Rican national and international biodiversity goals. She is also the communication coordinator for the student-led club Climate Blue, which organizes the annual U-M delegation to the UNFCCC COP.

“Collectively as policymakers, leaders, scientists and changemakers, we must remember that the most vulnerable among us will be the most affected by climate change,” she said. “Moving forward with this knowledge, we must push for policies that protect these vulnerable populations to achieve an equitable and sustainable future. I am excited to see at COP26 how human-centered environmental policies such as justice, poverty alleviation, food security and gender are placed into the core of the climate commitments going forward.

“While climate action has increased in recent years, world leaders have been failing to keep up with the pressing demands. Urgent and rapid action is needed from world leaders to address the climate crisis, as the negative effects will be felt by the current generation of young people and generations to come. At COP26, I am interested in watching how countries create commitments to cut emissions. However, the important work will be the actions taken after COP26 to address the climate crisis at hand.

Johnson will attend the second week of the two-week conference.

“With ever-increasing globalization, it is imperative that leaders consider the global impacts of their policy decisions. To effectively address climate change—and meet our goals of securing global net zero emissions by 2050—developed countries must lead by example in curtailing global emissions.”

Convertino is attending the first week of the COP26 meeting.

Avik Basu, an environmental psychologist and School for Environment and Sustainability faculty member, is leading the U-M student delegation at the Glasgow summit. The students will observe the negotiations, attend side events and interact with various experts. U-M has sent student delegations to U.N. climate change conferences since 2009, and Basu became involved at the 2015 Paris climate summit.

Basu’s research focuses on the behavioral side of environmental challenges and includes addressing climate adaptation in the developing world through scenario planning. He helped establish a partnership between U-M and the United Nations Framework Convention on Climate Change, which has led to student projects on climate adaptation in the Seychelles, Namibia and Nepal.

“Due to the pandemic-induced postponement of COP26, the countries of the world are behind in their negotiations to decide on how to implement the 2015 Paris Agreement,” he said. “Key negotiations to be carried out at COP26 include increasing climate ambition from each country, determining how carbon markets will work, and financing climate action.

“The University of Michigan students attending COP26 represent the generation who will be impacted by climate change and will have to adapt to it. Their understanding of climate efforts at the international level can help them, in their careers, know which levers they can push to mitigate and adapt to climate change.”