Covering Trump: The Presidency and the Press in Turbulent Times 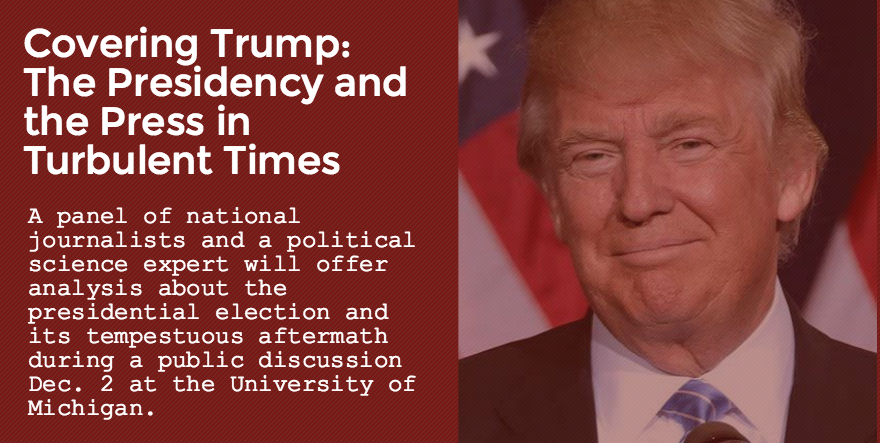 ANN ARBOR—A panel of national journalists and a political science expert will offer analysis about the presidential election and its tempestuous aftermath during a public discussion Dec. 2 at the University of Michigan.

The group will discuss criticism of the media, what journalists, pollsters and political experts missed, what they got right, and the path forward in covering an unprecedented presidency and divided country.

Lynette Clemetson, director of Wallace House at U-M, said it is important to hear from reporters who have covered the presidential election from the beginning.

“It is even more important to turn our attention to what comes next,” Clemetson said. “We are entering uncharted waters. As much as news organizations need to to examine their coverage priorities, news consumers need to become astute in assessing the flood of information coming at them and the role and function of a free press in society.”

The panel includes alumni of the U-M Knight-Wallace Fellowships for Journalists who covered the campaign and will report on the transition, as well as a former Livingston Awards winner and a U-M expert who follows elections and voting behavior.

Wallace House and the College of Literature, Science, and the Arts will present the event, scheduled from 4-5:30 p.m. in B1580 Blau Hall at Ross School of Business.

“Covering Trump: The Presidency and the Press in Turbulent Times” is free and open to the public.

Jon Morgan, an editor in the Washington bureau of Bloomberg News since 2010, will serve as moderator.

Committed to fostering excellence in journalism, Wallace House at the University of Michigan is home to the Knight-Wallace Fellowships and the Livingston Awards, two programs that recognize exceptional journalists for their work, leadership and potential.

The Knight-Wallace Fellowships offer exceptional journalists an opportunity to pursue an academic year of sabbatical studies for professional and personal growth. Experienced, highly motivated professionals from all facets of journalism are invited to apply now at wallacehouse.umich.edu/knight-wallace.