Dark matter scaffolding of universe detected for the first time 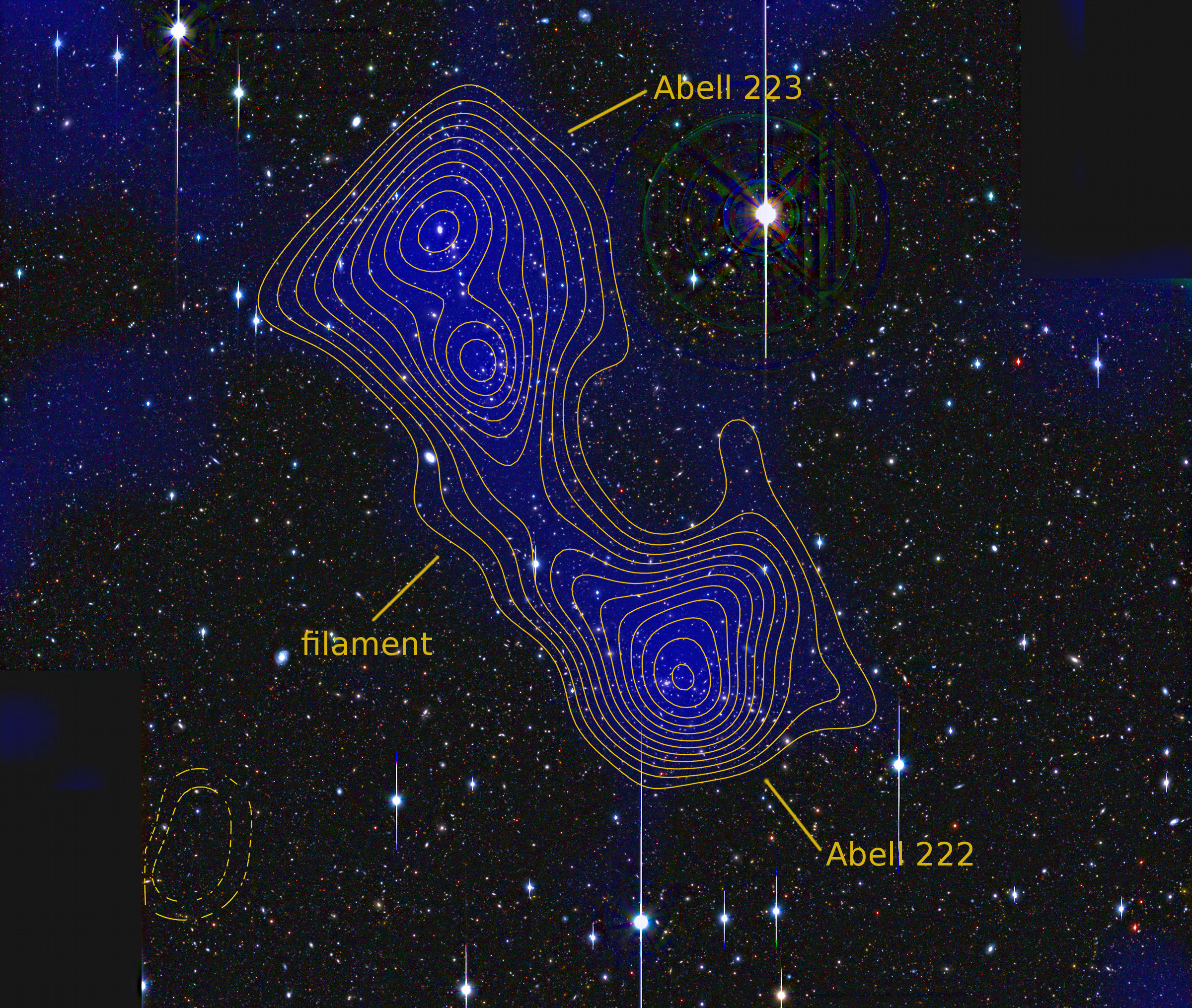 A filament of dark matter has been directly detected between the galaxy clusters Abell 222 and Abell 223. The blue shading and yellow contour lines represent the density of matter. Image credit: Jörg Dietrich, U-M Department of PhysicsANN ARBOR—Scientists have, for the first time, directly detected part of the invisible dark matter skeleton of the universe, where more than half of all matter is believed to reside.

The discovery, led by a University of Michigan physics researcher, confirms a key prediction in the prevailing theory of how the universe’s current web-like structure evolved.

The map of the known universe shows that most galaxies are organized into clusters, but some galaxies are situated along filaments that connect the clusters. Cosmologists have theorized that dark matter undergirds those filaments, which serve as highways of sorts, guiding galaxies toward the gravitational pull of the massive clusters. Dark matter’s contribution had been predicted with computer simulations, and its shape had been roughed out based on the distribution of the galaxies. But no one had directly detected it until now.

“We found the dark matter filaments. For the first time, we can see them,” said Jörg Dietrich, a physics research fellow in the University of Michigan College of Literature, Science and the Arts. Dietrich is first author of a paper on the findings published online in Nature and to appear in the July 12 print edition.

Dark matter, whose composition is still a mystery, doesn’t emit or absorb light, so astronomers can’t see it directly with telescopes. They deduce that it exists based on how its gravity affects visible matter. Scientists estimate that dark matter makes up more than 80 percent of the universe. To “see” the dark matter component of the filament that connects the clusters Abell 222 and 223, Dietrich and his colleagues took advantage of a phenomenon called gravitational lensing.

The gravity of massive objects such as galaxy clusters acts as a lens to bend and distort the light from more distant objects as it passes. Dietrich’s team observed tens of thousands of galaxies beyond the supercluster. They were able to determine the extent to which the supercluster distorted galaxies, and with that information, they could plot the gravitational field and the mass of the Abell 222 and 223 clusters. Seeing this for the first time was “exhilarating,” Dietrich said.

Scientists before Dietrich assumed that the gravitational lensing signal would not be strong enough to give away dark matter’s configuration. But Dietrich and his colleagues focused on a peculiar cluster system whose axis is oriented toward Earth, so that the lensing effects could be magnified.

“This result is a verification that for many years was thought to be impossible,” Dietrich said.

The team also found a spike in X-ray emissions along the filament, due to an excess of hot, ionized ordinary matter being pulled by gravity toward the massive filament, but they estimate that 90 percent or more of the filament’s mass is dark matter.

The researchers used data obtained with the Subaru telescope, operated by the National Astronomical Observatory of Japan. They also used the XMM-Newton satellite for X-ray observations. This work is funded by the National Science Foundation and NASA. Other contributors are from the Kavli Institute for Particle Astrophysics and Cosmology at Stanford University; Ohio University; Max Planck Institut für extraterrestrische Physik in Germany; The University of Edinburgh and the University of Oxford.

The paper is titled “A filament of dark matter between two clusters of galaxies.” Read the text at http://www.nature.com/nature/journal/vaop/ncurrent/full/nature11224.html.