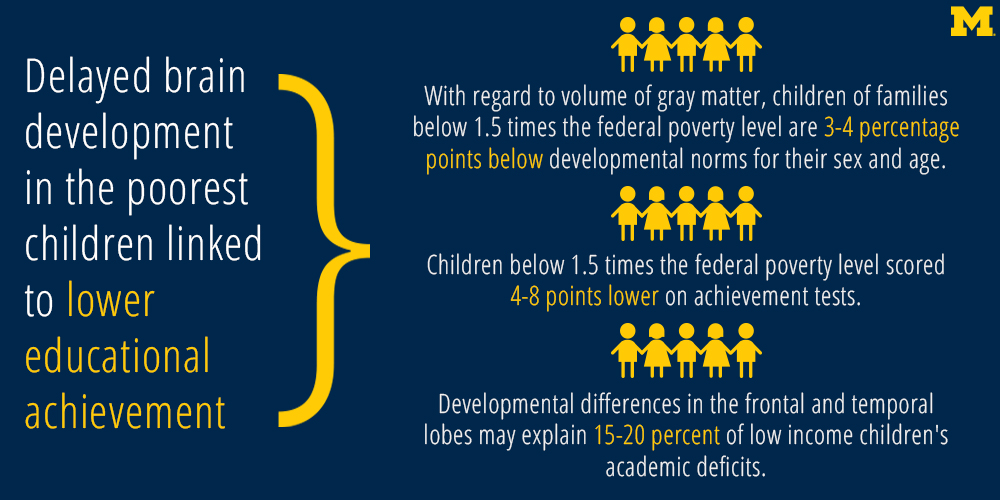 ANN ARBOR—The gap between income and achievement in school has been well documented over the years but new research from the University of Michigan finds physiological differences in the brains of the poorest children.

A researcher from the U-M School of Public Health and colleagues from Duke University and the University of Wisconsin demonstrated that children from low-income households had atypical structural development in several critical areas of the brain, including total gray matter, the frontal lobe, the temporal lobe and the hippocampus.

Past research has made the connection between lower socioeconomic status and achievement, based on lower standardized test scores, grades and educational attainment. It now appears that this income-achievement gap might be explained by differences in the development of low-income children’s brains.

“We find children from low income backgrounds display structural differences in several areas of the brain—areas that have been connected with tasks thought to be critical for achievement in school,” said Nicole Hair, Robert Wood Johnson Scholar in Health Policy Research in the Department of Health Management and Policy at the School of Public Health.

“While we’ve known for a while that children from disadvantaged backgrounds underperform, understanding these mechanisms is really important.”

The researchers examined the brains of 389 children and young adults, ages 4-22, over a six-year period from 2001-07. They analyzed 823 MRI scans, conducting measurements every 24 months for a total of three observations.

Household income was recorded in nine different categories, ranging from less than $5,000 to between $100,000 and $150,000. Neuroimaging and neurobehavioral testing was conducted. More than a quarter of the participants were from families with incomes 200 percent below the federal poverty level.

The areas of the brain they looked at are those that collectively impact scholastic achievement early on and occupational success later. The frontal lobe region is particularly important for the top-down control of attention, inhibition, emotion regulation and complex learning. The temporal lobe is crucial for memory and language comprehension. The hippocampus helps with processing spatial and contextual information and has been tied to long-term memory function.

Key findings from their research:

“Our work suggests that specific brain structures tied to processes critical for learning and educational functioning (e.g., sustained attention, planning and cognitive flexibility) are vulnerable to the environmental circumstances of poverty (such as stress, limited stimulation, and nutrition). If so, it would appear that children’s potential for academic success is being reduced at young ages by these circumstances,” the authors wrote in the paper published in the current issue of JAMA Pediatrics

The good news, Hair said, is the problem could be reversed.

“The brain is malleable,” she said. “We know that it responds to environmental conditions—positively and negatively—and continues to develop into young adulthood. It’s not that these children’s outcomes are predetermined. With intervention, it may be possible to alter this link.”

Other authors include Jamie Hanson of Duke and Barbara Wolfe and Seth Pollak of Wisconsin.