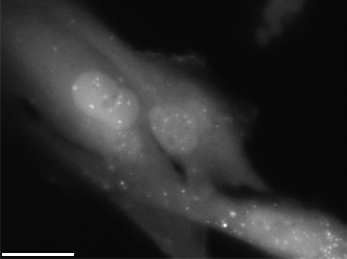 Autophagosomes labeled with a fluorescent marker. Image credit: Wikimedia CommonsANN ARBOR—Researchers at the University of Michigan have discovered a key regulator of autophagy, the cellular recycling process involved in many human diseases. The finding illuminates potential new drug targets for cancer, neurodegeneration and other diseases.

In autophagy, the number and size of the containers used by cells to remove waste, called autophagosomes, determines the efficacy of the recycling process. Investigators in the lab of Daniel Klionsky at the U-M Life Sciences Institute found that a protein called Atg9 regulates the number of the autophagosomes in yeast.

The findings were published online May 29 in the journal Current Biology.

“Increasing or decreasing the size or quantity of autophagosomes is a key goal for therapeutics in a clinical setting, but the field has had little understanding of how size or number is regulated,” Klionsky said. “Controlling Atg9 represents a way that autophagy could be up- or down-regulated to treat disease.”

The Klionsky lab had previously determined that a protein called Atg8 regulates the size of autophagosomes in yeast.

“Together, Atg8 and Atg9 are the critical two proteins to regulate size and number,” Klionsky said. “Targeting both—directly or indirectly—could potentially allow us to regulate autophagy with a new degree of precision.

“We can regulate yeast precisely, so yeast cells are a good model for looking at the mechanisms of autophagy. But Atg9 also exists and works the same way in humans, so this is promising for future treatments for patients.”

Daniel Klionsky is a faculty member at the Life Sciences Institute, where his laboratory is located and all his research is conducted. He is also the Alexander G. Ruthven Professor of Life Sciences in the Department of Molecular, Cellular and Developmental Biology in the College of Literature, Science, and the Arts.

The research was supported by the National Institutes of Health, the National Science Foundation, the Whitehall Foundation and the Fast Forward Medical Innovation program at U-M Medical School.