ANN ARBOR—Physician offices that move to electronic health record systems, but don’t make additional changes in the practice to enhance revenue and cut costs for services no longer needed, stand to lose money, a University of Michigan researcher says.

And a $44,000 federal incentive to encourage conversion to EHRs may not be enough to prevent losses, particularly for small practices.

In an article published in the March issue of Health Affairs, Julia Adler-Milstein, assistant professor at the U-M School of Information and School of Public Health, and colleagues report on a study of 49 community practices in a large EHR pilot program.

They found that the average physician lost $43,743 over five years, and only 27 percent of practices showed a positive return on investment. 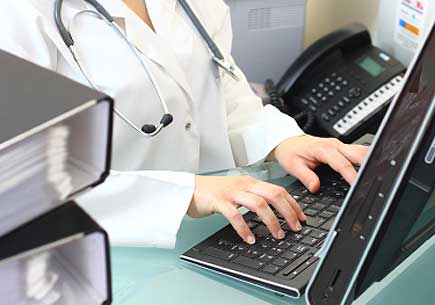 Doctors have expressed reluctance to adopt electronic systems out of concern about the impact on their bottom line, the researchers say.

“What our research shows is that a substantial fraction of physicians who adopt these systems don’t make the additional changes in the practice that they need to recoup the cost of adoption,” Adler-Milstein said.

The largest difference between those that lost money and those with a positive return on investment was whether or not they used the new system to increase revenue, she says. Offices that experienced a positive return saw more patients or improved billing to achieve fewer rejected claims and higher reimbursement from insurance companies.

Adler-Milstein and colleagues from the University of Rochester and Brigham and Women’s Hospital collected survey data from practices participating in the Massachusetts eHealth Collaborative in order to project five-year returns on investment from EHRs.

The collaborative, established in 2004 by the American College of Physicians and the Massachusetts Medical Society, was charged with facilitating adoption of EHRs in three diverse communities and assessing the impact on health care cost and quality.

Widespread EHR adoption is the central goal of the Health Information Technology for Economic and Clinical Health provisions within the 2009 American Recovery and Reinvestment Act. Physicians serving Medicare patients that move to an electronic system are eligible for an incentive of up to $44,000.

Adler-Milstein says incentives were deemed necessary to help address physicians’ concerns that they would bear the cost of implementing EHRs but not reap the benefits from the higher-quality, lower-cost care they enable.

The study found, however, that the incentive only resulted in an additional 14 percent of practices achieving a positive return on investment.

“The incentive helps, but in a very uneven way,” said Adler-Milstein, who explained it would result in the vast majority of large practices achieving a positive return but would do little to help the smaller physician practices.