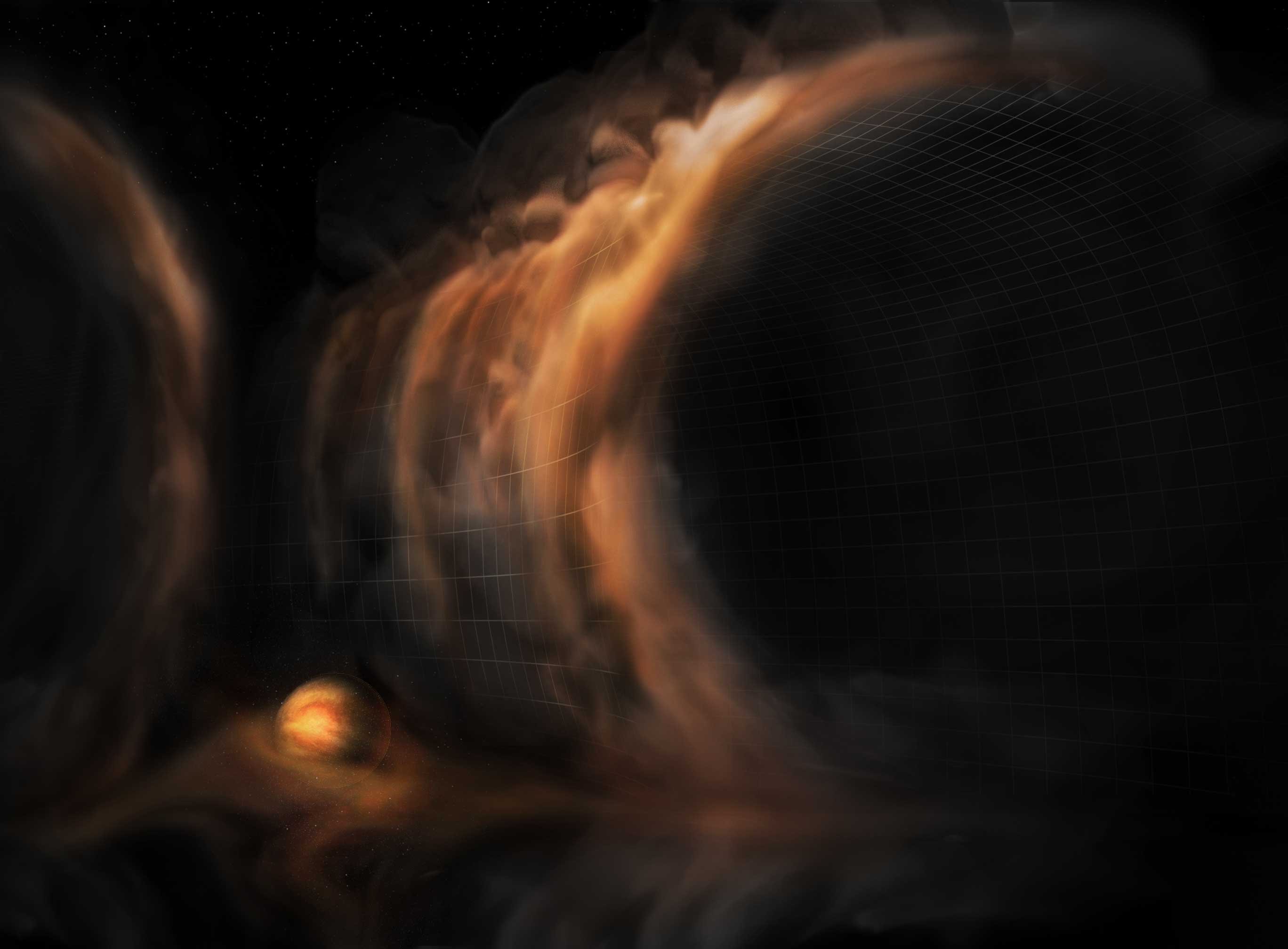 Artist impression of gas flowing like a waterfall into a protoplanetary disk gap, which is most likely caused by an infant planet. Image credit: NRAO/AUI/NSF, S. Dagnello

ANN ARBOR—When planets form, they cut wide swaths through gas and other matter that collect around a newly formed star. Now, a University of Michigan study has found that gas from the upper reaches of the protoplanetary disk flows in to fill these gaps.

This delivers a molecule-rich gas to the atmosphere of the young planet.

A protoplanetary disk—a collection of gas and matter centered around a new star—is composed of about 99% gas and 1% dust. These disks are also thick, with a breadth of about 30% of the disk’s radius. For example, if the disk reaches out 100 astronomical units (the distance of the Earth to the sun) from its center, the disk is also about 30 AUs thick.

The study, published in Nature, follows up on previous work that showed velocity disturbances in the gas of protoplanetary disk HD 163296 were caused by embedded planets.

The astronomers used new observations of the same disc, made at the Atacama Large Millimeter/submillimeter Array, or ALMA. These observations are much higher resolution, meaning that the researchers could get fine-grained detail about how fast gas was rotating in the disk. The researchers then developed a new technique to extract the 3D velocity structure, allowing them to develop a 3D picture of how the gas was behaving in the disk. 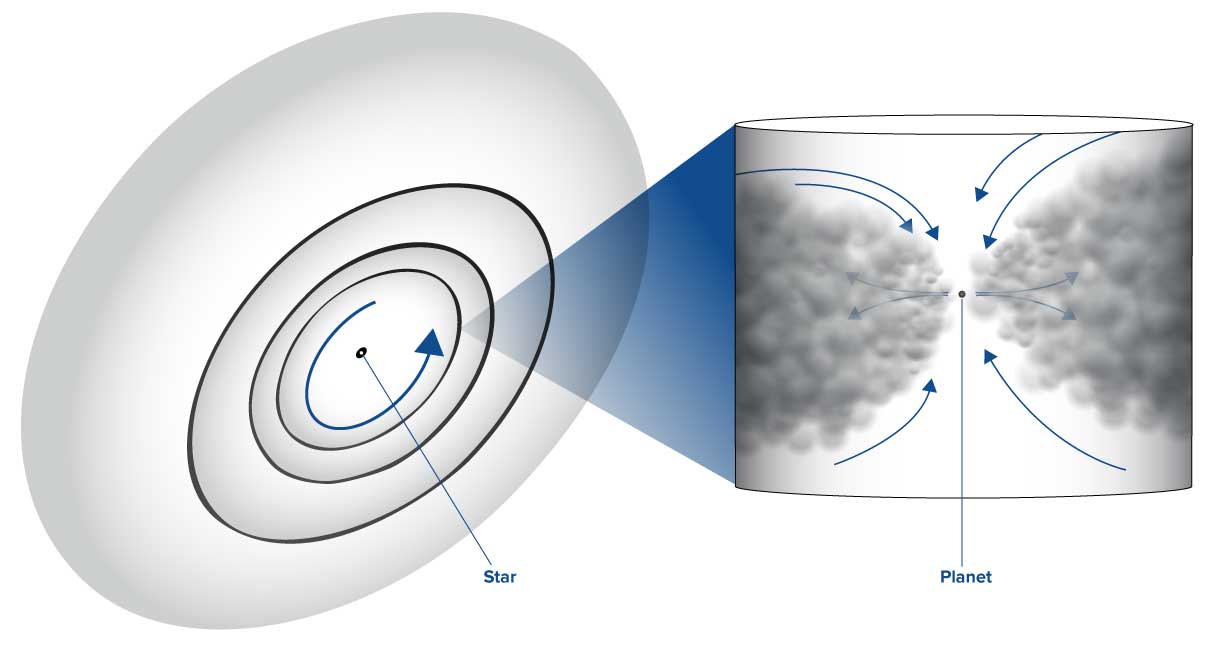 Scientists measured the motion of gas (arrows) in a protoplanetary disk in three directions: rotating around the star, towards or away from the star, and up- or downwards in the disk. The insert shows a close-up of where a planet in orbit around the star pushes the gas and dust aside, opening a gap. Image credit: NRAO/AUI/NSF, B. Saxton

“With the high fidelity data from this program, we were able to measure the gas’s velocity in three directions instead of just one,” said lead author Richard Teague, who was a postdoctoral fellow at U-M when he completed the work, in a news release for the National Radio Astronomy Observatory, which manages ALMA. “For the first time, we measured the motion of the gas rotating around the star, towards or away from the star, and up- or downwards in the disk.”

The research team, which includes Teague, U-M astronomer and department chair Edwin Bergin and Jaehan Bae, a postdoctoral fellow at the Carnegie Institution for Science, found that when newly forming planets cut through the disk, the gas from above the planet’s orbit falls into the gap created by the planet. This creates a waterfall effect in the gas called meridional flows.

Observing this effect confirms several theories about the planet formation process: first, that there’s a circulation of material within the disk. The material cycles from the hot upper atmosphere of the disk toward the cooler midplane of the disk, where planets are forming. 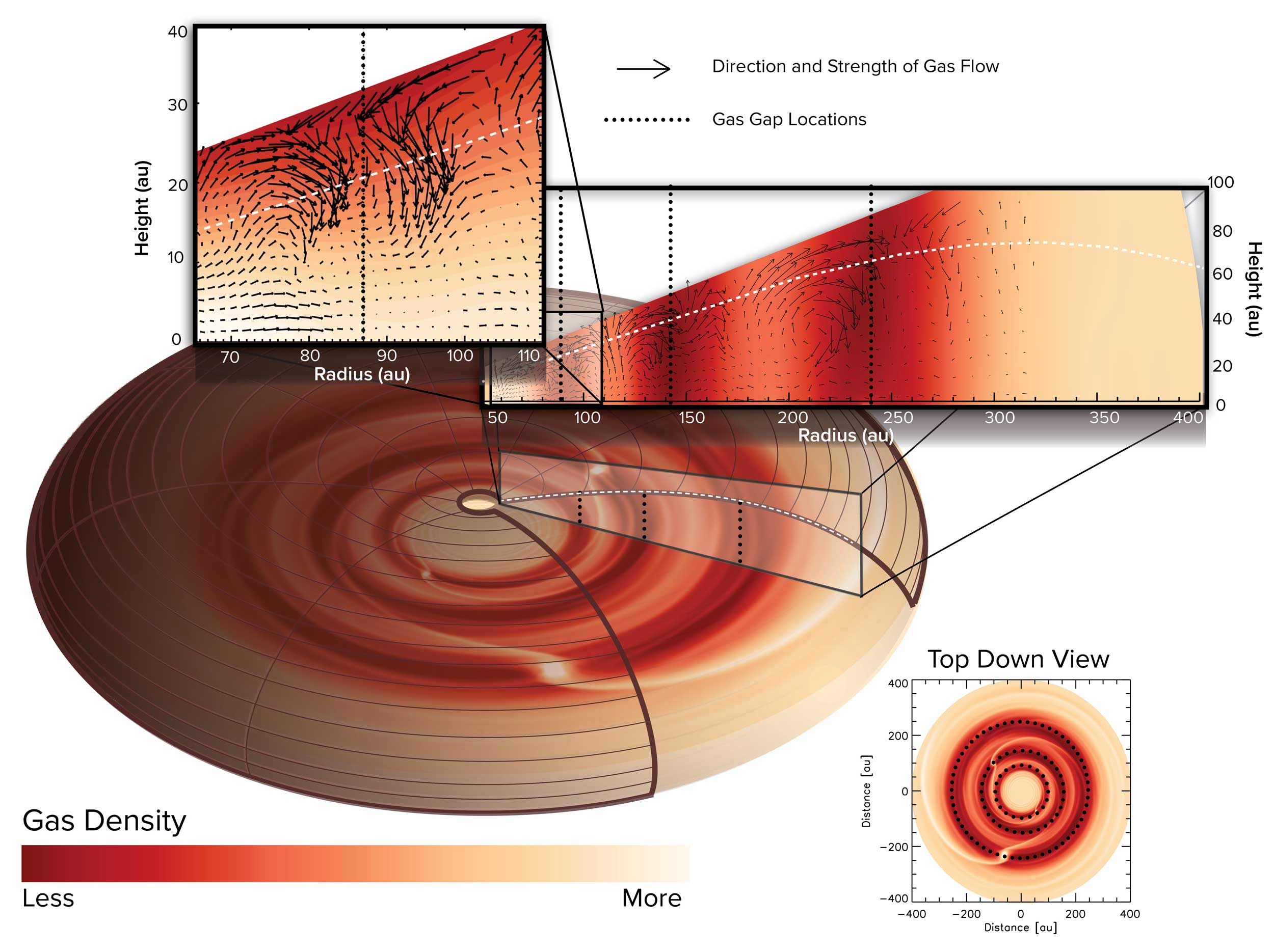 A computer simulation showed that the patterns of gas flows are unique and are most likely caused by planets in three locations in the disk. Planets in orbit around the star push the gas and dust aside, opening gaps. The gas above the gaps collapses into it like a waterfall, causing a rotational flow of gas in the disk. Image credit: ALMA (ESO/NAOJ/NRAO), J. Bae; NRAO/AUI/NSF, S. Dagnello

“It’s important firstly because it’s confirming a prediction. If a planet opens a gap, then we should see gas flowing into the gap,” Teague said. “It’s nice to confirm that these disks are working the way they should.”

Second, it tells astronomers more about how planet atmospheres form, says Teague, who is now a fellow at the Center for Astrophysics at Harvard and Smithsonian. Typically, models of planet formation have looked at the chemical composition of atmospheres as they form in the midplane of the disk. Now, they know gas is falling onto planets from upper layers of the disk.

“This is a very efficient way of transporting molecules into the accretion of the planet, and it also makes a profound difference in the chemical composition in atmospheres of these planets,” Teague said.

In a protoplanetary disk, gas and dust rotate around the disk’s star in a very ordered way, Teague says. When the speed of the gas and dust is interrupted, astronomers infer that gaps in the gas cause changes in the gas’s velocity. By determining how large the gaps are, astronomers can say that planets are what’s both carving gaps in the disk and disrupting the flow of gas.

Teague, Bergin and Bae use a similar concept to map the gas waterfalls. Determining how fast the gas rotates allowed the researchers to understand how gas was moving vertically in the disk.

With this method, astronomers can now study the full dynamic structure of the disk, which will enable them to continue searches for embedded planets in protoplanetary disks. They will also be able to look for signs of other types of motion in these disks, such as searching for disk winds, which has also been elusive, Teague says.

“This gives us a much more complete picture of planet formation than we ever dreamed,” said co-author Bergin in the NRAO release. “By characterizing these flows we can determine how planets like Jupiter are born and characterize their chemical composition at birth. We might be able to use this to trace the birth location of these planets, as they can move during formation.”