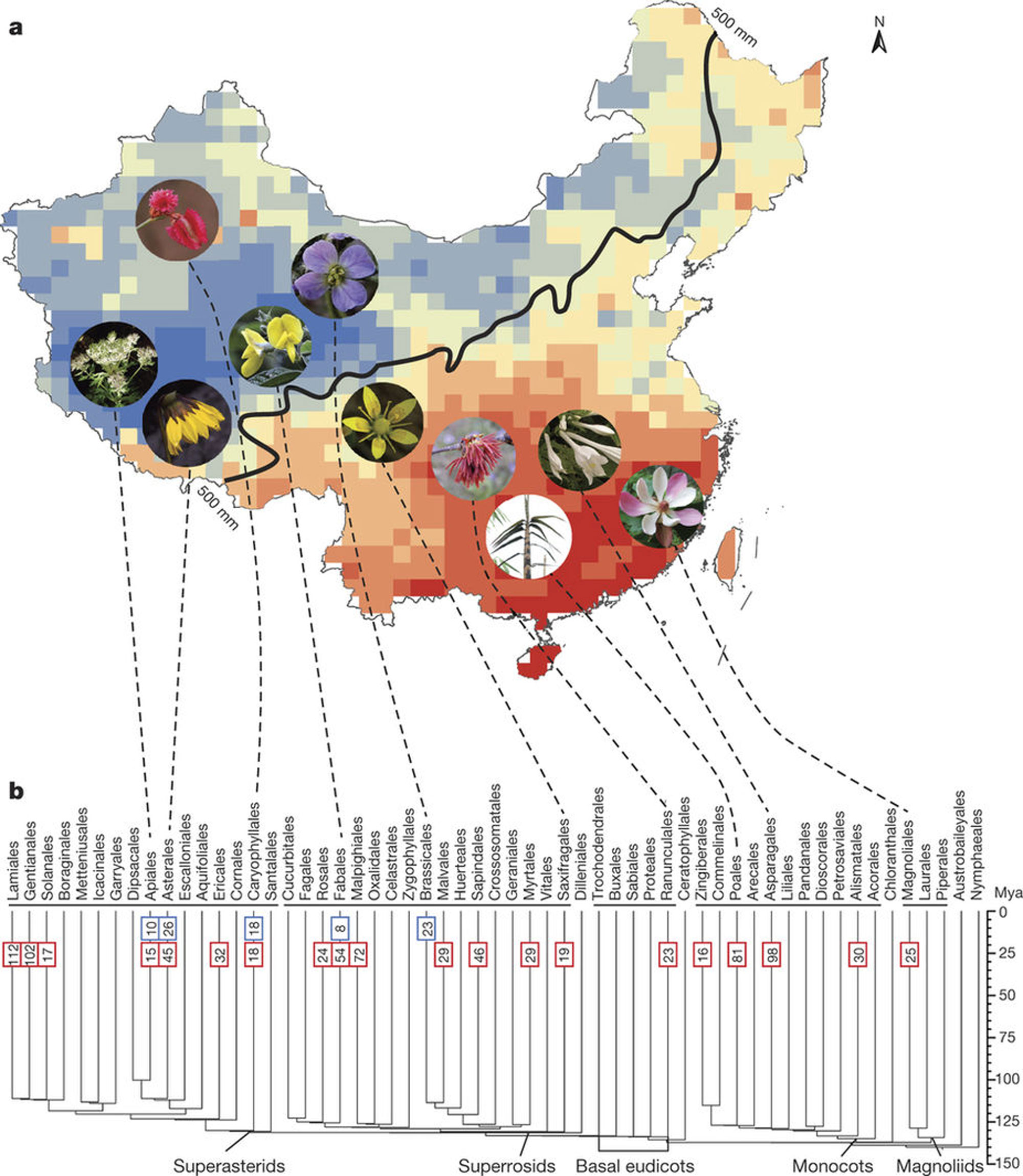 Eastern China is a floral “museum” with a rich array of ancient lineages and distant relatives, while the western provinces are a “cradle” for newer and more closely related species.

The findings highlight the need for more conservation efforts in densely populated eastern China, home to many threatened plant species and the country’s top biodiversity hotspots.

The team published its results today in the online edition of Nature. Co-senior authors are Zhi-Duan Chen of the Chinese Academy of Sciences, Jian-Hua Li of Hope College, and Pam and Doug Soltis of the Florida Museum of Natural History. University of Michigan evolutionary biologist Stephen Smith is a co-author.

Better connecting eastern China’s nature reserves and parks, currently fragmented by urbanization and provincial borders, would help conserve plant lineages and the animals that depend on them, said Pam Soltis, a distinguished professor and curator at the Florida Museum of Natural History.

“Conservation is not just about protecting species numbers but also protecting evolutionary diversity and processes,” said Soltis, who is also the director of the University of Florida Biodiversity Institute.

“Focusing just on how many species are in an area, rather than how different they are from one another genealogically, could lead to conservation practices that miss important sections of the tree of life. Both are key measures of biodiversity. This study helps spotlight what is missing in current protective strategies.”

In a study led by Li-Min Lu of the Chinese Academy of Sciences, researchers produced the first dated phylogeny—a family tree of organisms showing when new species appeared—for all of China’s flowering plant species, or angiosperms, and mapped their distributions using 1.4 million museum records.

Over the past 30 million years, herbaceous plants, those without a woody stem, diversified much more quickly than woody genera such as shrubs, trees and vines.

U-M’s Smith was involved in the project’s phylogenetic analyses and divergence-time estimates.

“This research is another fantastic example of how broad evolutionary studies can provide new insights into fundamental questions,” said Smith, an assistant professor in the Department of Ecology and Evolutionary Biology.

“Researchers often ask whether a geographic area is a ‘cradle,’ where new species evolve, or a ‘museum,’ where species can persist. In this study, we were able to address this question in one of the largest and most diverse regions of the world.

“This could only be done with computational developments that have emerged over the last few years, along with the availability of specimen databases and resources that have recently become available.”

China is home to about 10 percent of the world’s flowering plant species, outstripping the number of angiosperm species in the U.S. by more than 3.5-fold. Its varied geography and climate contribute to its wealth of biodiversity. The hills, lowlands and plains in the warmer, more tropical East gradually rise to the West’s rugged mountains, deserts and the Qinghai-Tibetan Plateau, the highest tableland in the world.

Unlike North America and Europe, China did not undergo the dramatic ecological turnover driven by glaciation in the ice age from about 2.58 million to 11,700 years ago, allowing ancient plant lineages to persist in the East and newer lineages to be folded into ever-diversifying plant communities.

“China didn’t experience that big type of cataclysmic event,” said Doug Soltis, a distinguished professor and curator at the Florida Museum of Natural History and a professor in the University of Florida’s biology department. “That allowed it to be more of a museum than other parts of the Northern Hemisphere.”

The uplift of the Qinghai-Tibetan Plateau in the West, caused by India’s collision with Eurasia, spurred the region’s evolutionary explosion of new species by opening up myriad new habitats and creating a cool, arid western climate. The West became a cradle for newer herbaceous plants while the East remained a museum for older herbaceous plants and both a museum and a cradle for woody plants.

The researchers used species-distribution data to map China’s areas of genetic richness, pinpointing several eastern provinces as home to the country’s greatest genetic diversity of flowering plants: Guangdong, Guanxi, Guizhou, Hainan and Yunnan. Conservation in the East, however, is carried out on a much smaller, more fragmented scale than in the sparsely populated West, where large swaths of land are preserved.

The researchers pointed to the value of museum collections in enabling this country-scale study of thousands of plant species spanning millions of years of evolution. Each plant specimen, painstakingly collected and preserved in herbaria over the past century and digitized, contributed to an enormous dataset that offered a detailed snapshot of China’s diversity of flowering plants.

“While this study addresses some fundamental questions, it is only the beginning, as we can now apply these methods across the globe and throughout the tree of life,” U-M’s Smith said. “We look forward to exciting times in evolutionary biology and biogeography.”