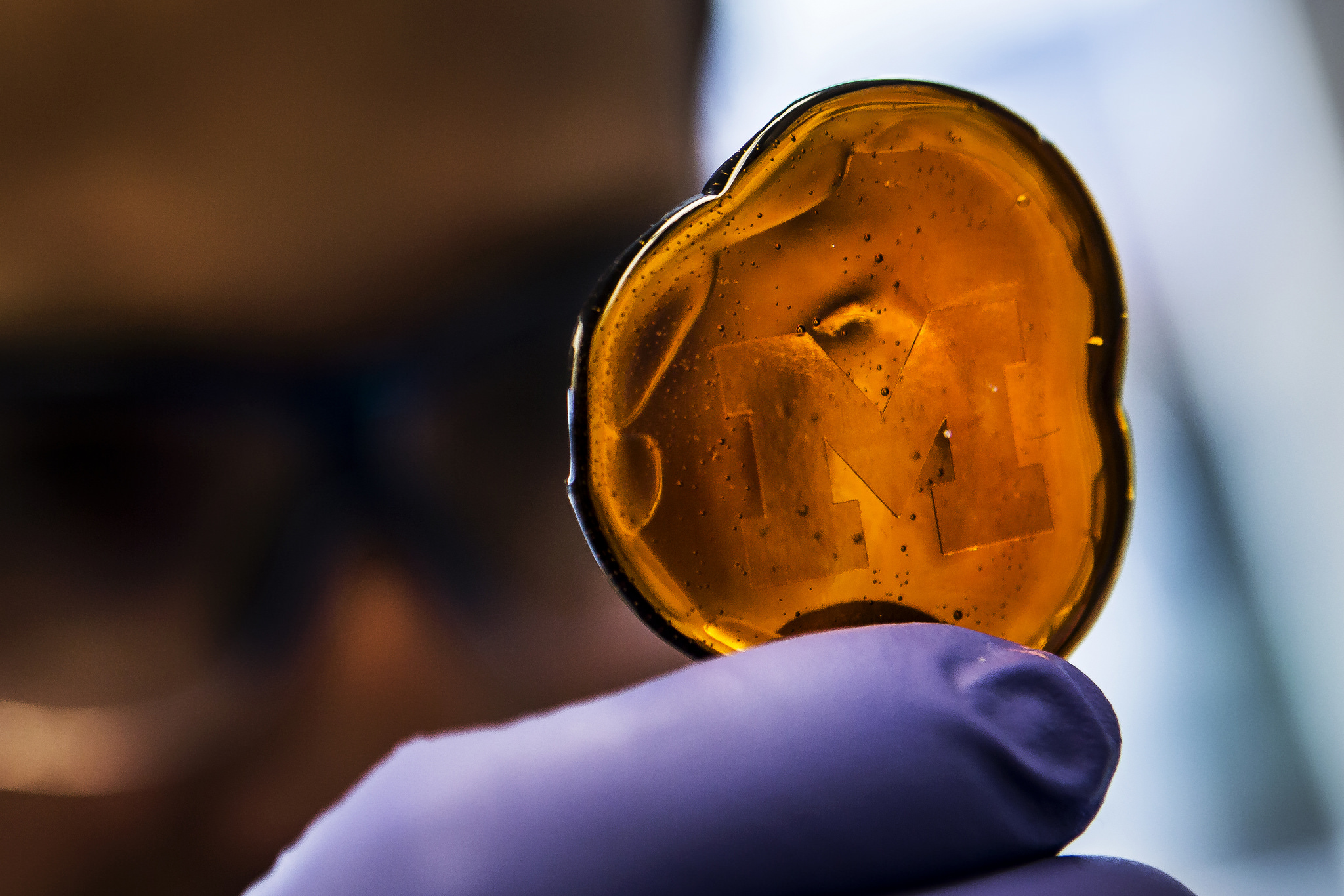 Labuz is part of BME Professor Shu Takayama’s research team that studies the behavior of soft cells like those in lungs and livers. To do that, Takayama’s group requires soft silicone structures that are less than a millimeter wide and subsequently difficult to construct without breakage. The candy molds that were created enables for the creation of these pillars. Image credit: Joseph Xu, Michigan EngineeringANN ARBOR—Anyone who has made Jello knows how difficult it can be to spring the wobbly treat from its mold intact. Now, imagine trying to dislodge something 10 times softer than gelatin, while keeping every detail unscathed down to a microscopic level.

That was the problem faced by University of Michigan postdoctoral researcher Chris Moraes.

Moraes’ team, led by biomedical engineering professor Shu Takayama, was studying how scar tissue forms inside the body, specifically in the soft-celled lungs and liver. To do that, they were working with a type of silicone called Sylgard 527. It’s so soft that just a few cells can squeeze it out of shape.

“Soft silicone structures are useful for studying human cells outside the body,” Takayama said. “We can use them to measure the very small squeezing effect that cells generate during wound healing. This enables us to test the effects of drugs using very small samples of human cells, instead of testing on actual patients.”

Moraes wanted to mold the Sylgard into tiny pillars less than a millimeter wide, then position the cells around them in a donut shape. He could then apply different treatments to the cells and measure how much their expansion and contraction squeezed the pillars out of shape.

Molding those pillars, however, turned out not to be so simple. The team was using hard epoxy molds, and there was no way to remove the silicone pillars without turning them into useless lumps of goo.

The solution came when Moraes was at home in his kitchen. An avid cook, he was trying a new recipe for homemade cotton candy.

“The cotton candy was a total failure,” he said. “I ended up with nothing but a huge blob of sugar syrup. I gave up and left it to cool in the pan.”

But when he took the hardened mass out of the pan, he noticed something surprising: The sugar retained every detail of the pan it came out of. It got him thinking—why not use hardened sugar as a mold for super-soft silicone? They could pour in the silicone, wait for it to cure, then dissolve the mold in water, leaving perfectly cast pillars of soft silicone.

The next day, Moraes was in the lab, perfecting a recipe for sacrificial sugar molds. The recipe was simple: sugar, water and corn syrup, cooked in the microwave to just the right consistency.

“It smelled great,” said biomedical engineering doctoral student Joe Labuz, who also works on the project. “The trick is to caramelize the sugar, hardening it enough so that it doesn’t deform as the silicone cures. Eventually, we got it just right and also drew a crowd of our colleagues who wondered where the great smell was coming from.”

The pillar-making process begins with a hard epoxy “negative mold”—a mirror image of the sugar mold used to cast the final pillars. The researchers pour in hard silicone to create an initial plastic mold. Next, the molten sugar mixture is poured into this initial plastic mold and left to cool, hardening into what looks a lot like a piece of hard candy.

The hardened sugar is popped out of the initial plastic mold and the sugar is then used as a mold for the silicone. The researchers pour the silicone into the sugar mold and cure the concoction in an oven. Finally, the silicone and sugar mold are put into a water bath. The sugar dissolves, while the water-repellent silicone stays intact.

The team is using the new process to better understand how scar tissue forms inside the body. Internal scarring is a common occurrence in diseases like cancer and diabetes, where the body tries to repair organ damage done by the disease. The formation of scar tissue can cause further problems by preventing organs from working properly.

“Scarring happens when the body’s healing process goes too far,” Takayama said. “If we can prevent it from happening or even reverse it, we could reduce the impact of a lot of diseases and create better outcomes for patients.”

The candy molding process is detailed in a study, “Supersoft lithography: candy-based fabrication of soft silicone microstructures,” published in the journal Lab on a Chip. The work was supported by the National Science Foundation, National Institute of Health (grant numbers CA 170198 and AI116482) and the Natural Sciences and Engineering Research Council of Canada.