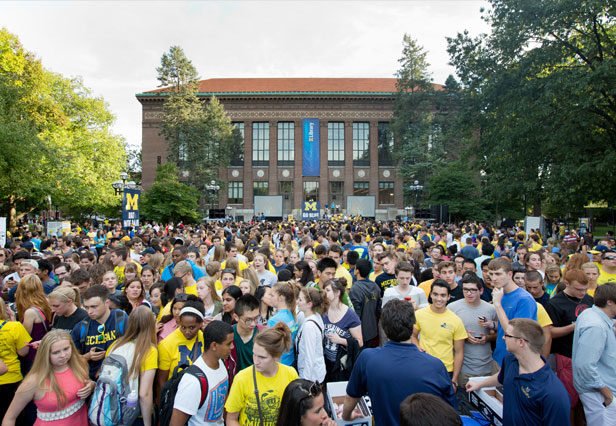 Image of students on the Central Campus Diag.

ANN ARBOR—Nearly 26 percent of in-state undergraduates at the University of Michigan pay no tuition this fall due to university financial aid, including nearly 1,700 students under the landmark Go Blue Guarantee.

The guarantee, which went into effect with enrolled students in January, includes a promise of free tuition for in-state students whose families earn less than $65,000 and have assets totaling less than $50,000.

U-M also saw a 24-percent increase in admissions applications from some of the state’s lowest-income students in the first year since implementing the guarantee, contributing to a nearly 6-percent increase in freshman enrollment from those with incomes of $65,000 or less.

“Through the Go Blue Guarantee and commitment to financial aid, we are sending a message to the people of our state and beyond that we seek to welcome students from all communities and backgrounds who have the talent and desire to be Michigan Wolverines,” President Mark Schlissel said.

The university garnered national attention last year when leaders announced the Go Blue Guarantee as a new initiative to remove some of the confusion around financial aid and signal to students from lower-income backgrounds that U-M was a viable option.

“The long-range goal is to motivate and challenge students, especially those who see their family income as a barrier to higher education because they now know that a University of Michigan education is within their reach,” said Kedra Ishop, vice provost for enrollment management.

An analysis done by Bridge Magazine in June found U-M to have the lowest net tuition cost among the state’s 15 public universities for students with an annual family income up to $75,000.

Additionally, the percentage of all undergraduates receiving Pell grants, a common marker of socioeconomic diversity, rose to 17.9 percent, up from 16.5 percent in 2014.

The Ann Arbor campus once again received a record number of applicants for the fall 2018 freshman class, up more than 8 percent from the previous year. From an all-time high of 64,917 applications, U-M offered admission to 14,818 freshmen. Of those offered admission, 6,695 enrolled, making for a freshman class that was on target but slightly smaller than the previous year.

Among in-state students, 40.5 percent of the 12,177 students who applied were offered admission and 3,554 in-state freshmen enrolled for a yield of 72 percent. That compares with an admit rate of 18.8 percent of 52,740 out-of-state domestic and international students who were offered admission. Among those, 3,141 enrolled for a yield of 31.8 percent.

“We’re continually amazed and humbled by the level of interest in the University of Michigan, here in the state, across the country and internationally,” said Erica Sanders, director of undergraduate admissions. “As has been the case for many, many years, we received applications from far greater numbers of qualified students than our campus is able to accommodate.

“We rely on our holistic review process to select students who not only have the academic record to succeed at U-M but also a strong interest in our university and connection with our institutional mission and goals.”

In addition to the progress seen in socioeconomic diversity, undergraduate enrollment (PDF) continues to show improvement among underrepresented minorities and first-generation students.

Of the 6,403 new freshmen who are U.S. citizens or permanent residents, 949 are underrepresented minorities who make up 14.8 percent of new freshmen, an increase from 13.9 percent last year and 10 percent in 2014.

“We’re making progress in some areas and face challenges in others. We have to continue to find legal solutions to provide the opportunity of a Michigan education to a diverse set of students,” Ishop said. “We’re not there yet.”

Additionally, students who are the first generation in their family to attend a four-year college or university make up 14 percent of the new freshman class, up from 11.3 percent in 2014.

Transfer-student enrollment went up this year by 14.6 percent to 1,246 students with 159 more students transferring to the Ann Arbor campus than in fall 2017. This year’s transfer students included more underrepresented minorities among U.S. citizens and permanent residents (16.6 percent) than five years ago.