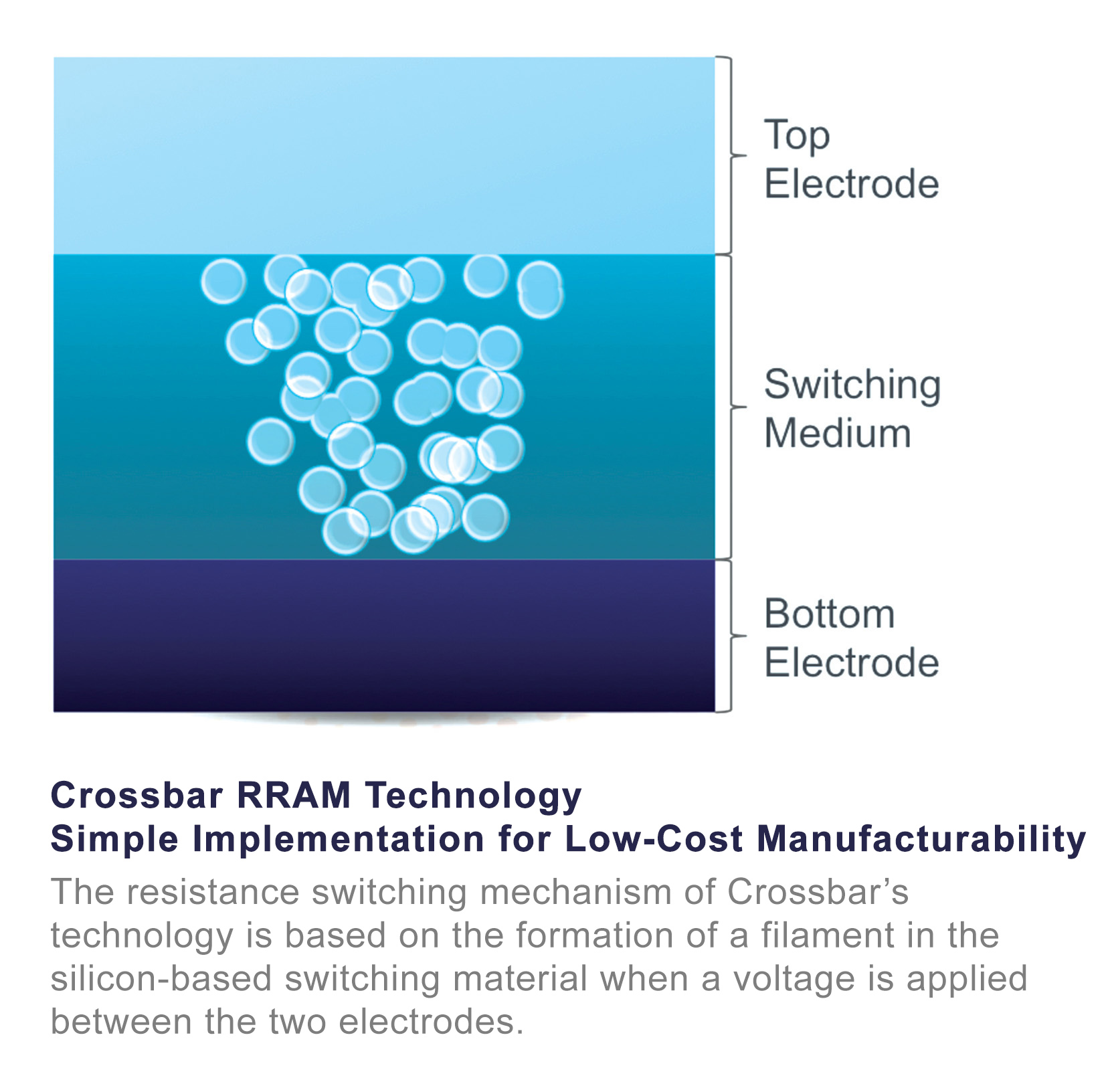 Crossbar RRAMTechnology – Simple Implementation for Low-Cost ManufacturabilityANN ARBOR—The next generation of smartphones could be capable of storing 250 hours of HD video and carrying a charge for a week, thanks to an advanced data storage technology from a University of Michigan startup that could upend the memory market.

Crossbar Inc., which licensed the technology from U-M in 2010, recently announced it has developed a working “resistive random access memory,” or RRAM, prototype in a commercial fabrication facility. That’s a major step toward bringing the technology to market.

Smartphones are just one place it could be used. RRAM is a new form of nonvolatile memory that has the potential to replace the flash memory commonly used in tablets, digital cameras and solid-state drives, in addition to mobile phones. Nonvolatile memory stores information even when it’s powered down.

Crossbar’s RRAM promises up to 1 terabyte of storage on a chip that performs 20 times faster with 20 times less power and 10 times the endurance of today’s best-in-class flash, according to a company statement. That means it could hold roughly 12 times more HD video than today’s comparable flash memory, which maxes out before 20 hours. It could store 250,000 songs, compared with today’s 16,000.

Crossbar was formed with the help of venture capital firm Kleiner Perkins Caufield and Byers, which led the initial round of funding—their first investment in a U-M startup.

“We continue to be excited about the disruptive potential of Crossbar,” said John Denniston, KPCB partner. “The company has made excellent progress since our initial investment and is now poised to bring a much-needed solution to the memory markets.

“It’s been a privilege to support professor Wei Lu and his team in developing this ground-breaking innovation. And we’ve been very pleased with the collaboration with University of Michigan—and in particular the Technology Transfer team—all along the way.”

Headquartered in Santa Clara, Calif., the company has now raised a total of $25 million, according to a Wall Street Journal report.

“Crossbar’s technology can offer higher memory densities and faster speeds at lower prices. I expect it to be available in the embedded memory market first followed by introductions in the consumer and enterprise IT markets,” said Wei Lu, the associate professor of electrical engineering and computer science from whom Crossbar licensed the technology. Lu is also chief scientists at Crossbar.

“With our working Crossbar array, we have achieved all the major technical milestones that prove our RRAM technology is easy to manufacture and ready for commercialization,” said Crossbar CEO George Minassian. “It’s a watershed moment for the nonvolatile memory industry.”

Crossbar was the first U-M startup to receive a direct investment from the university through its unique Michigan Investment in New Technology Startups program. MINTS, launched in 2011, will inject up to $25 million during the next decade into select venture-funded U-M startups. Once a startup has secured an initial round of funding from a qualifying independent venture capital firm, it is eligible for up to $500,000 of university financing per investment round. So far, seven U-M startups have received funding.

U-M Tech Transfer has earned a reputation for helping to create impressive startups based on U-M technology. Using entrepreneurial talent, internal funding and connections to venture partners, it launches a new startup company every five weeks. U-M startups have raised more than $1 billion in venture funding over the past 10 years, including Arbor Networks, HandyLab, HealthMedia, Ablation Frontiers, Accuri and OncoMed Pharmaceuticals.

One of U-M’s top priorities is to help spur economic development through a rich variety of programs in entrepreneurship, tech transfer, venture creation, business engagement, research, and education. Learn more at innovationeconomy.umich.edu