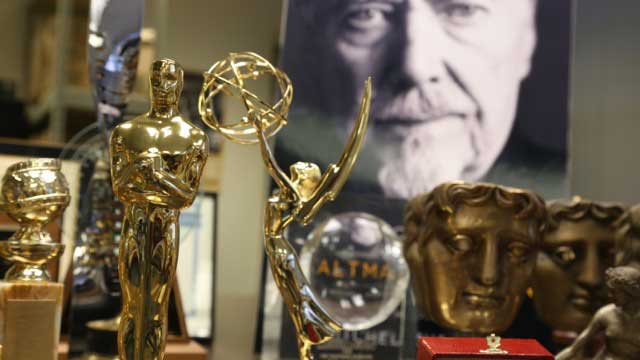 Totalling more than 130 plaques, statues and framed certificates, they will be added to the Robert Altman archive within U-M’s popular Screen Arts Mavericks & Makers Collection that highlights visionaries within the genre of independent film (others include Orson Welles, John Sayles, Nancy Savoca, Ira Deutchman and Alan Rudolph).

Included is his 2001 Golden Globe for best director (“Gosford Park”), a 1989 Primetime Emmy for outstanding directing in a drama series (“Tanner ’88”) and a 2006 Academy Honorary Award. Altman is also one of the few filmmakers whose films have won awards at all of the major international film festivals, including the Golden Bear at Berlin, the Golden Lion at Venice and the Golden Palm at Cannes, all of which can be found in the archive as well.

According to Phil Hallman, curator of the Screen Arts Mavericks & Makers Collection, the awards will be added to the massive trove of materials spanning Altman’s full career as a television and film producer-director as well as opera director.

“This collection of Altman’s achievements really shows how influential he was, not only in Hollywood, but worldwide,” said Hallman, who hopes to display some of them on campus in the near future. “We’re honored to continue his legacy in this way, by preserving these awards here at the University of Michigan.”

Altman’s archive at U-M is one of its largest, comprising more than 700 boxes of photographs, working drafts of his scripts, business correspondence, set design blueprints, props, film equipment and more.

Best known for films like “Nashville,” “MASH” and “McCabe & Mr. Miller,” Altman is consistently lauded as one of the greatest filmmakers in American cinema.

The U-M Library acquired the Robert Altman archive in 2008, two years after Altman passed away in November 2006 at the age of 81. His wife, Kathryn, passed away in March 2016.