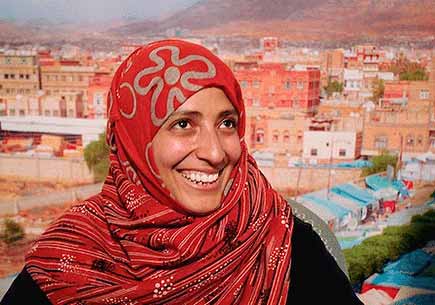 The 32-year-old mother of three was virtually unknown outside of Yemen before she began leading anti-government protests this year in the impoverished nation on the southern tip of the Arabian Peninsula. But among Yeminis, the outspoken Karman is known as “the iron woman” and the “mother of revolution.”

Her brief arrest in January helped ignite protests by hundreds of thousands demanding that President Ali Abdullah Saleh’s authoritarian regime be toppled and replaced by a democratic government. After holding her for a day, the authorities released Karman and she immediately went back to leading demonstrations.

“We are proud to host Tawakkul Karman, a courageous leader in the movement for peace and democracy that has already accomplished so much for Yemen and the entire region,” said Michael Bonner, chair of the Department of Near Eastern Studies and interim director of the Arabic Flagship Program. “She will enrich the cultural experience that we strive to offer our students, and she will bring a precious message to the large Middle Eastern community of Southeastern Michigan.”

Karman will be the second Nobel Peace laureate to speak at U-M in the past month. Burmese dissident Aung San Suu Kyi, awarded the Nobel in 1991, spoke to students via video on Oct. 25 when she received the Wallenberg Medal.

Karman’s free lecture on Nov. 14 will begin at 4 p.m. in Rackham Auditorium, 915 East Washington St., Ann Arbor. Bags and purses are not permitted in the auditorium and may be checked in at the entrance.

She has been invited through U-M’s Arabic Flagship Program, an intensive language program that immerses selected undergraduate students in Arabic language and culture. The program is part of the Department of Near Eastern Studies in the College of Literature, Science, and the Arts.

Other hosting units are the Center for Middle Eastern and North African Studies, International Institute, Islamic Studies Program, Middle East and South Asia Gender Studies Initiative in the Institute for Research on Women and Gender; Vice Provost for International Affairs and the Weiser Center for Europe and Eurasia. For more on Near Eastern Studies: http://lsa.umich.edu/neareast/