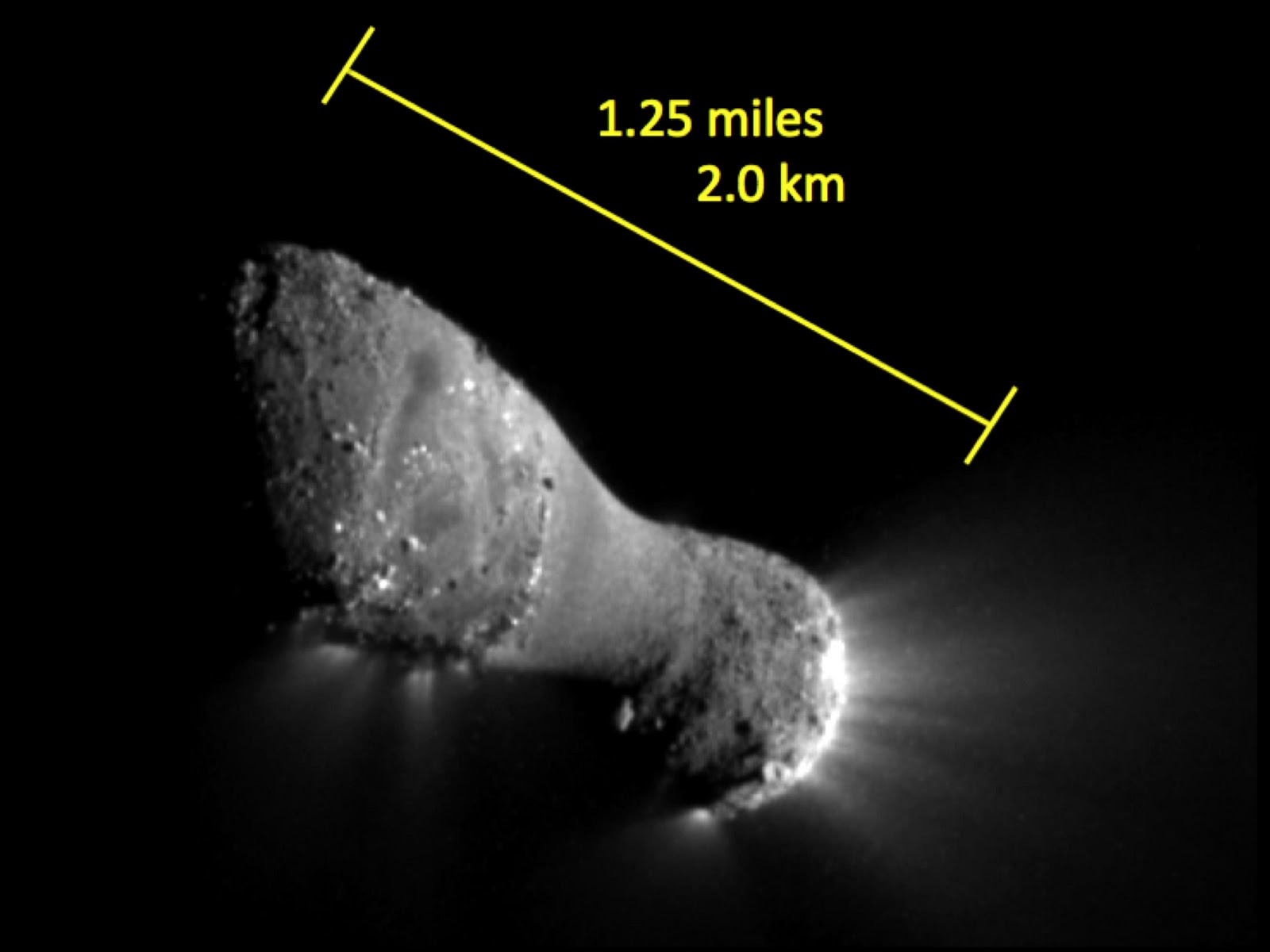 Comet Hartley, as imaged by NASA’s EPOXI spacecraft. Credit: NASA ANN ARBOR—New evidence supports the theory that comets delivered a significant portion of Earth’s oceans, which scientists believe formed about 8 million years after the planet itself.

The findings, which involve a University of Michigan astronomer, are published Oct. 5 online in Nature.

“Life would not exist on Earth without liquid water, and so the questions of how and when the oceans got here is a fundamental one,” said U-M astronomy professor Ted Bergin, “It’s a big puzzle and these new findings are an important piece.”

Bergin is a co-investigator on HiFi, the Heterodyne Instrument for the Infrared on the Hershel Space Observatory. With measurements from HiFi, the researchers found that the ice on a comet called Hartley 2 has the same chemical composition as our oceans. Both have similar D/H ratios. The D/H ratio is the proportion of deuterium, or heavy hydrogen, in the water. A deuterium atom is a hydrogen with an extra neutron in its nucleus.

This was the first time ocean-like water was detected in a comet.

“We were all surprised,” Bergin said. 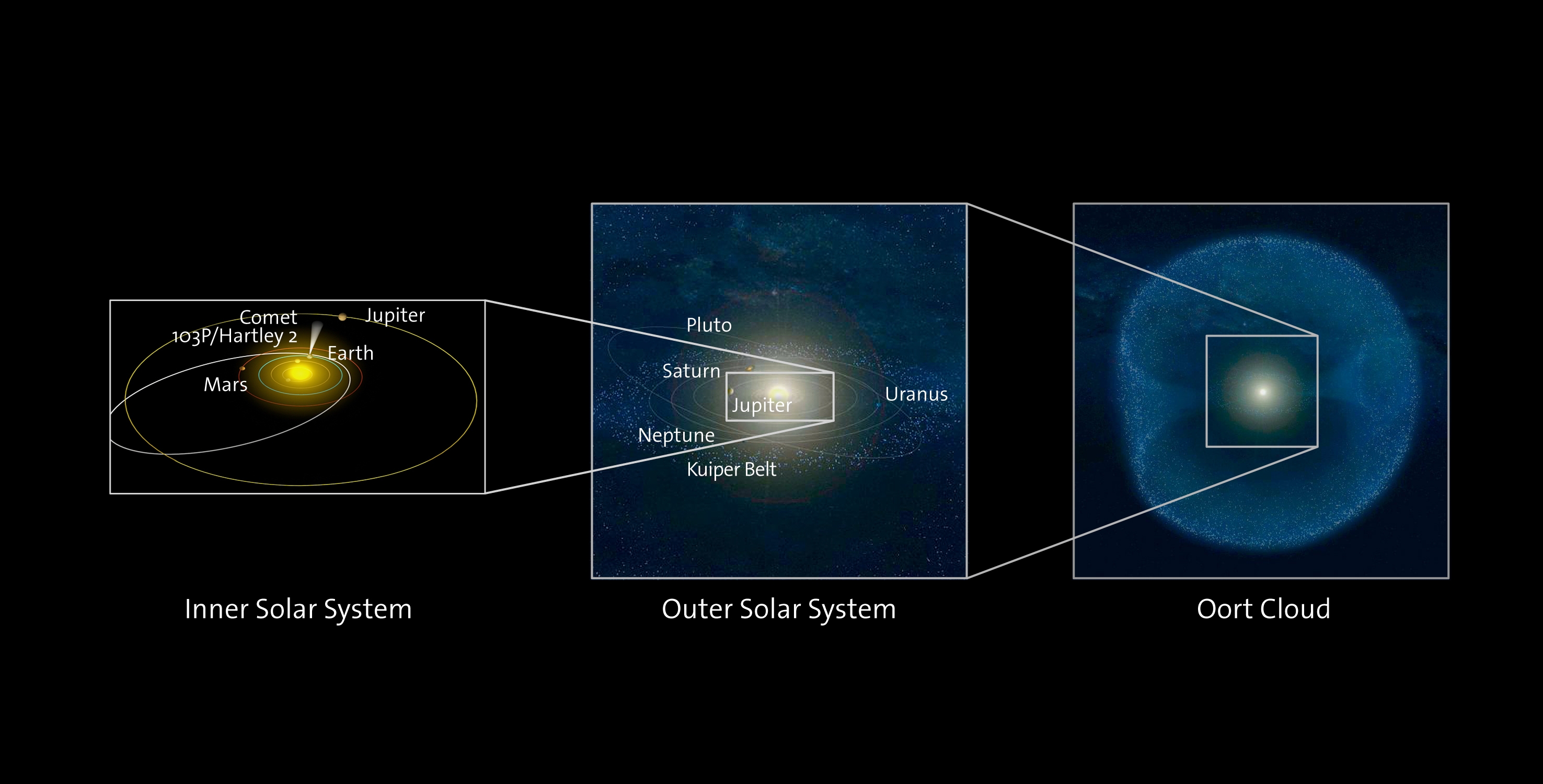 This illustration shows the locations of various classes of comets in the Solar System, relative to the orbits of the planets. The left panel shows the inner Solar System along with the orbit of Jupiter-Family comet Hartley 2. The central panel shows a larger portion of the Solar System beyond the orbit of Jupiter, as well as the Kuiper Belt, one of the two main reservoirs of comets in the solar system. The right panel shows the Oort Cloud, the other main reservoir of comets located well beyond the outer solar system. Credit: ESA/AOES MedialabSix other comets HiFi measured in recent years had a much different D/H ratio than our oceans, meaning similar comets could not have been responsible for more than 10 percent of Earth’s water.

The astronomers hypothesize that Hartley 2 was born in a different part of the solar system than the other six. Hartley most likely formed in the Kuiper belt, which starts near Pluto at about 30 times farther from the sun than the Earth is. The other six hail from the Oort Cloud more than 5,000 times farther out.

The source of earth’s oceans has been a subject for debate among astronomers for decades. Until now, asteroids were thought to have provided most of the water. Now, however, Herschel has shown that at least one comet does have ocean-like water.

“The results show that the amount of material out there that could have contributed to Earth’s oceans is perhaps larger than we thought,” Bergin said.

Herschel, a European Space Agency mission with NASA participation, is an orbiting telescope that allows astronomers to observe at the far-infrared wavelengths where organic molecules and water emit their chemical signatures.

The paper is called “Ocean-like water in the Jupiter-family comet 103P/Hartley 2.”