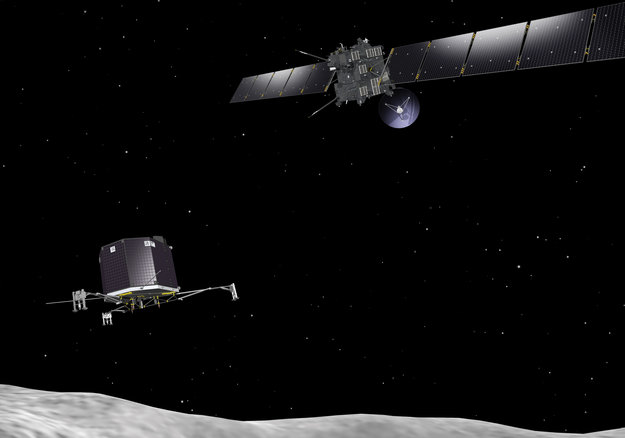 Artist’s impression of the Rosetta orbiter deploying the Philae lander to comet 67P/Churyumov–Gerasimenko. Image credit: European Space AgencyANN ARBOR—Earth’s oceans may not have come mostly from comets smashing into the planet and melting billions of years ago. That’s according to the Rosetta mission’s first results, which poke holes in the prevailing theory of how we got our water.

An instrument designed and built, in part, at the University of Michigan took the measurements that led to the findings.

The source of Earth’s water is a much-debated question in space science. Liquid water on planets is rare.

Comets that orbit the sun near Jupiter were thought to have delivered most of it on Earth about 4 billion years ago, with asteroids also contributing. What implicated the comets were measurements showing that several from the Jupiter neighborhood contained Earth-like ratios of two different varieties of water—the conventional kind and a slightly heavier version.

“Because this ratio has only been determined in a handful of comets, the results may indicate that there is a wider distribution in comets and that Earth’s oceans might not have derived most of their water from comets,” said Michael Combi, the Freeman Devold Miller Collegiate Research Professor in the U-M Department of Atmospheric, Oceanic and Space Sciences. Combi is a co-author of a paper on the findings in this week’s Science Express.

The ratio the researchers study is the proportion of water molecules that contain a more massive isotope of hydrogen. Isotopes are versions of elements with extra neutrons. Though all H2O molecules contain two hydrogen atoms and one oxygen, sometimes one or both of the hydrogens hold an extra neutron. The ratio provides scientists a useful tracer when they study water throughout the universe. The water on Earth, though, is special.

“None of the other planets in our solar system are covered with water, so it would be nice to understand why we have a place that is so conducive to life, that is, with a lot of liquid water on the surface,” Combi said. “We would like to know where the water came from.”
The Rosetta spacecraft entered orbit around 67P in August. In November, its Philae lander touched down, becoming the first craft to land on a comet. These new results come from the orbiter—specifically an instrument called the Double Focusing Mass Spectrometer.

The spectrometer analyzes the gas and plasma around the comet. It draws in samples and identifies what molecules are present based on their atomic masses. It specializes in measuring the ratios of different isotopes of elements.

“It is arguably the highest resolution instrument of its type to have ever flown in space. It can distinguish between different molecules that have nearly the same mass,” said Bruce Block, lead engineer in research at the U-M Space Physics Research Lab who worked on designing and building the mass spectrometer.

Rosetta is a European Space Agency mission, with NASA contributions. The paper is titled “67P/Churyumov-Gerasimenko, a Jupiter Family Comet with a high D/H ratio.”