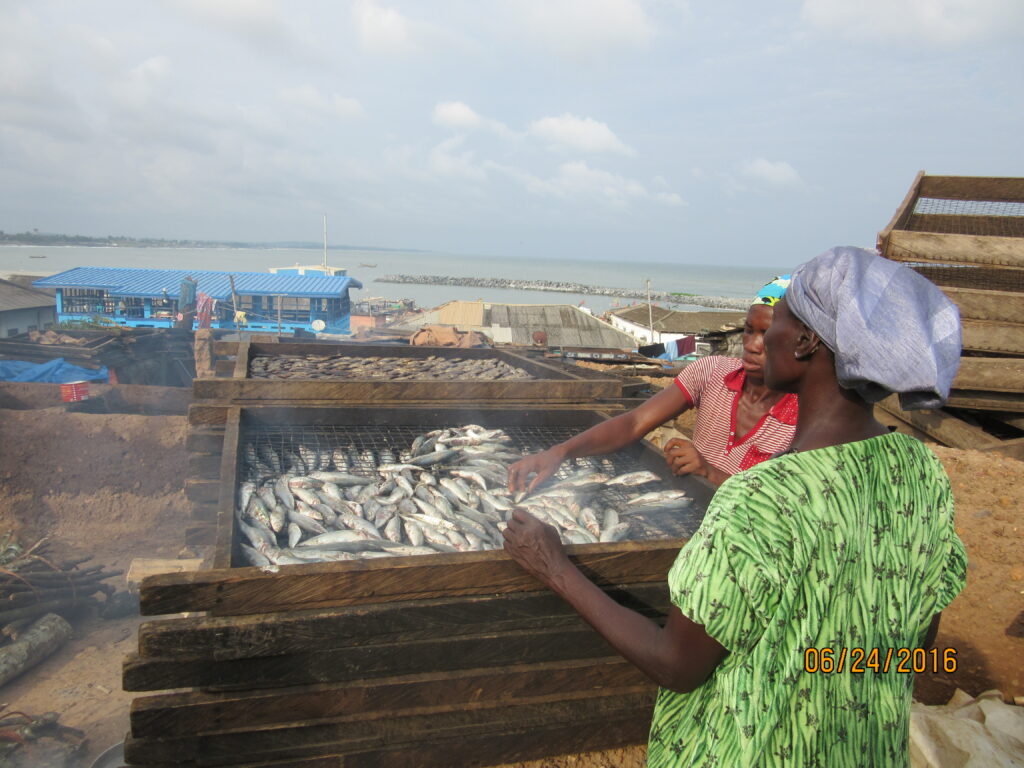 Fish being smoked in the coastal Ghanaian city of Elmina. The fish are loaded onto wood-framed metal screens that are then stacked atop rudimentary, wood-fired mud ovens. Image credit Pam Jagger

Millions of workers in coastal Africa—most of them women—spend their days preserving fish by smoking them in rudimentary, wood-fired mud ovens.

University of Michigan researchers and their colleagues looked at the air pollutant exposures and health symptoms experienced by fish smokers in two coastal cities in the West African nation of Ghana. They compared the measured exposures and the self-reported symptoms to a control group of local women who work at other occupations, then conducted a statistical analysis to look for significant connections.

The researchers found that exposure to both carbon monoxide and particulate matter (specifically, small airborne particles called PM2.5 that include soot, smoke and dust) was 2.6 times greater among fish smokers than in the control group. All PM2.5 exposures exceeded World Health Organization safety guidelines.

Reports of poor eyesight, burning eyes and dizziness were all strongly correlated with fish smoking. Previous studies have shown that smoke exposure may cause or exacerbate poor eyesight, including from cataracts and age-related macular degeneration.

Shortness of breath, difficulty breathing, wheezing, cough with phlegm and other symptoms indicative of severe respiratory distress were more prevalent in fish smokers compared to members of the control group, according to the study.

In some cases, headaches were statistically associated with fish smoking and carbon monoxide exposure. Fish smokers were also more likely to have burns on their bodies than members of the control group.

The study was published online Jan. 12 in the journal Environmental Health Perspectives. The project began as dissertation research by study co-author Antwi-Boasiako Amoah at the University of Ghana.

“The health burden from fish smoking likely impacts millions of workers in West Africa and is just one of many occupations that use polluting solid-fuel combustion,” said Cheryl Weyant, lead author of the study and a postdoctoral fellow in the FUEL (Forest Use, Energy and Livelihoods) Lab at U-M’s School for Environment and Sustainability.

Other common occupations in the region that involve burning wood or other forms of biomass include brick-kiln workers, charcoal producers, street-food vendors, sugar-cane processors and shea butter producers, said Weyant, an interdisciplinary air pollution scientist whose research centers around combustion technologies for household and industrial energy.

The researchers estimate that there are about 6 million fish smoking ovens in West Africa. In Ghana, the job of fish smoking is often part of a household enterprise in which the man fishes and the woman processes the fish. Refrigeration is not widely available, so smoking is used to preserve the fish, some of which make their way to markets in London and New York. 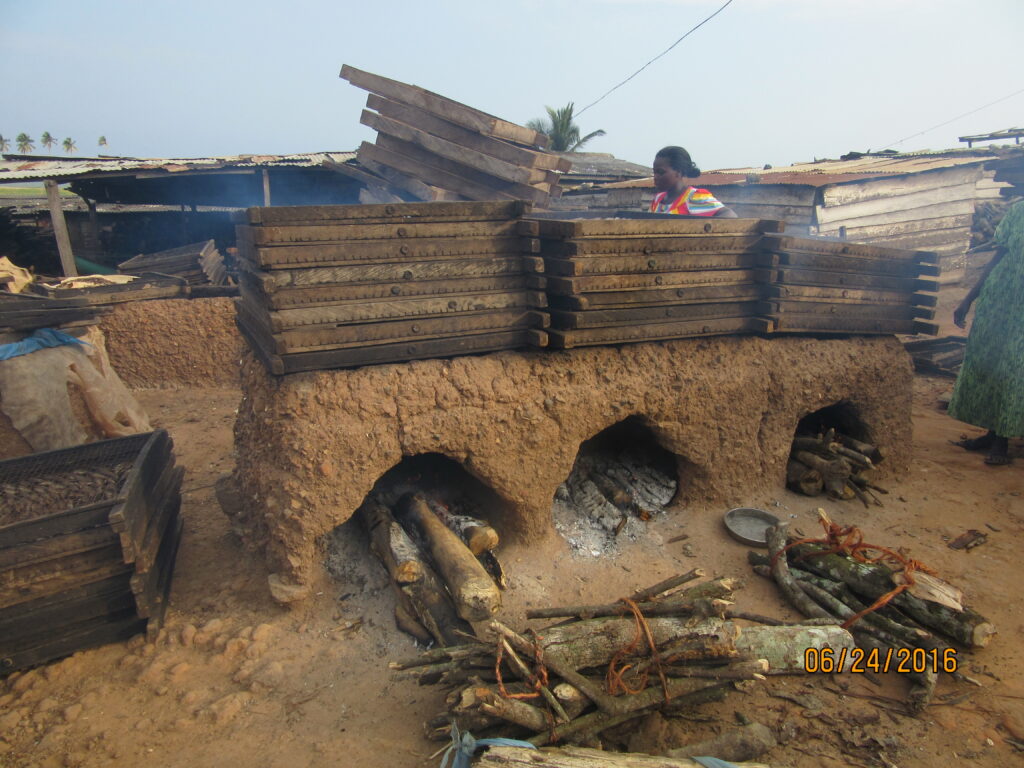 Firewood is loaded into the rudimentary mud ovens, and trays of fish are stacked on top for smoking, which is done to preserve the fish. Image credit: Pam Jagger

Firewood is loaded into homemade mud ovens, and wooden-framed metal trays are loaded with fish and stacked atop the ovens for smoking.

Most of the work is done outdoors or in partially enclosed settings, though about 8% of the smokers were indoors. The U-M-led research team found that workers who used open-air smokers were exposed to less than half the carbon monoxide compared to those who used indoor smokers.

“We were able to show that working with wood combustion for about five hours per day has measurable health and exposure associations, even when used outdoors,” said study senior author Pamela Jagger, director of the FUEL Lab and an associate professor at the U-M School for Environment and Sustainability.

“Fish smoker health may be improved by working in well-ventilated spaces and using improved smokers that have been field-tested to verify emissions reductions,” Jagger said.

The study involved a health questionnaire administered to about 300 women who smoke fish in the coastal Ghanaian cities of Moree and Elmina. The control group consisted of women engaged in other occupations including businesswomen, tradeswomen, fish salters, tailors and hairdressers (152 total). Twenty-four-hour carbon monoxide and PM2.5 exposures were measured for a subset of the study participants. 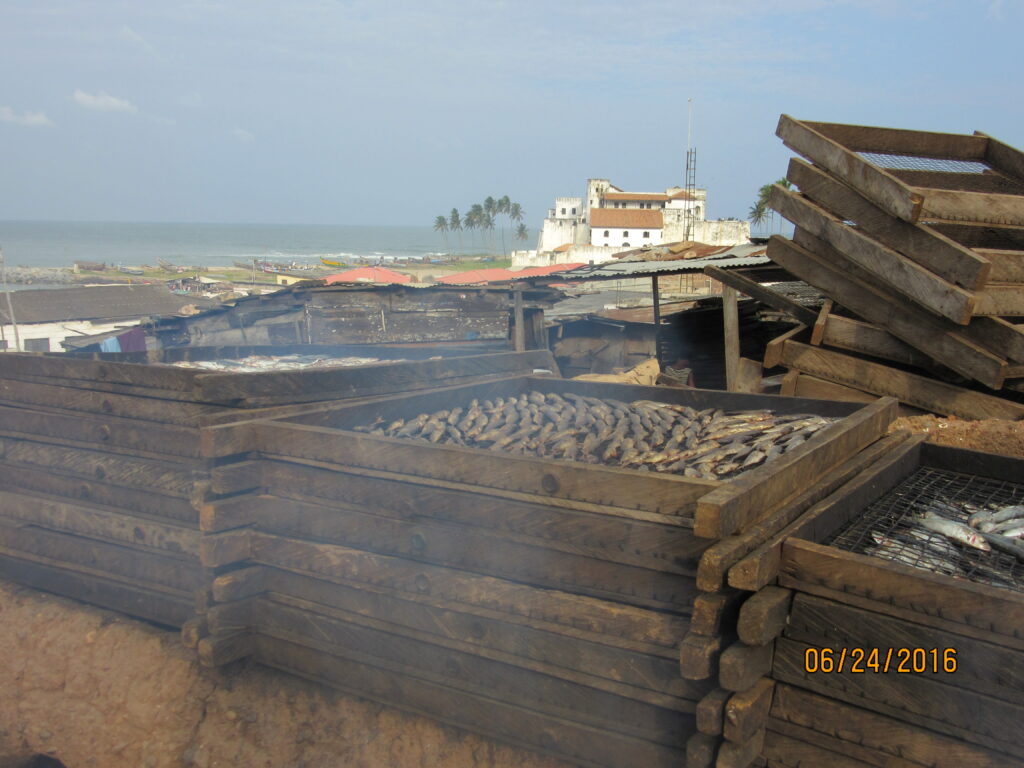 Interestingly, even members of the coastal Ghanaian control group—who were not engaged in fish smoking—had greater exposure to carbon monoxide and PM2.5 pollutants than women from inland Ghana, according to the study.

“A possible explanation is that fish smoking increases local ambient pollution, raising the baseline exposure of nonfish smokers,” according to the study authors. “Because exposure rates in controls were also high, the true health effect estimates of fish smoking relative to a clean environment may be greater than reported here.”