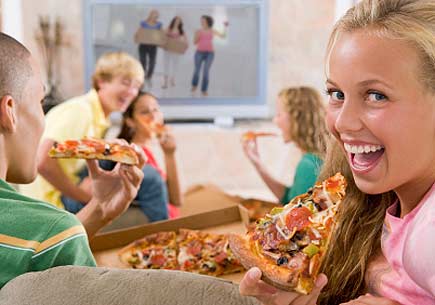 A new University of Michigan study found that regardless of body weight, teens had high brain activity during food commercials compared to nonfood commercials.

“It appears that food advertising is better at getting into the mind and memory of kids,” said Ashley Gearhardt, U-M assistant professor of psychology and the study’s lead author. “This makes sense because our brains are hard-wired to get excited in response to delicious foods.”

Children see thousands of commercials each year designed to increase their desire for foods high in sugar, fat and salt. Researchers from U-M, the Oregon Research Institute and Yale University analyzed how the advertising onslaught affects the brain.

The video showed 20 food commercials and 20 nonfood commercials featuring major brands such as McDonald’s, Cheerios, AT&T and Allstate Insurance. Study participants were asked to list five commercials they saw and to rate how much they liked the product or company featured in the ads.

Teens whose weight was considered normal had greater reward-related brain activity when viewing the food commercials compared to obese adolescents. Gearhardt said this suggests that all teenagers, even those who are not currently overweight, are affected by food advertising and that exposure could lead to future weight gain in normal weight youth.

The study concluded that obese participants may attempt to control their response to food commercials, which might alter the way their brain responds. But if these teens are bombarded with frequent food cues, their self-control might falter—especially if they feel stressed, hungry or depressed.

Gearhardt said brain regions that are more responsive in lean adolescents during food commercials have been linked with future weight gain. These findings, which appear in the current issue of Social Cognitive and Affective Neuroscience, may inform the current debates about the impact of food advertising on minors.

The study’s other authors were Sonja Yokum and Eric Stice, both from the Oregon Research Institute, and Jennifer Harris and Kelly Brownell from Yale University. The study was funded by the Rudd Center for Food Policy and Obesity, Robert Wood Johnson Foundation and National Institute of Health.