For diabetics, a steady job is good for your health 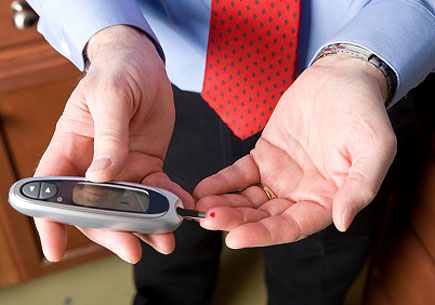 ANN ARBOR—If you’re diabetic or prone to diabetes, having a steady job appears to be good for your health, and not just because of the insurance coverage.

A new University of Michigan study found that that jobless working-age people with diabetes are less likely to adhere to their oral anti-diabetic medications than diabetics who are employed. Further, people of working age with diabetes are more likely to be unemployed than those who do not have diabetes.

The lack of a clear-cut, cause-and-effect relationship between insurance and medication adherence surprised lead researcher Rajesh Balkrishnan of the U-M College of Pharmacy and School of Public Health.

“Improved use of medications is more than just a facet of having medical insurance. It is linked to bigger issues such as being employed, periods of joblessness or a personal financial strain,” said Balkrishnan, who believes that a healthier, active lifestyle and access to medical care resources through employers that want employees to remain productive play a big role in adherence.

Other factors that account for lack of medication adherence include lack of financial resources, stress due to unemployment and lack of access to health care.

Researchers looked at diabetes because it is one of the most commonly present chronic conditions in working-age adults in the United States, Balkrishnan said. And globally, diabetes is the seventh-leading cause of death and the eighth-most costly disease to treat. In 2007, total health care costs for diabetes were estimated at $174 billion.

“Workforce participation for adults with diabetes and other chronic conditions command the attention of public policymakers, particularly when prioritizing resource allocation,” he said. “As a starting position, health care providers and systems need standard processes to identify individuals facing financial pressure and their vulnerability to lower medication adherence.”

Co-authors include Mary Davis-Ajami of the University of Maryland College of Nursing and Milap Nahata, Gregory Reardon and Eric Seiber of the Ohio State University College of Pharmacy.