For new refugees, ‘higher education is a path to freedom’ 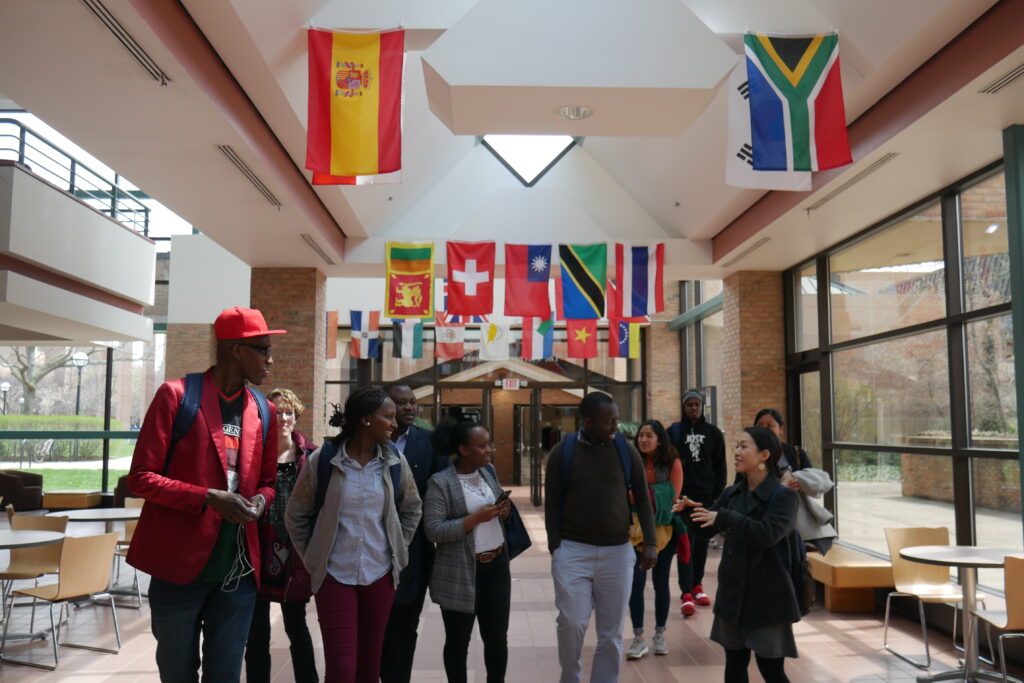 ANN ARBOR—Levis Hakundawa, a college graduate and social worker, is a role model for the Congolese community in Grand Rapids, Michigan. Sharing the story of his educational journey, he tries to embolden new refugees to dream big, especially the teenagers.

“I want to encourage young kids and teenagers to pursue education,” said Hakundawa, who resettled to Michigan in 2011. “I want them to know that learning is the key for success in this country.”

[RE]vive’s founders Brooke Bacigal and Ayah Kutmah couldn’t agree more. Founded in 2018, the initiative utilizes the resources of the university to combat challenges faced by refugee communities, specifically, barriers to higher education, providing them with tools they can use to begin to overcome these obstacles and pursue higher education.

Higher education is a path to freedom.

“Higher education is a path to freedom,” said Kutmah, a junior majoring in political science and international studies with a focus on the Middle East.

The daughter of Syrian parents, Kutmah had always been involved with refugee communities in Louisville. She became even more invested, however, after the 2011 Syrian revolution and subsequent civil war that led to the expulsion of millions of Syrian refugees.

“I really became active in organizing with local organizations to coordinate to help welcome and resettle refugees and represent them to local officials and media,” she said.

Once in college, Kutmah was introduced to the Michigan Refugee Assistance Program, where she started as a volunteer. She also met Bacigal, a student at the Ford School of Public Policy, who had similar interests and also wanted to work closely with refugee communities.

Together, they co-founded [RE]vive so that refugee students would have the resources to pursue projects that students often take for granted, like college education and job opportunities.

Last year, the club received $13,000 from optiMize, a U-M student-led organization that offers workshops, mentorship and funding for students to create self-directed projects that make a positive impact. [RE]vive created and taught a workshop for college preparation and professional development skills to Syrian refugee students and teachers in Istanbul.

We want to help them feel hopeful about their futures and have the necessary tools and skills to achieve what they are interested in pursuing.

“We don’t ever want to be viewed as prescriptive, but as empowering,” Bacigal said. “We want to help them feel hopeful about their futures and have the necessary tools and skills to achieve what they are interested in pursuing.”

This year, they coordinated similar workshops in Louisville, Kentucky, and now in Ann Arbor. For the Ann Arbor workshop, [RE]vive also partnered with a student/faculty research team from the School of Social Work and Taubman College of Architecture and Urban Planning that works with refugee-run organizations in Grand Rapids and Detroit.

“Education is our common priority,” said Odessa Gonzalez Benson, assistant professor of social work. “This is an enriching approach for all parties. We really get involved with the community, so it leads to the most meaningful research questions.”

[RE]vive and the Congolese organizations, along with U-M research teams, plan to have new workshops this fall, including one in October, another during the largest annual event of the Congolese community on Thanksgiving Day, and more in the long-term future.

Aline Diama, originally from Kampala, Uganda, was part of the Grand Rapids Congolese community that visited U-M. She hopes to follow in Hakundawa’s footsteps by getting a college degree.

“I am so excited to have the opportunity to be here and learn so many new things,” she said. “I want to explore my possibilities to reach my professional goals. I want to be a nurse and be able to, one day, help people in my country who have no access to doctors or hospitals.”