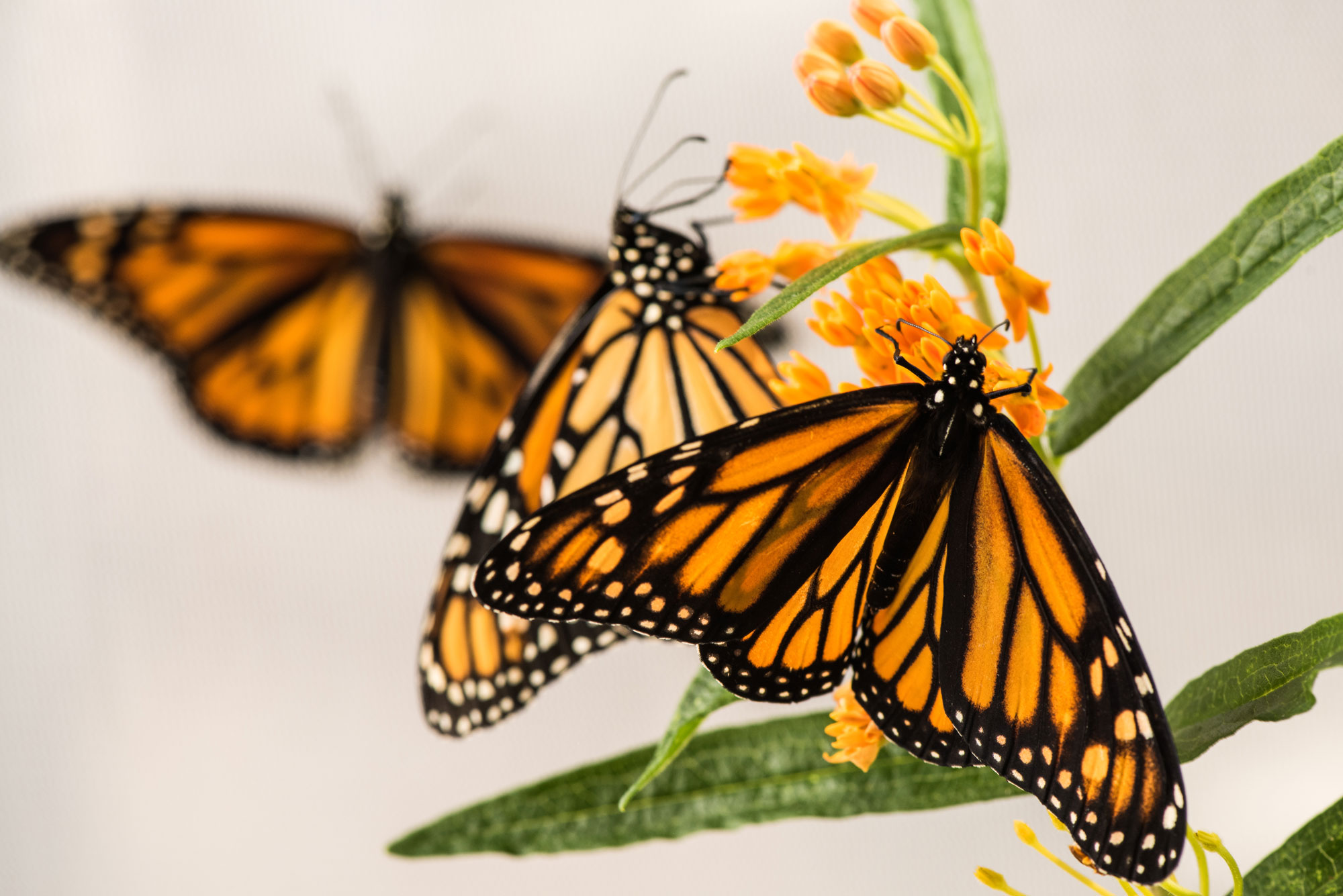 Monarch butterflies on milkweed flowers. Image credit: Austin Thomason/Michigan PhotographyANN ARBOR—Experiments with monarch butterfly caterpillars and the milkweed plants on which they feed have shown for the first time that interactions across four biological kingdoms can influence disease transmission.

Monarchs are susceptible to various parasites that can weaken them and shorten their lifespan. It’s been known for some time that toxins produced by milkweed plants can protect monarchs from those parasites.

In a paper scheduled for online publication Oct. 13 in the journal Proceedings of the Royal Society B, researchers from the University of Michigan and Emory University show that root fungi that form a symbiotic relationship with milkweed plants also play a role in disease transmission.

The symbiotic fungi in question are called arbuscular mycorrhizal fungi. In return for sugars, these fungi provide plants with nutrients and water.

“All four of these kingdoms are connected in the ecology of this disease,” said Hunter, a professor in the Department of Ecology and Evolutionary Biology. “Mycorrhizal fungi associated with the roots of milkweed plants change the medicinal chemistry of milkweed leaves and therefore the transmission of the monarch parasites.”

Because more than 90 percent of land plants associate with mycorrhizal fungi, the monarch findings likely have important implications for the study of community ecology in general and disease ecology in particular, according to the authors. 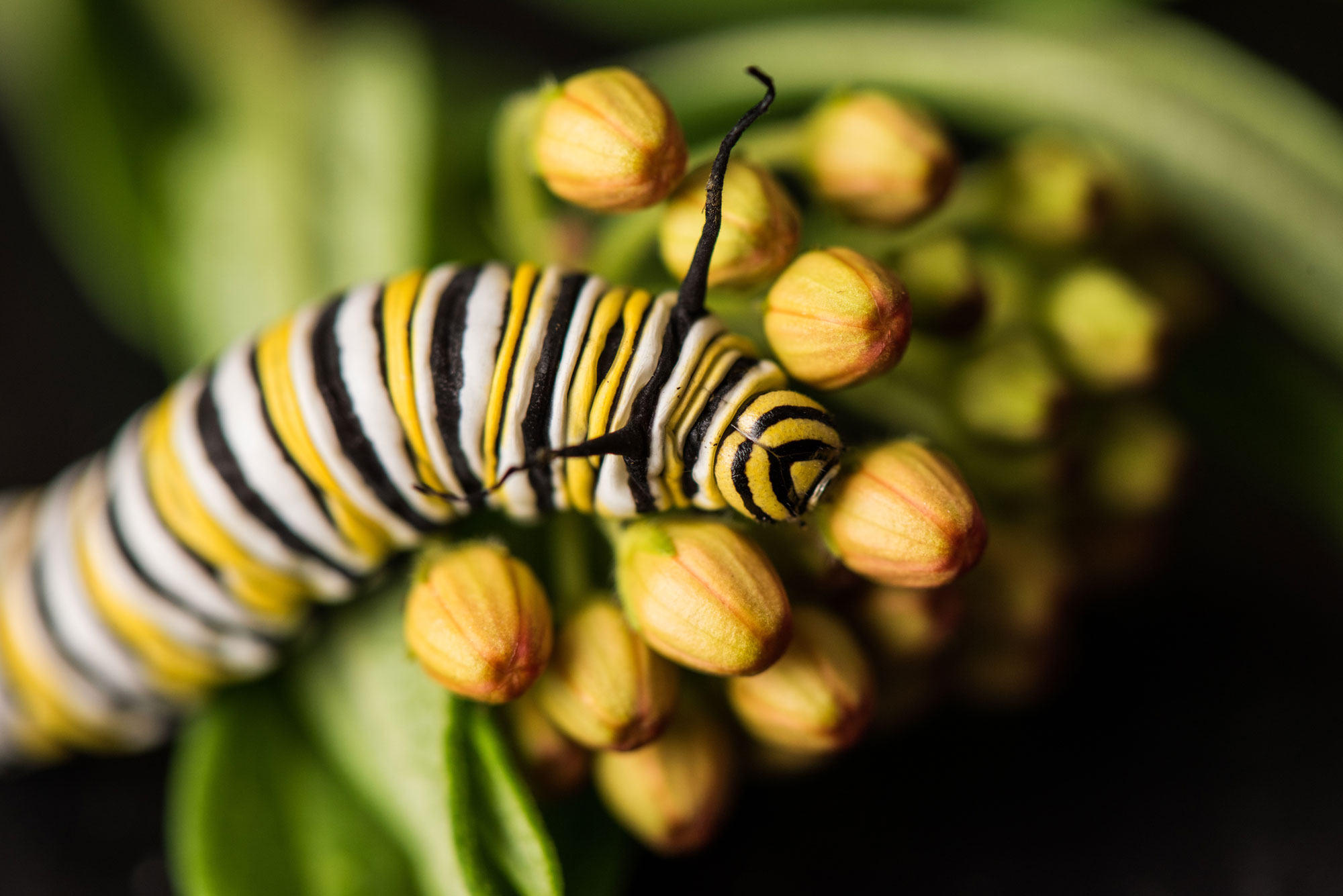 Monarch caterpillar on a milkweed plant. Image credit: Austin Thomason/Michigan PhotographyAnd since humans obtain about half of their new pharmaceuticals from plants, mycorrhizal fungi likely affect not only the medicinal quality of plants but the potential for new drug discoveries, as well, Hunter said.

The first author of the paper is Leiling Tao, a former doctoral student in Hunter’s lab who is now a postdoctoral researcher in the laboratory of Emory biologist Jaap de Roode. The other U-M author is Camden Gowler, a doctoral student in the Department of Ecology and Evolutionary Biology.

“It’s well known that these fungi are important to plants and provide a lot of services, such as helping them cope with different types of stresses,” Tao said. “What we didn’t know before was that they also affect host-parasite interaction in animals above the ground.”

In their greenhouse experiments, the researchers grew six species of milkweed that produce varying amounts of medicinal toxins called cardenolides. The plants were grown either with no mycorrhizal fungi, with low levels, or with high levels.

The various milkweed plants were fed to monarch caterpillars, which were later exposed to spores from the protozoan parasite Ophryocystis elektroscirrha, a relative of the parasite that causes malaria in humans.

The researchers found that the fungi affected the virulence of the parasite and the ability of monarchs to resist infection and to tolerate the pathogen once infected. The effects varied with the species of milkweed and the density of the mycorrhizal fungi in the plant roots.

“We found that these changes caused by the fungi affect the growth of a protozoan parasite, so that monarchs become sicker on some milkweed plants and healthier on others,” de Roode said.

The researchers conclude that soil organisms may play an under-appreciated role in the ecology of many land-based host-parasite systems.

In 2010, Hunter and de Roode discovered that female monarch butterflies infected with O. elektroscirrha prefer to lay their eggs on species of milkweed that will make their caterpillars less sick. Monarchs appear to have evolved the ability to medicate their offspring by choosing milkweed plants with high levels of cardenolide toxins.

In addition to Tao, Hunter and Gowler, authors of the paper are de Roode and Aamina Ahmad of Emory University. The work was supported by the National Science Foundation.