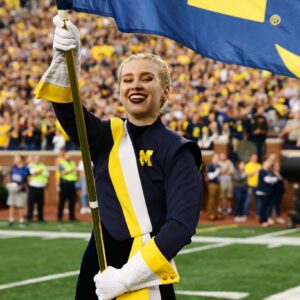 Richard Balogh, who attended the University of Michigan in the 1950s, is ready for another Wolverine graduation ceremony in the family.

His granddaughter Amanda Balogh is a fourth-generation U-M student and graduates this weekend. An undergrad in the College of Literature, Science, and the Arts, she is the 14th member of the family who attended the university.

Grandpa Balogh will watch the graduation ceremony virtually from home on Saturday. Next to him, will be his wife Mary Balogh, who he met at U-M 66 years ago.

“We are so, very proud of Amanda. She’s an outstanding young lady and we are sure she will have a beautiful future,” Richard Balogh said.

Besides Amanda, the Balogh’s three sons, who all met their wives on campus as undergraduate students, and their other six grandchildren have gone to the University of Michigan. The pioneer was Amanda’s great grandmother, Helen Cortade, who attended U-M for her master’s degree in education in the 1920s. 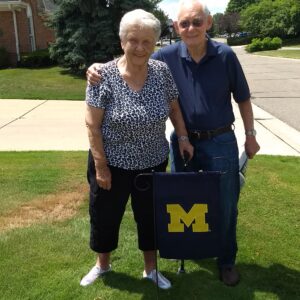 “Different generations of our family have gone to the university and they’ve all done very very well in their careers. We could not be more proud of any of them,” said Grandma Mary.

Amanda says it’s difficult not to talk about something related to the Wolverines during all of the family gatherings throughout the years.

“You could definitely tell that the university has changed over the many years. It is so interesting to hear my grandparents’ stories back then,” she said. “The Hill was all girls’ dorms. The other dorms, like East and South Quad, were all men. I also learned from them that the women had a curfew back in the day.”

“My husband and I had tickets for 35 years or more,” Mary said. “All the time our children were in college, we would go up for the football games and tailgate. So many happy moments.”

Amanda is graduating with a major in environmental science and a minor in physics. During her time in college, she volunteered with sustainability efforts, went on several alternative spring break trips and researched post-traumatic stress disorder at a Veteran’s Hospital lab.

She is also a four-year member of the Michigan Marching Band, earning two scholarships for her leadership with the Flags.

“I just really like spinning flags in the marching band,” she said. “It has been a formative part of my college experience, allowing me to travel with the band to rival schools and make many friends with other people in the band.”

Being part of U-M’s Camp Davis in western Wyoming was another highlight of Amanda’s time as an undergrad student. Since 1929, these outdoor classrooms have offered students some of the most scenic and interesting classes in geology, ecology and history in North America.

“I took the environmental science field course there. My classmates and I got to go on several hikes in and near the Tetons,” Amanda said. “We collected water and soil samples, made observations of the ecology and terrain, and did a few other projects such as mapping glacial deposits and surveying the land and water table.

“I learned a lot about environmental science fieldwork. It was a great experience that encouraged me to pursue jobs where I can do fieldwork. It also made my major feel very tight-knit and friendly.”

Amanda is now completing an internship with the Environmental Protection Agency and looks forward to working out West in the field.

“I might end up doing environmental consulting,” she said. “In the long run, I would hope to do environmental geology, work in the intersection of knowing about the rocks and everything, but also applying it to keeping the environment safe and people healthy. There’s a lot of relation between contamination and drinking water. The environment and humans are very interrelated so it would be good to help both.” 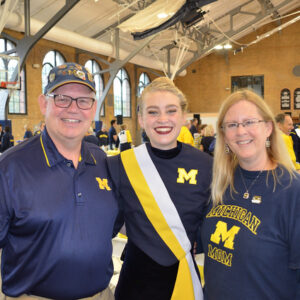 Amanda with her parents—Jerry Balogh and Lynn Halton

Third-generation U-M students—Amanda’s parents—Jerry Balogh and Lynn Halton celebrated two graduations in recent years. Their oldest, Carli Balogh, also studied earth and environmental sciences at LSA and their son, Trent Balogh, graduated from the College of Engineering and is now pursuing a master’s degree at UM-Dearborn.

“I always wanted to attend Michigan and was proud to join both of my brothers on campus when I started there in fall 1981,” Jerry said. “Since I always knew I wanted to follow in my dad’s footsteps to become an engineer, I studied mechanical engineering, and so did our son.”

Although the entire Balogh crew will not be able to celebrate in the Big House this weekend, Jerry and Lynn will be there as volunteers to help check in students.

“I’m very excited about Amanda’s graduation, however, it is bittersweet,” Lynn said. “I’ve been a proud Michigan parent for 10 years. It has been a joy to see our kids find their passions and interests while at the University of Michigan. I am so thrilled that they are joining us as alumni from our alma mater.”

“All of my family members have definitely found smaller communities within the larger U-M community,” Amanda said. “From sororities/fraternities to the Overwatch club or marching band, I think we’ve all had unique experiences at U-M that make each of our college experiences a little bit different.”