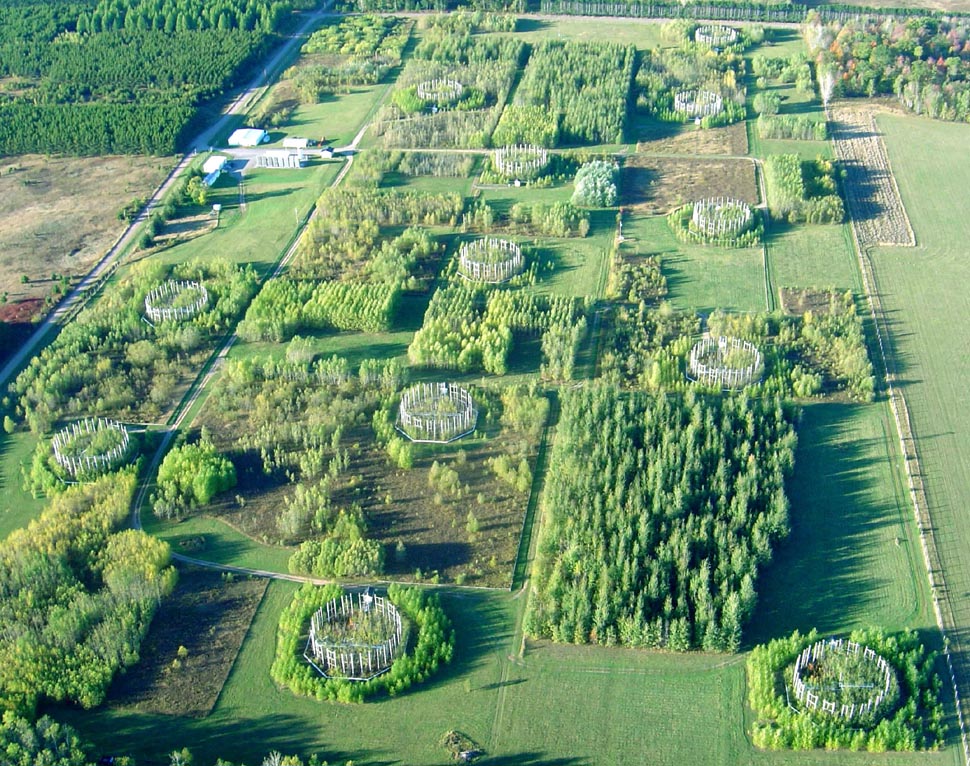 An aerial view of the 38-acre experimental forest in Wisconsin where U-M researchers and their colleagues continuously exposed birch, aspen and maple trees to elevated levels of carbon dioxide and ozone gas from 1997 through 2008. Credit: David Karnosky, Michigan Technological UniversityANN ARBOR—North American forests appear to have a greater capacity to soak up heat-trapping carbon dioxide gas than researchers had previously anticipated.

As a result, they could help slow the pace of human-caused climate warming more than most scientists had thought, a U-M ecologist and his colleagues have concluded.

The results of a 12-year study at an experimental forest in northeastern Wisconsin challenge several long-held assumptions about how future forests will respond to the rising levels of atmospheric carbon dioxide blamed for human-caused climate change, said University of Michigan microbial ecologist Donald Zak, lead author of a paper published online this week in Ecology Letters.

“Some of the initial assumptions about ecosystem response are not correct and will have to be revised,” said Zak, a professor at the U-M School of Natural Resources and Environment and the Department of Ecology and Evolutionary Biology in the College of Literature, Science, and the Arts.

To simulate atmospheric conditions expected in the latter half of this century, Zak and his colleagues continuously pumped extra carbon dioxide into the canopies of trembling aspen, paper birch and sugar maple trees at a 38-acre experimental forest in Rhinelander, Wis., from 1997 to 2008.

Some of the trees were also bathed in elevated levels of ground-level ozone, the primary constituent in smog, to simulate the increasingly polluted air of the future. Both parts of the federally funded experiment?the carbon dioxide and the ozone treatments?produced unexpected results.

Previous studies have concluded that this growth spurt would be short-lived, grinding to a halt when the trees can no longer extract the essential nutrient nitrogen from the soil.

But in the Rhinelander study, the trees bathed in elevated carbon dioxide continued to grow at an accelerated rate throughout the 12-year experiment. In the final three years of the study, the CO2-soaked trees grew 26 percent more than those exposed to normal levels of carbon dioxide.

It appears that the extra carbon dioxide allowed trees to grow more small roots and “forage” more successfully for nitrogen in the soil, Zak said. At the same time, the rate at which microorganisms released nitrogen back to the soil, as fallen leaves and branches decayed, increased.

“The greater growth has been sustained by an acceleration, rather than a slowing down, of soil nitrogen cycling,” Zak said. “Under elevated carbon dioxide, the trees did a better job of getting nitrogen out of the soil, and there was more of it for plants to use.”

Zak stressed that growth-enhancing effects of CO2 in forests will eventually “hit the wall” and come to a halt. The trees’ roots will eventually “fully exploit” the soil’s nitrogen resources. No one knows how long it will take to reach that limit, he said.

The ozone portion of the 12-year experiment also held surprises.

Ground-level ozone is known to damage plant tissues and interfere with photosynthesis. Conventional wisdom has held that in the future, increasing levels of ozone would constrain the degree to which rising levels of carbon dioxide would promote tree growth, canceling out some of a forest’s ability to buffer projected climate warming.

In the first few years of the Rhinelander experiment, that’s exactly what was observed. Trees exposed to elevated levels of ozone did not grow as fast as other trees. But by the end of study, ozone had no effect at all on forest productivity.

“What happened is that ozone-tolerant species and genotypes in our experiment more or less took up the slack left behind by those who were negatively affected, and that’s called compensatory growth,” Zak said. The same thing happened with growth under elevated carbon dioxide, under which some genotypes and species fared better than others.

“The interesting take home point with this is that aspects of biological diversity?like genetic diversity and plant species compositions?are important components of an ecosystem’s response to climate change,” he said. “Biodiversity matters, in this regard.”