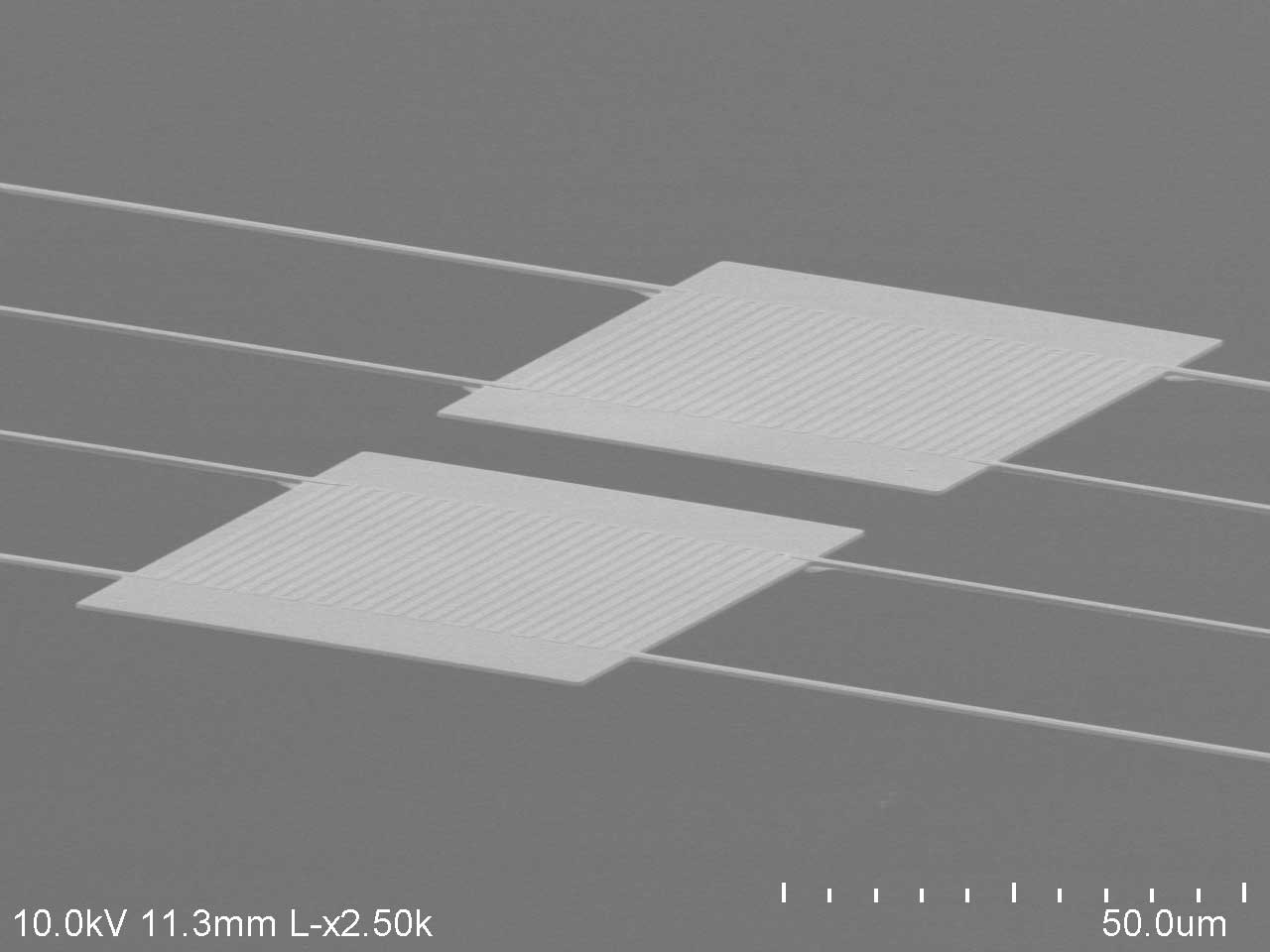 An electron microscope image of the experimental set-up with two plates, each 0.06 x 0.08 mm. At their thinnest, with a thickness of just 0.00027 mm, the heat flow between them was 100 times higher than expected. Image credit: Dakotah Thompson, Michigan Engineering

ANN ARBOR—As much as 100 times more heat than predicted by the standard radiation theory can flow between two nanoscale objects, even at bigger-than-nanoscale distances, researchers at the University of Michigan and the College of William and Mary have reported in the journal Nature.

The new results could have implications for better solar cells, materials that behave like one-way valves for heat flow and perhaps even a heat-based computing platform.

A mystery in the lab

Max Planck’s theory of radiation, proposed in 1900, set the stage for quantum mechanics and has held up well over the intervening century. But five years ago, a microstructure in the lab of Pramod Reddy, U-M professor of mechanical engineering, was letting an astonishing amount of heat flow between objects that should have been insulated from one another.

“We couldn’t figure out the cause for a long time. It seemed like our calculations based on the standard Planck theory couldn’t account for what we observed,” said the study’s first author, Dakotah Thompson, who at the time was a new graduate student in Reddy’s lab.

“The question from Pramod and me to the students was, ‘Are you sure you calculated this right?'” said Edgar Meyhofer, a professor of mechanical engineering at U-M and senior author.

But they had. It became Thompson’s mission to find out what was going on.

The heat flow rate between two objects has a limit that depends on details like the size of the objects, the surfaces that are facing one another, their temperatures, and the distance between them. Heat travels between objects as electromagnetic waves, such as infrared radiation and visible light.

Previously, Reddy and Meyhofer had led a study showing that heat can travel 10,000 times faster than expected between objects separated by nanoscale gaps—smaller than the dominant wavelength of the radiation—but at larger separations, that mechanism wouldn’t be in play.

In very thin plates, heat shoots out the edges

Under the guidance of Meyhofer and Reddy, Thompson devised a series of experiments to explore the unexpected observations. From the beginning, they suspected it had something to do with the thickness of the objects.

To illustrate the concept, Reddy produced two cards from his wallet, laying one on his palm and the other across his fingers with a gap between them. Thompson spent many months in the Lurie Nanofabrication Facility making matched pairs of semiconductor plates similar in shape to the cards, but about a thousand times smaller in length and width. The thickness of the rectangular plates was anywhere between 10,000 nanometers (0.01 millimeters) to 270 nanometers. He suspended these on very narrow beams about a hundred times thinner than human hair.

In an object the size and shape of a credit card, heat would ordinarily radiate from each of the six sides in proportion to the surface area. But the team found that when the structures were extremely thin—at the thinnest, about half the wavelength of green light—those edges released and absorbed much more heat than anticipated.

With experimental results in hand, Thompson worked closely with Linxiao Zhu, a postdoctoral researcher in Meyhofer’s and Reddy’s lab. Zhu built a detailed mathematical model of the two thin plates and the physics that governs heat transfer between these structures.

After many hours running the model on a supercomputer, Zhu’s results confirmed that the 100-fold enhancement in heat flow occurs because of the way that waves move in the very thin plates. Since the waves run parallel to the plate’s longer dimensions, the heat shoots out the edges. In the identical plate absorbing the energy, the same concept was at work.

“When we model how the plates emit and absorb thermal radiation, it is as though their edges are much thicker,” Zhu said.

What the findings could enable

While the effect is strongest at the microscale and smaller, the emerging field of nanotechnology could mean that we will see this new idea used in devices.

“You could potentially control heat in new ways because we have identified the mechanism of heat transfer,” Reddy said.

Examples proposed by the team include controlling the flow of heat in a way similar to how electronics manage electrons, making heat transistors for next-generation computers and diodes (like one-way valves). For example, future building materials could let heat out during cool summer nights but keep it in during the winter. Solar cells could harness the portion of the sun’s spectrum that isn’t converted to electricity for other purposes. A roof installation could send this lost energy to heat water, for instance.

Reddy cautions that a heat-based computing device would be slower and larger than an electronic version, but he believes it might be preferable in certain situations, such as high-temperature environments where conventional electronics are damaged.