High-impact pain does not impact all Americans the same 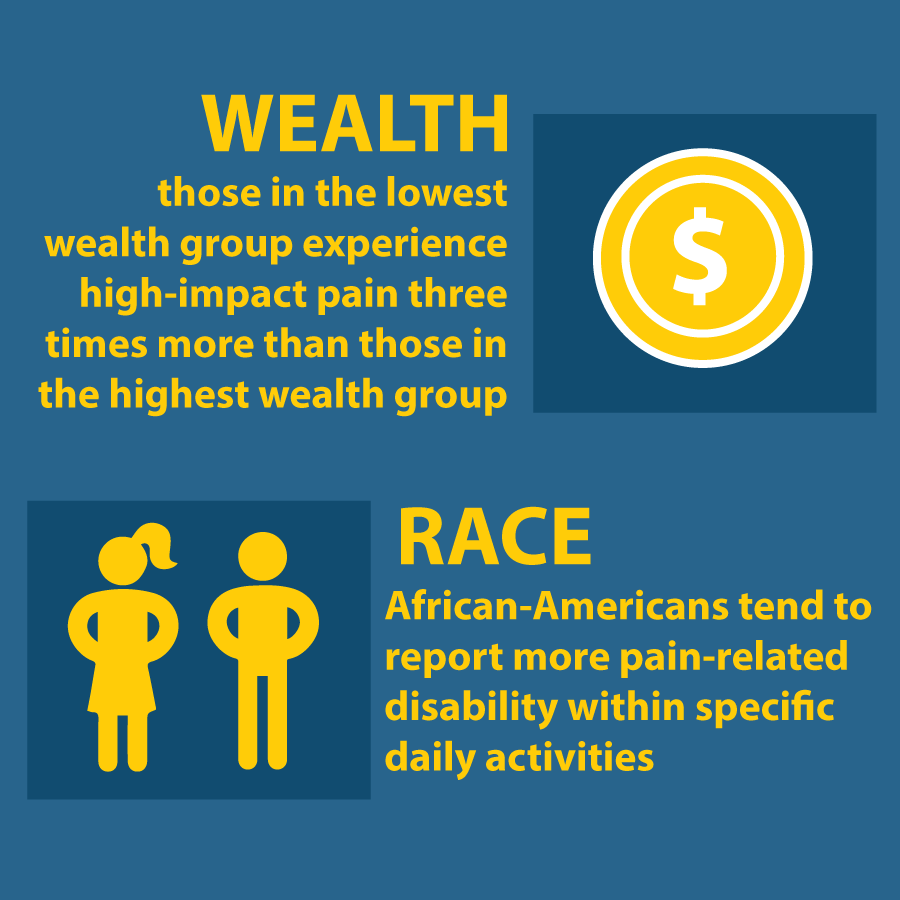 ANN ARBOR—A large number of Americans live with chronic pain, which can limit their quality of life and leads some to seek relief from potentially dangerous opioid medications.

New research from the University of Michigan School of Public Health shows the most debilitating pain hits hardest among people who have the fewest financial resources.

Nearly 10 percent of Americans over age 50 suffer from high-impact, long-standing pain that has a substantial negative effect on work, social or other everyday activities. Yet, those whose household wealth is in the lowest quartile experience high-impact pain three times more than those in the highest wealth group, said Mary Janevic of the Center for Managing Chronic Disease and Department of Health Behavior and Health Education at the U-M School of Public Health.

“While pain affects all sectors of society, wealthier people tend to have better health, less psychological stress, occupations that are less likely to cause injury, better access to medical care and the ability to pay for ‘extras’ like gym memberships or complementary treatments that help some people manage pain,” said Janevic, assistant research professor at the School of Public Health. “They also can pay for conveniences like more accessible homes that enable them to function better even when they are experiencing pain.”

The study, based on a large nationally representative sample of midlife and older Americans, also found that African-Americans, as well as people with less education and wealth, tend to report more pain-related disability within specific categories of daily activities and were more likely to experience financial problems due to pain.

“In addition to accumulating less wealth due to a long history of discrimination and housing segregation, other research has shown that African-Americans tend to be undertreated for pain. These factors could contribute to the observed racial disparities in pain disability,” Janevic said.

In a Journal of Pain article, Janevic and colleagues share their findings from the U-M-led Health and Retirement Study that since 1992 has conducted surveys of Americans over 50. Out of a group of nearly 1,800 respondents who were asked in detail about their pain, the researchers found that 778 had pain in the last year lasting at least one week and 176 of those had prolonged episodes, defined as seven months or longer, with substantial adverse effects on daily life.

The health conditions most strongly associated with high-impact pain were arthritis and depression.

“Socioeconomic and racial/ethnic disparities in chronic pain, like all health disparities, will not go away until we have a more equitable, less discriminatory society with universal access to effective treatments,” Janevic said. “Pursuing policies that advance this vision is probably the most important thing we can do.”

In the meantime, Janevic said the health care system should work to make interdisciplinary pain treatment accessible and affordable to all older adults.

“We need to expand access among vulnerable groups to evidence-based nonpharmacological treatments such as cognitive behavioral therapy and chronic pain self-management programs that can help reduce pain’s effect on daily functioning,” she said.

Other authors include: Sara McLaughlin of Miami University, Alicia Heapy of Yale University School of Medicine, and Casey Thacker and John Piette of the U-M School of Public Health.