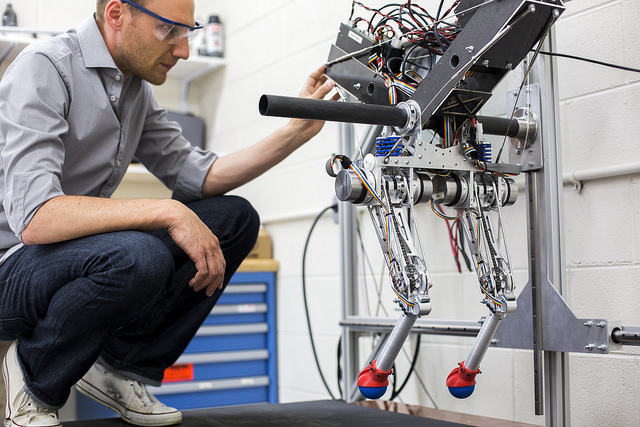 David Remy, ME Professor, works in the Robotics and Motion Laboratory (RAMLab) in the GG Brown Building, testing the research group’s new robot, Ramone. Image credit: Joseph XuANN ARBOR—A $54-million robotics center at the University of Michigan will help advance the field as researchers say it’s reaching a tipping point—poised to deliver autonomous technologies that are woven into our everyday lives.

The U-M Board of Regents today approved the College of Engineering’s new robotics building project.

The three-story, 100,000-square-foot facility is slated for Hayward Street just east of the Space Research Building on North Campus. While the building’s design has not been set, administrators envision space for machines that walk, fly, drive and swim.

Bringing together faculty and students from across campus, the building will house labs, offices and classrooms. U-M is one of only a few universities that offer both master’s and doctoral degrees in robotics. The Ph.D. program is in its first year.

“Robotics is at a pivot point,” said Dawn Tilbury, associate dean for research at Michigan Engineering and a professor of mechanical engineering. “We’re moving away from robots that live on the factory floor in a cage that humans don’t go into. We’re going to be interacting with robots more, and increasingly, we’re going to see them helping people or doing things in the company of people.”

Across U-M’s campus, more than 40 faculty members from at least six engineering departments, kinesiology and the medical school are working in the field.

They’re making prosthetic limbs that could one day be controlled by the brain; spacecraft to study the solar system and the Earth; autonomous submarines that can map the ocean floor or inspect Navy ship hulls for dangerous mines; as well as a host of walking machines inspired by insects, crabs and humans that have the potential to eventually assist search or rescue tasks. U-M is the birthplace of MABEL, the world’s fastest-running robot with knees. 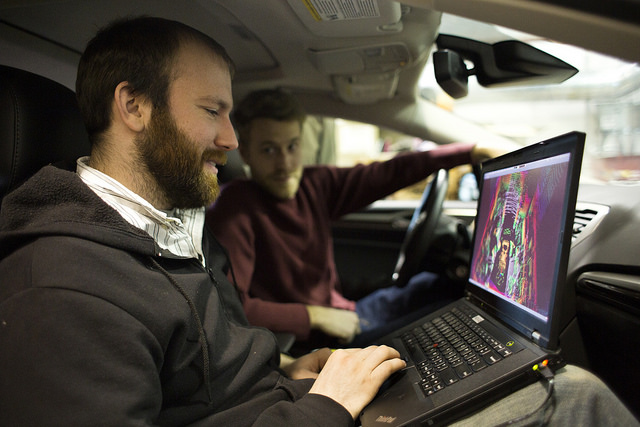 Schuyler Cohen, Engineer in Research, and Ryan Wolcott, Computer Science & Eng PhD Student, discuss the false-color map system generated by the new Automated Ford Fusion. Image credit: Joseph XuOf late, some of the most renowned work is in the area of self-driving cars, and the building will help advance that work. The facility will be less than a half-mile from the Mcity driverless vehicle test site that’s set to open in July. The one-of-a-kind Mcity will simulate an urban environment where researchers can study how vehicles behave in rare but potentially dangerous scenarios. At Mcity, they’ll also test connected and automated vehicle systems and other emerging 21st-century smart-city technologies.

“We are at the inception of the driverless automobile and we have some of the leading faculty in the world doing research in that space,” said David Munson, the Robert J. Vlasic Dean of Engineering. “We expect our campus and Ann Arbor to be among the first testbeds for the technology, and the new robotics facility will help us lead the way.”

In a testament to the interdisciplinary nature of the field, Ryan Eustice is an associate professor of naval architecture and marine engineering who is involved in the driverless car work. He says the math behind both applications is the same. And that’s true beyond his niche.

“Even though these robotics applications look very different, the core problem is the same,” Eustice said. “How does a robot sense the world around it and turn that into a useful mathematical representation of the environment?”

Tilbury says the building will enable a new kind of learning and academic community.

“We want to bring together all of the faculty and students with research in robotics because whether they’re walking, flying, swimming or driving, they use a lot of the same technology,” she said. “We want them to physically share the same space so they can interact and collaborate.”

Mcity, while complementary to the robotics building, is a separate project under the auspices of the Mobility Transformation Center, a partnership with industry and government to lay the foundations for a commercially viable ecosystem of connected and automated mobility.

The robotics building will be paid for by the College of Engineering.