ANN ARBOR—Clark Schmutz spent more than 100 hours last semester reading and digitally scanning hundreds of letters in the correspondence files of the University of Michigan Museum of Zoology’s mammal collections, which date back to the 1800s.

The scanning project is a multiyear effort to make the museum’s correspondence files available online. For Schmutz, who graduated in December with a double major in English and ecology, evolution and biodiversity, it was also an opportunity to search for intriguing stories that illustrate the links between museum collections and conservation.

One day, inside a cardboard box he pulled from the stacks, Schmutz found a typewritten copy of a four-page study titled “Report on the qualifications and development of Isle Royale as a national park” by noted wildlife biologist and wilderness advocate Adolph Murie. It was dated June 13, 1935. 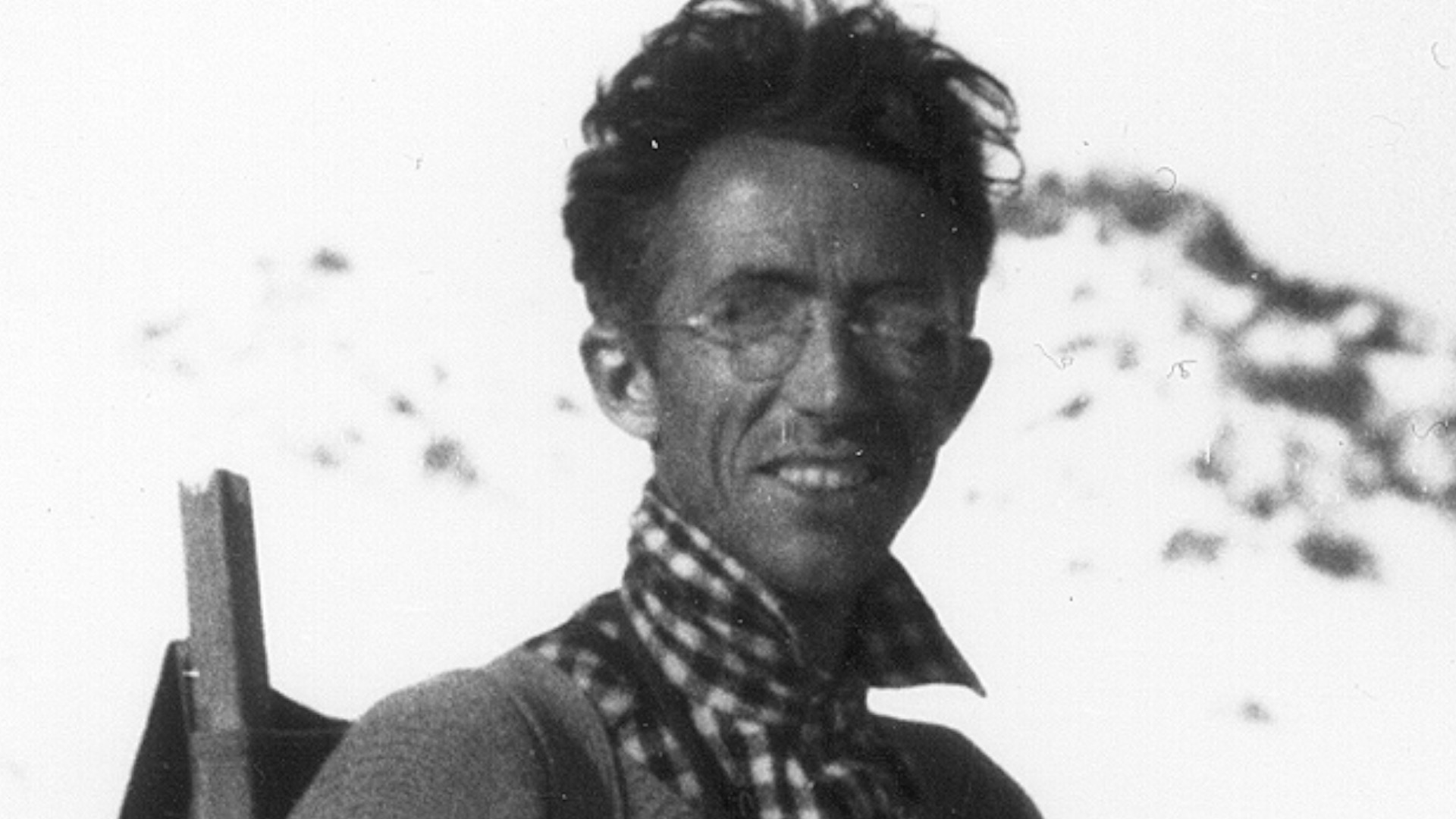 Murie received a doctorate from U-M in 1929 and soon went to work for the National Park Service, where he remained for more than 30 years. He is perhaps best known for studies of Alaskan wolves that led directly to the elimination of predator control at Mount McKinley (now Denali) National Park.

During his time at U-M, Murie conducted fieldwork on Isle Royale, a remote island in northwest Lake Superior, and he brought back more than 100 specimens—from moose jaws to deer mice to great horned owls—that remain in the Museum of Zoology collection. His book “The Moose of Isle Royale” was published by the University of Michigan Press.

“I recommend that Isle Royale be made a national park and administered as a wilderness area,” Murie wrote in his report to Park Service administrators. “Isle Royale is practically uninhabited and untouched. The element of pure wilderness which it contains is rare and worthy of the best care.

“True wilderness is more marvelous (and harder to retain) than the grandiose, spectacular features of our outstanding parks. It alone labels Isle Royale as of park calibre (sic).”

Isle Royale was formally dedicated as a national park in 1940. According to John C. Miles, author of “Wilderness in National Parks: Playground or Preserve,” the National Park Service “generally followed Murie’s advice and kept development to a minimum, resisting constant pressure to improve access and visitor accommodations.”

The park became part of the National Wilderness Preservation System in 1976 and was designated a UNESCO World Network Biosphere Reserve in 1980. 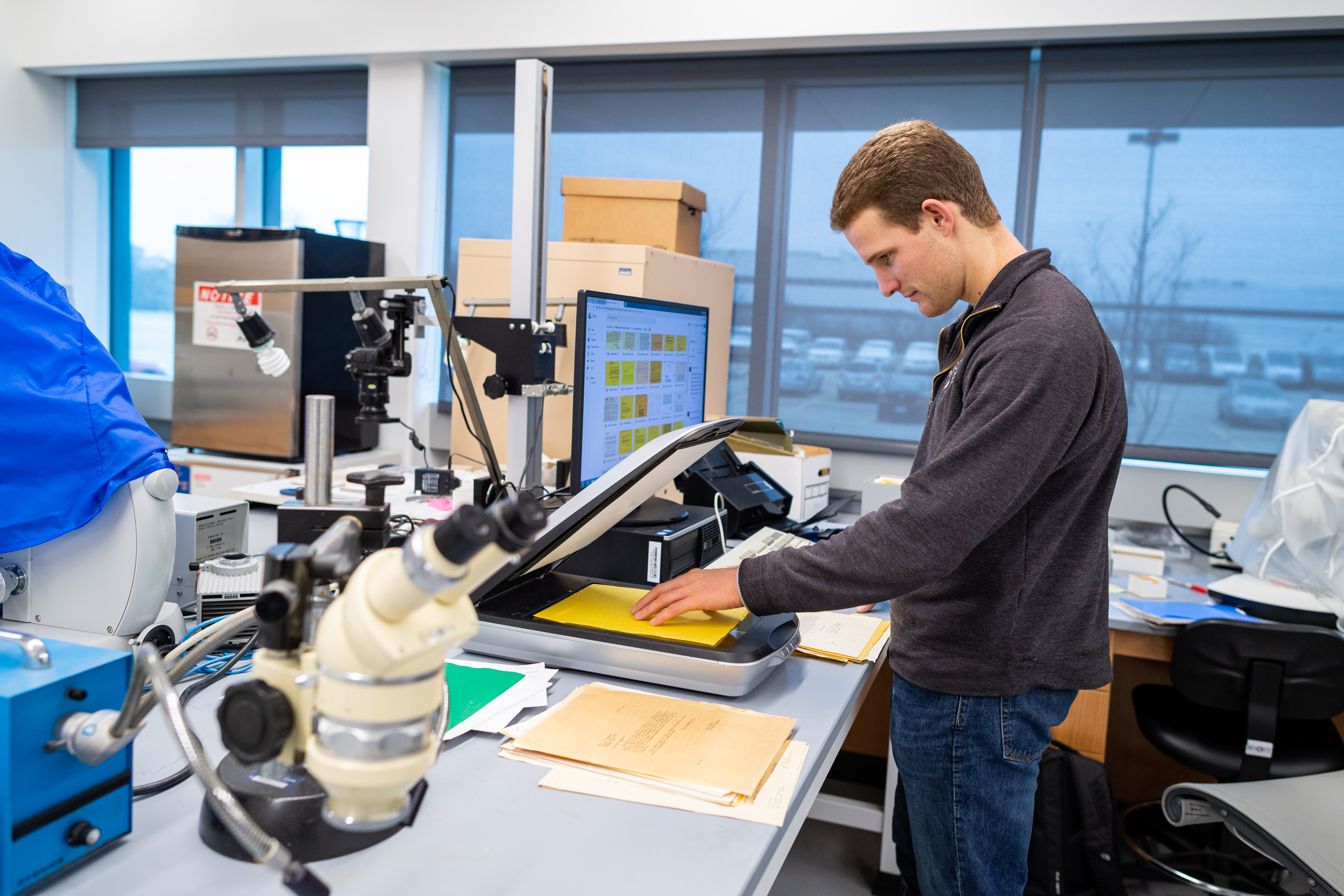 For Schmutz, who scanned the letters as part of a for-credit research project in the Department of Ecology and Evolutionary Biology, the discovery of Murie’s report strengthened his resolve to pursue a career in environmental law and to be an advocate for conservation and environmental protection.

“Murie was one of the seminal figures in the early conservation movement and had spent time as a student at U-M,” Schmutz said. “Isle Royale is a place that you learn about in intro bio classes and is a place that a lot of Michiganders take pride in. Finding original correspondence of Murie advocating for the conservation of Isle Royale was just awesome.”

Schmutz’s adviser on the project was Cody Thompson, the mammal collections manager at the U-M Museum of Zoology and an assistant research scientist in the Department of Ecology and Evolutionary Biology.

The museum collection was recently moved from the U-M central campus to the Research Museums Center, several miles to the south on Varsity Drive. During the move, “We uncovered a lot of old boxes that had not been looked at for quite a long time,” Thompson said.

The mammal collections correspondence files fill 22 cardboard boxes—each containing hundreds of letters. Schmutz made it halfway through one box over the course of the semester.

“This will definitely be a multiyear project, but Clark’s efforts helped build the foundations for a database that will eventually be shared with the University of Michigan Library,” Thompson said.

The library’s Digital Library Platform & Services, known as the DLPS, hosts many searchable digital collections. The original correspondence files will eventually be turned over to U-M’s Bentley Historical Library.

“The overall goal of the project is to make our paper records easily accessible by anybody across the world. This work also highlights the connection between museum collections and conservation,” Thompson said. “These letters are ripe with interesting stories and provide context to our catalogued specimens, as well as details about field expeditions.” 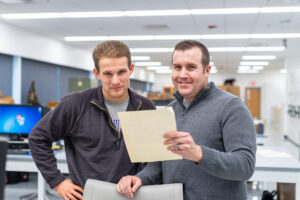 For Schmutz, another highlight of the scanning project was the discovery of a fascinating set of letters involving U-M behavioral ecologist William Burt, who joined U-M in 1935 and was named curator of mammals at the Museum of Zoology in 1938.

That same year, during a field expedition along the Pacific coast of Mexico, he photographed dozens of sea lion carcasses on an island off Baja California. The indiscriminate slaughter of sea lions that Burt documented was later tied to the Dr. W.J. Ross Dog and Cat Food Co., which was shipping sea-lion meat to California for use in pet food.

In January 1939, Burt received a letter from Clinton Abbott, director of the San Diego Museum of Natural History, who was investigating the sea-lion killings and who was seeking photographic evidence. Burt sent Abbott a copy of the picture he’d taken.

“Many thanks for the shocking seal photograph, which provides most eloquent evidence of the seal hunters’ operations,” Abbott replied in a letter that Schmutz found in the correspondence files, along with a copy of the photograph. Sea lions are eared seals.

Later in 1939, an article by Abbott—featuring the Burt photograph—was published in Bird-Lore magazine, a publication of the National Audubon Society. The article sparked public outrage, and five years later the Ross pet food company declared bankruptcy.

“Though Abbott undoubtedly deserves much of the credit, Burt’s efforts to meticulously record the natural history of the local flora and fauna of the Mexican Pacific coast in his field notes, which included direct observation of sea lion rookeries and photographs of these rookeries, undoubtedly provided the evidence that Abbott needed to make his appeal to the general public and government officials,” Schmutz wrote in a final report about his scanning project.

The work of Murie, Burt and other early conservationists “began to build the bridge from collections to conservation,” he wrote. “They played important roles in the preservation of pristine wilderness and advocated for conservation efforts based on data collected through direct observations of wild animals through their fieldwork. And the close connection between natural history collections and conservation continues today.

“As new technological advances increase, natural history collections will be used in ways that the original collector could never have predicted, providing an opportunity for collections to become even more relevant to studies in conservation and other disciplines.”

Watch for a related blog post, “From Roosevelt to the UMMZ: The role of the U-M collections in modern conservation,” by Schmutz and Thompson on the EEBlog.