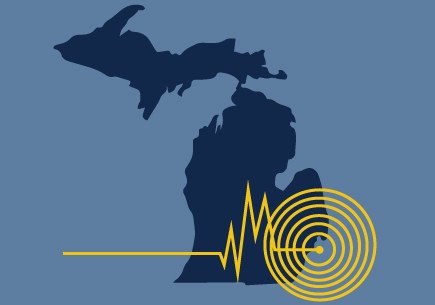 A magnitude-3.2 earthquake beneath westernmost Lake Erie shook Southeast Michigan on Friday evening. The quake occurred south-southeast of Detroit Beach, near Monroe, at 6:55 p.m., at a depth of 5.7 miles, according to the U.S. Geological Survey.

More than 2,000 people reported feeling it by 9:30 p.m. on the USGS website. It was reportedly felt throughout Southeast Michigan and as far away as Bowling Green.

The University of Michigan has experts available to discuss the event.

Ben van der Pluijm is an expert on geohazards, including earthquakes and volcanoes, and their impacts on society. He is a professor in the Department of Earth and Environmental Sciences.

“Stresses from global plate tectonics are transmitted into plate interiors, far from more dramatic plate boundary action, such as along the U.S. West Coast. This magnitude 3-plus quake is an expression of these plate interior stresses, which are released as earthquake energy from motion along one of many ancient, deeply buried faults.”

“Such reactivations are common and not typically large enough in Michigan to create damage, though they are often felt,” he said.

Yihe Huang is a U-M geophysicist in the Department of Earth and Environmental Sciences who recently established a network of seismometers around western Lake Erie to study earthquakes there. The project is called LEEP for Lake Erie Earthquake exPeriment, and it currently includes eight seismometers around the western corner of the lake.

“Unfortunately, our seismometers may not have recorded this particular earthquake, as we stopped doing service on them since the pandemic started,” she said.

“We’ll need to investigate whether this earthquake is related to the 2018 Detroit earthquake,” she said. That magnitude-3.6 earthquake rattled Southeast Michigan and parts of Ontario.

But it is unlikely that Friday night’s Monroe-area earthquake was related to last year’s magnitude-4.0 earthquake just off the Lake Erie shoreline of northeastern Ohio, because the two quakes were too far apart, Huang said.

“This evening’s earthquake is rare for Michigan, for sure, but not likely a damaging event,” Niemi said. “It isn’t large enough for the USGS to predict damage or loss estimates.”

“In the United States, earthquakes are infrequent east of the Rocky Mountains, although large earthquakes do occasionally occur,” he said. “In the north-central U.S., including Michigan, these earthquakes are likely due to the long-term adjustment of Earth’s crust to the removal of the Laurentide ice sheet, a continental glacier that covered Michigan 12,000 year ago and that formed the Great Lakes. Earthquakes resulting from this process are unlikely to be large, and their frequency is unpredictable.”