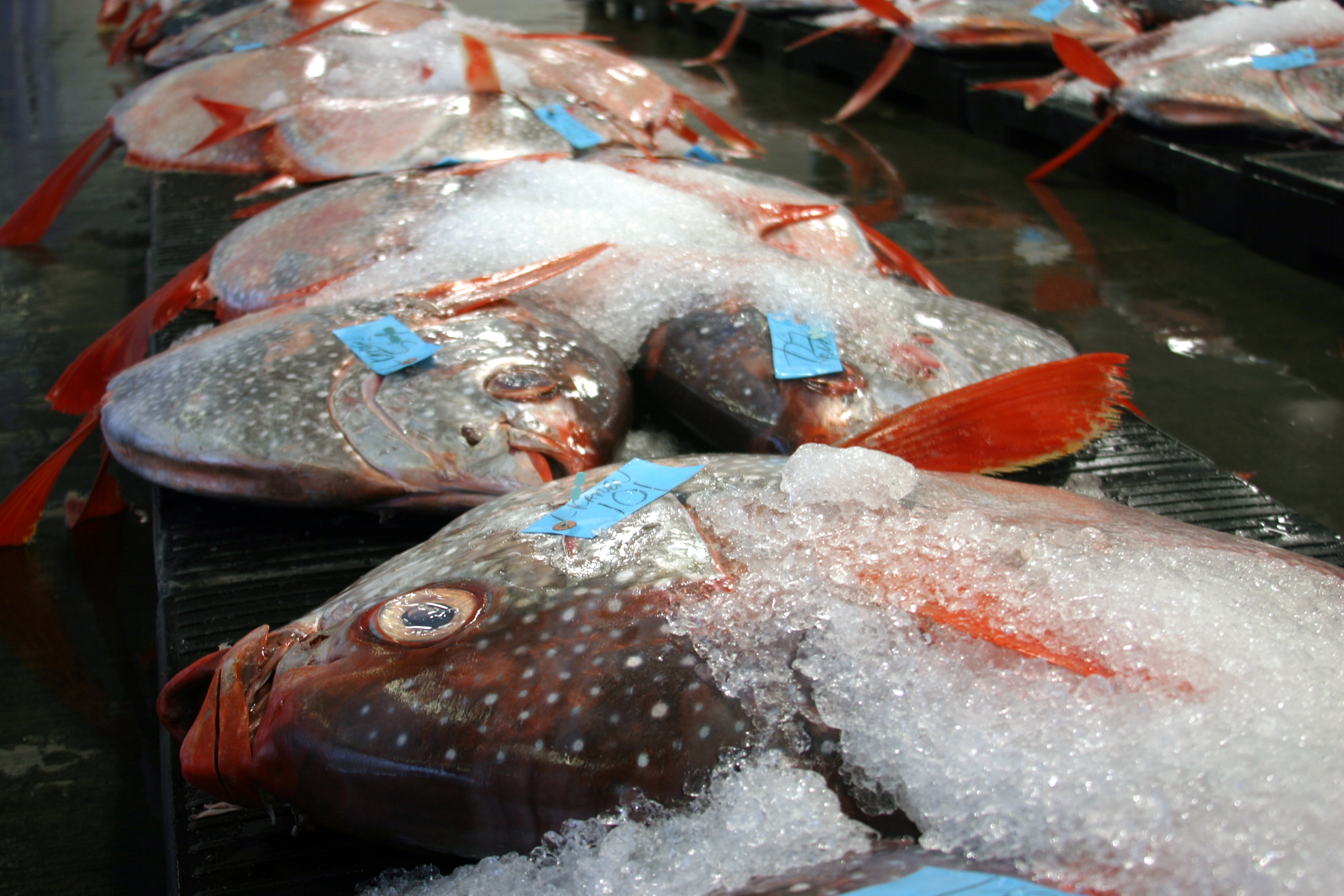 Opah, also called moonfish, at a fish auction in Hawaii. Opah were one of nine fish species analyzed in a new study that looked at how mercury gets into open-ocean fish and why the levels vary with depth. Image credit: C. Anela ChoyANN ARBOR—University of Michigan researchers and their University of Hawaii colleagues say they’ve solved the longstanding mystery of how mercury gets into open-ocean fish, and their findings suggest that levels of the toxin in Pacific Ocean fish will likely rise in coming decades.

Using isotopic measurement techniques developed at U-M, the researchers determined that up to 80 percent of the toxic form of mercury, called methylmercury, found in the tissues of deep-feeding North Pacific Ocean fish is produced deep in the ocean, most likely by bacteria clinging to sinking bits of organic matter.

The study also confirmed that the mercury found in Pacific fish near Hawaii likely traveled through the air for thousands of miles before being deposited on the ocean surface in rainfall, said U-M environmental scientist Joel Blum. The North Pacific fisheries are downwind from rapidly industrializing nations such as China and India that are increasingly reliant on coal-burning power plants, a major source of mercury pollution.

“This study reinforces the links between mercury emitted from Asian countries and the fish that we catch off Hawaii and consume in this country,” said Blum, the lead author of a paper published online publication Aug. 25 in Nature Geoscience.

“The implications are that if we’re going to effectively reduce the mercury concentrations in open-ocean fish, we’re going to have to reduce global emissions of mercury, including emissions from places like China and India,” Blum said. “Cleaning up our own shorelines is not going to be enough. This is a global atmospheric problem.”

The main pathway for human exposure to methylmercury is the consumption of large predatory marine fish such as swordfish and tuna. Effects of methylmercury on humans can include damage to the central nervous system, the heart and the immune system. The developing brains of fetuses and young children are especially vulnerable.

In December 2011, the Environmental Protection Agency released new standards sharply limiting future emissions of mercury and other toxic pollutants from coal- and oil-burning power plants in the United States. Earlier this year, the United Nations Environment Programme negotiated the Minamata Convention on Mercury, an international treaty aimed at curbing future mercury emissions; it is still unclear what level of mercury-emission reductions will result.

It has been known for some time that large predatory marine fish contain high levels of methylmercury in part because they eat lots of smaller, mercury-containing fish. The toxin builds up in the tissues of the top-of-the-food-chain predators through a process called bioaccumulation.

In 2009, researchers at the University of Hawaii determined that the depth at which a species of fish feeds is nearly as important as its position in the food chain in determining how much methylmercury it contains. 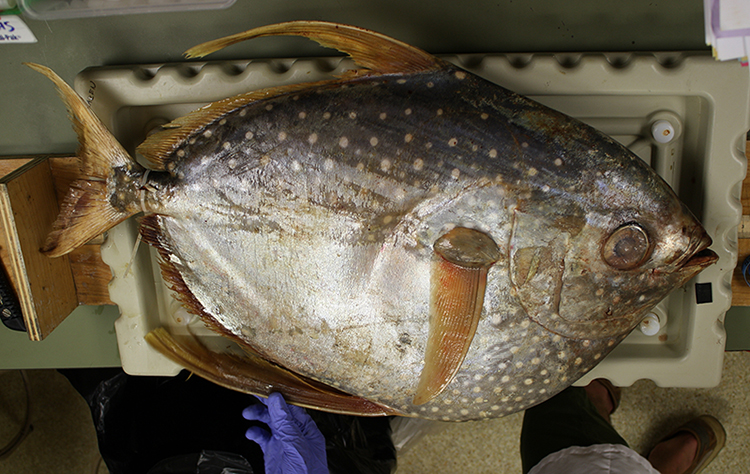 An opah, also called a moonfish. Opah first became popular as a sushi and sashimi in the late 1980s and early 1990s and are especially popular in Hawaii. Image credit: C. Anela Choy“We found that predatory fish that feed at deeper depths in the open ocean, like opah and swordfish, have higher mercury concentrations than those that feed in waters near the surface, like mahi-mahi and yellowfin tuna,” said Brian Popp, a professor of geology and geophysics at the University of Hawaii at Manoa and co-author of both the 2009 paper and the new Nature Geoscience paper. “We knew this was true, but we didn’t know why.”

That observation was difficult to explain because researchers had presumed that if methylmercury production occurs in the open ocean, it most likely takes place in the biologically active surface layer, carried out by microbes that convert inorganic mercury into the toxic organic form through a process called methylation.

But in the latest study, the Michigan and Hawaii researchers showed that perhaps as much as 80 percent of the methylmercury found at depth in the central North Pacific is produced below what is known as the surface mixed layer, a region extending down to about 165 feet. They found that methylation continues down to a depth of about 2,000 feet, most likely the work of oxygen-shunning bacteria attached to sinking particles of dead plant and animal matter containing inorganic mercury.

That finding is important in part because scientists expect mercury levels at intermediate depths (660 to 3,300 feet) in the North Pacific to rise in coming decades; one estimate calls for a doubling by mid-century. At the same time, oxygen-depleted regions called oxygen minimum zones, which typically occur at depths greater than 1,300 feet, are expanding in oceans worldwide, and human-caused climate change is expected to accelerate that process.

The work by Blum and his colleagues suggests that if these two trends unfold as expected, conditions will favor increased production of methylmercury by microbes known as anaerobic bacteria, which will increase the threat to the North Pacific fisheries, the world’s most important source of seafood.

“The implication is that predictions for increased mercury in deeper water will result in higher levels in fish,” said Blum, a professor in the Department of Earth and Environmental Sciences. 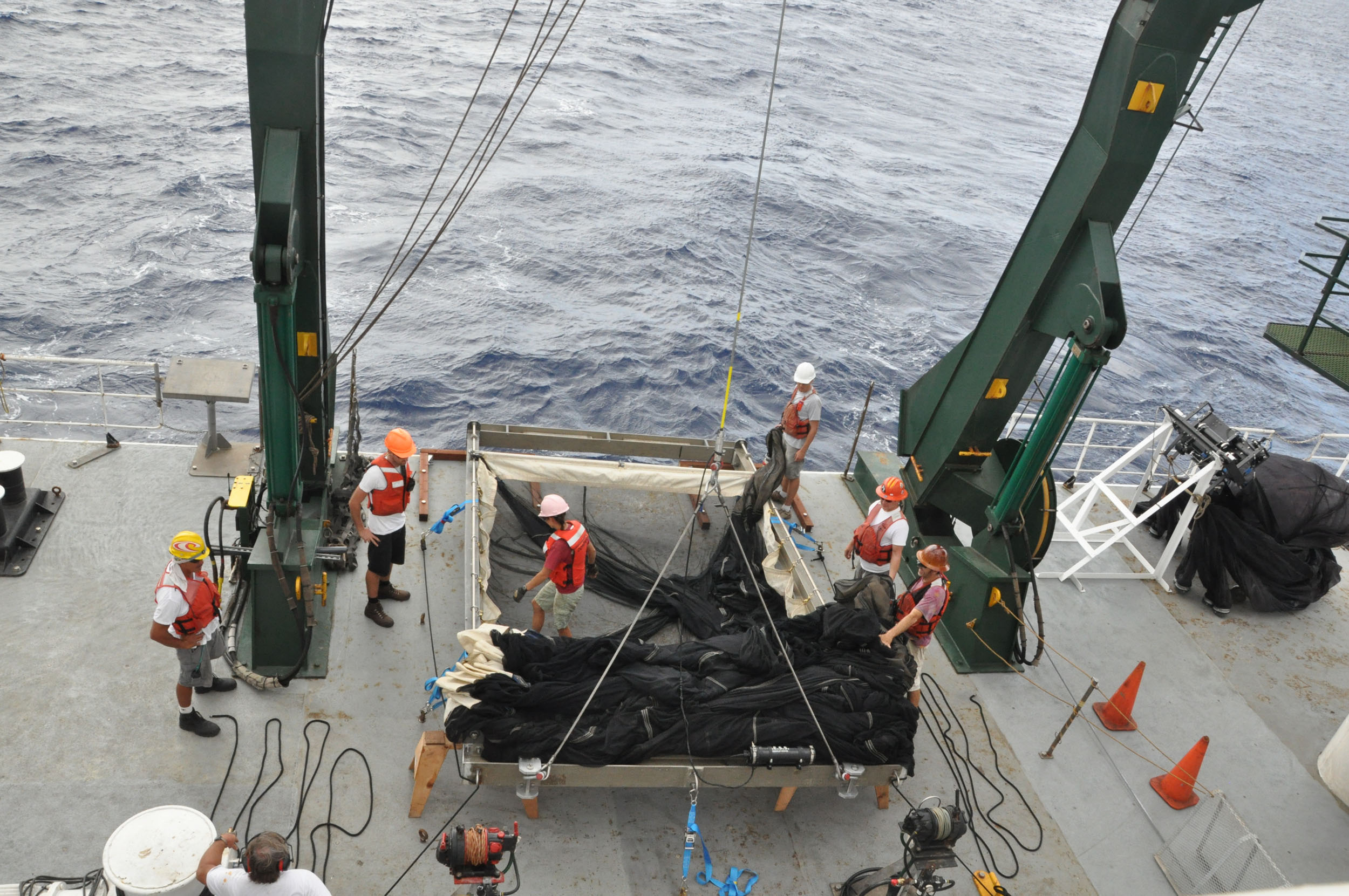 Blum led the effort to very precisely measure the ratios of the stable isotopes of mercury, relying on techniques his lab has developed to take advantage of a natural phenomenon called isotopic fractionation. Popp led the Hawaii group that sampled fish at various depths, measured the total amount of mercury in their muscle tissues, and determined their position in the marine food web.

Together, the researchers showed how and where methylation occurs in the open ocean and explained the previously observed increases in the mercury concentration of predatory fish with depth. They found that while methylation occurs in well-lit near-surface waters, sunlight destroys up to 80 percent of the methylmercury formed there, through a process called photochemical degradation.

“The crystal-clear waters surrounding Hawaii and the unique information that we had about the depths at which our local fish feed allowed us to clearly identify both the photochemical degradation of methylmercury at surface levels and the microbial production of methylmercury from inorganic mercury in deeper waters,” said Popp, a University of Michigan graduate.

In addition, the isotopic composition of the mercury found in the fish tissues was “a nearly perfect match” with the chemical signature of mercury in the atmosphere known to travel long distances, far from pollution sources such as coal-burning power plants, Blum said. 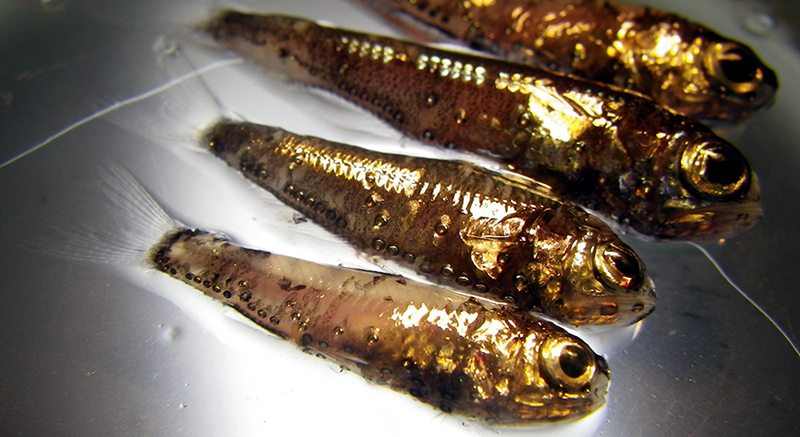 Lantern fish are small, deep-dwelling fish named for the fact that they glow through a process called bioluminescence. Lantern fish were one of nine fish species analyzed in a new study of mercury levels in open-ocean fish. Image credit: C. Anela ChoyThat finding confirms an idea that was long-suspected but previously unsupported by hard evidence: “These results strongly support the hypothesis that long-range transport of mercury deposited to the ocean surface is ultimately what’s ending up in these fish,” Blum said.

In addition to Blum and Popp, authors of the Nature Geoscience paper are Jeffrey C. Drazen and C. Anela Choy of the University of Hawaii and Marcus W. Johnson of the U-M Department of Earth and Environmental Sciences.