Michigan’s sugar maples will struggle in a warmer, drier future despite help from nitrogen pollution 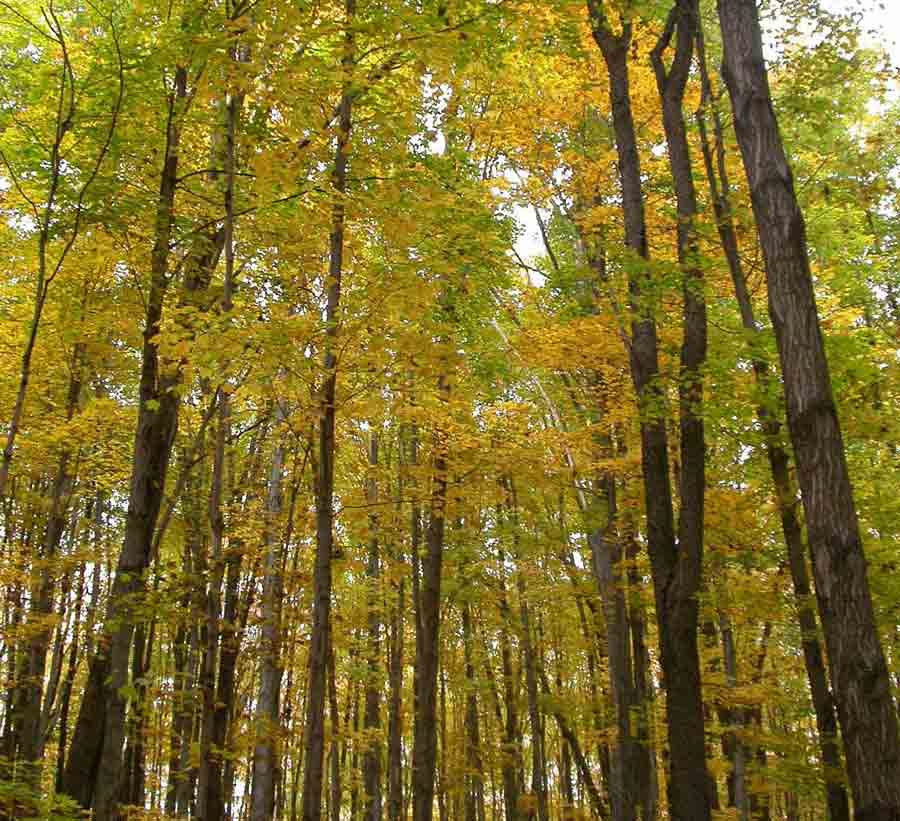 Fall foliage in a Michigan northern hardwood forest. This site is located in Wexford County, Michigan, and was part of a U-M-led study examining how nitrogen deposition and a changing climate affect the growth of sugar maples. Photo by Rima Upchurch.

ANN ARBOR—Though Michigan’s sugar maples benefit from the growth-promoting effects of nitrogen compounds in the environment, those gains will not fully offset the added stresses of growing under a drier climate in the future, according to a new University of Michigan-led study.

Sugar maples, known for their fiery fall foliage and as the main source of maple syrup, are a dominant tree species in the northern hardwood forests of eastern North America. They are found mainly in moist, well-drained soils and are drought-sensitive. 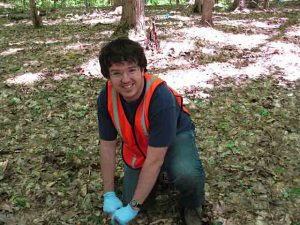 Former University of Michigan postdoctoral research fellow Zac Freedman collects a soil sample at a study site in Oceana County, Michigan. This location is one of four Michigan study sites used in a U-M-led study examining how nitrogen deposition and a changing climate affect the growth of sugar maples. Photo by Rima Upchurch.

Some climate forecasts for the Upper Great Lakes region in the coming decades call for warmer temperatures and an increased likelihood of summer drought, conditions that could prove stressful for sugar maples and other trees.

But as the climate continues to change, forests worldwide are also being exposed to rising levels of growth-boosting nitrogen compounds generated by motor vehicles, power plants, factories, agriculture and other human sources. This human-derived nitrogen is considered a pollutant but also has a fertilizing effect on trees, promoting growth.

Climate scientists and forest ecologists have long wondered whether the fertilizing effects of human-derived nitrogen would be enough to offset added stresses produced by a warmer, drier climate. It’s a difficult question to answer, and previous studies produced contradictory results.

The new U-M-led study, based on 20 years of data from four forest sites in both Michigan peninsulas, concludes that nitrogen deposition from human activities “will not fully compensate for the negative effects of growing under the drier forecasted climates.”

In the coming decades, Michiganders should expect decreased growth of sugar maples across the state, according to the study, which is scheduled for online publication in the journal Ecology on Jan. 17. And if the most extreme climate predictions for the region prove true, sugar maples will eventually—over a period of centuries—disappear from the state’s Lower Peninsula altogether.

“Under extreme climate scenarios, the increase in nitrogen won’t be able to compensate for decreased growth of sugar maples due to lack of water,” said Ibáñez, an associate professor at the School for Environment and Sustainability and in the Department of Ecology and Evolutionary Biology.

Understanding how various tree species will respond to warmer and drier conditions is essential for producing accurate forecasts of future forest growth. And that’s important to know because the world’s forests remove about one-quarter of the heat-trapping carbon dioxide emitted into the atmosphere annually through the burning of fossil fuels.

If forest growth slows in response to climate stresses, then those trees will remove less carbon dioxide, which will exacerbate the warming problem. And northern forests around the world are especially important carbon “sinks,” removing huge amounts from the air and storing it in tree wood and forest soils. 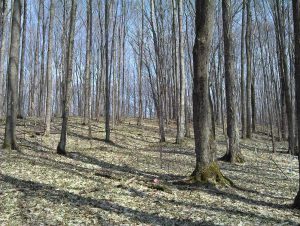 A typical northern hardwood forest in Michigan, dominated by sugar maples and also including red oak, white ash and yellow birch. This forest is located in Wexford County, Michigan, and was part of a U-M-led study examining how nitrogen deposition and a changing climate affect the growth of sugar maples. Photo by Rima Upchurch.

“The majority of carbon stored on land is in forests,” said U-M forest ecologist and study co-author Donald Zak, a professor at the School for Environment and Sustainability and in the Department of Ecology and Evolutionary Biology. “And how forests grow in the future will influence the amount of human-derived carbon dioxide that remains in the atmosphere. That, in turn, will have a feedback effect on global temperatures.

“That’s why these questions about forest growth are so important. And the only way to get some of the answers is through the type of long-term ecological research used in this study.”

To assess the combined impact of human-derived nitrogen deposition and climate change on tree growth, Ibáñez, Zak and their colleagues used data from a federally funded nitrogen-deposition study at four Michigan hardwood-forest study sites, including one at the U-M Biological Station near Pellston, Mich.

The four sites are separated by 300 miles and span the north-to-south distribution of northern hardwood forests, from the west-central Lower Peninsula to the northwestern Upper Peninsula. The Michigan Gradient Study was established in 1987 to examine the effects of climate and atmospheric deposition on forest growth and ecosystem processes in the Great Lakes region. Zak is one of the project’s principal investigators.

Since 1994, project researchers have been adding solid sodium nitrate, a nitrogen compound used in fertilizers, to the soils at some of the Michigan Gradient Study plots to simulate levels of nitrogen deposition expected by the end of this century. Much of the nitrogen emitted into the atmosphere by humans later falls back to Earth in rain, snow and dust.

For the study reported in Ecology, the researchers analyzed the combined effects of nitrogen deposition, summer temperature and soil moisture on the growth of sugar maples. They used records from 1,016 trees collected over the period 1994-2013.

The vast scope of the Michigan Gradient Study, its unusual experimental design, and new statistical tools enabled the researchers to separate the effects of human-derived nitrogen on tree growth from those associated with temperature and water limitation—something previous studies could not do, Zak said.

The results show that, in all cases, added nitrogen boosted measured tree growth, an effect that was accentuated as temperatures increased and soil moisture decreased. In addition, the researchers simulated future growth rates for each tree under two climate scenarios previously developed for the Upper Great Lakes region. 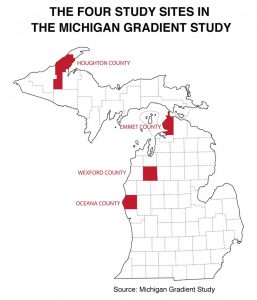 Scenario One envisions moderate changes by 2100: a temperature rise of 1.3 degrees Fahrenheit and a 14 percent increase in summer precipitation. This scenario assumes that global carbon dioxide emissions eventually reverse course and start to decline.

Scenario Two assumes that current carbon dioxide emission levels continue into the future, resulting in more extreme climatic changes in the region: a temperature rise of about 10 degrees Fahrenheit and a 40 percent decrease in summer precipitation by 2100.

The computer simulations showed that sugar maple growth would be slightly harmed under Scenario One, especially at the warmer southern sites. Results for Scenario Two showed a large and consistently significant decrease in growth for sugar maples at all four sites and for all plots—those treated with the nitrogen fertilizer as well as untreated plots. Threefold decreases in growth rates are possible under Scenario Two conditions.

Under Scenario Two, sugar maples would eventually disappear from Michigan’s Lower Peninsula, though the changes would likely occur over several centuries, Ibáñez said. If that happens, the sugar maple and beech-dominated northern hardwood forest might be replaced by oak-hickory forest, which is better adapted to droughty conditions but which doesn’t remove as much carbon from the atmosphere.

“Carbon sequestration is a huge service provided to us by forests and is very important for any kind of climate regulation into the future,” Ibáñez said. “If droughty conditions reduce the productivity of Michigan forests in the future, their ability to sequester carbon will suffer as well.”

In addition to Ibáñez and Zak, the authors of the Ecology paper are Andrew Burton of Michigan Technological University and Kurt Pregitzer of the University of Idaho. The research was supported by grants from the National Science Foundation’s Long Term Research in Environmental Biology program and from the Department of Energy.