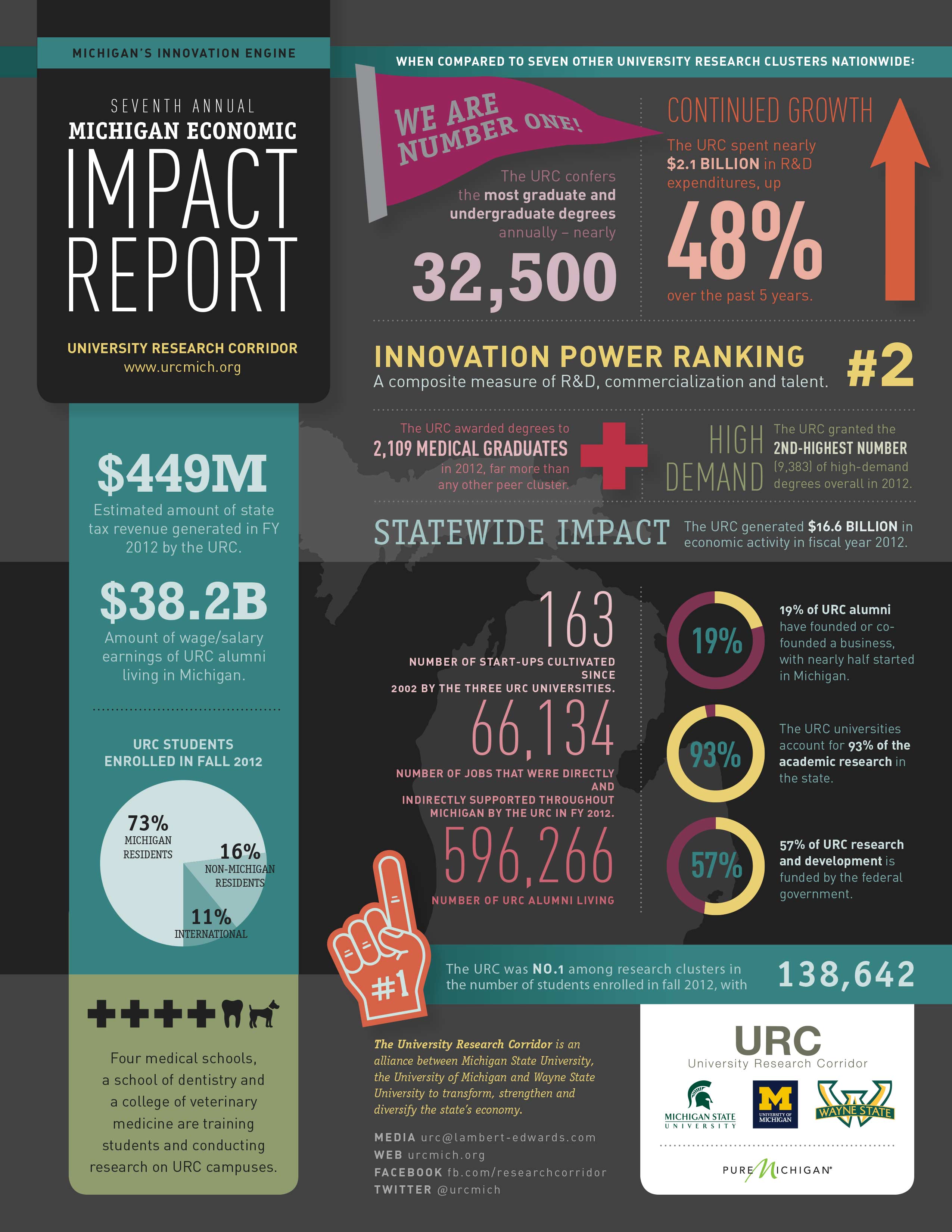 The report, prepared by East Lansing, Mich.-based Anderson Economic Group (AEG), showed that the URC universities conferred 32,483 graduate and undergraduate degrees in 2012, more than any of the university innovation clusters the URC has benchmarked itself against since 2007. The URC also granted the highest number of medical degrees and second-highest number of high-demand degrees overall, saw its research and development spending rise to nearly $2.1 billion and continued to commercialize its research through patents and start-up companies.

“From Day One, Michigan’s URC wanted to measure itself against the very best and this report helps us do just that,” said URC executive director Jeff Mason. “While the URC does well in many categories when comparing itself to other university innovation clusters, the Innovation Power Ranking gives an even better look at how competitive the three URC universities are.”

“The URC is contributing to Michigan’s economy through tax revenues, job creation and producing the graduates and research that can fill the needs of Michigan businesses,” said University of Michigan President Mary Sue Coleman. “We take our responsibility to make Michigan a better and stronger state extremely seriously.”

The URC was responsible in 2012 for more than 66,000 direct and indirect jobs statewide, with the impact being felt in regions ranging from the Upper Peninsula to Michigan’s southern border with Indiana and Ohio. Michigan State University President Lou Anna K. Simon said the universities are working hard to assist in accelerating Michigan’s economic growth.

“We continue to find more ways that we can commercialize the work being done on our campuses, either through patents or by creating new start-up companies,” she said. “We’re also giving our faculty, students and alumni a growing array of tools to become entrepreneurs.”

Since 2002, the three URC universities have cultivated 163 start-up companies, including 71 launched in the past five years. Among URC alumni, a 2013 survey indicated that they had started or acquired businesses at double the national average rate among college graduates since 1996 and were 1.5 times as successful as the average U.S. business owner at keeping those start-ups and acquisitions alive in the previous five years.

“The three URC universities constantly are striving for excellence in their joint goals of educating students, attracting talented workers to Michigan, supporting innovation and encouraging the transfer of technology to the private sector,” said Wayne State University President M. Roy Wilson. “Those efforts are making a difference in Michigan and especially in Detroit, where the URC universities are deeply involved in assisting the city’s resurgence.”

For the past seven years, the URC has commissioned Anderson Economic Group to provide an annual report that calculates the economic impact of the URC’s activities on Michigan’s economy and compares its performance to peer university innovation clusters nationwide. The report matches up Michigan’s URC against clusters in Northern California, Southern California, Illinois, Massachusetts, North Carolina, Pennsylvania and Texas.

“The new Innovation Power Ranking developed by AEG gives an even clearer picture of the URC’s success in areas that help boost Michigan’s economy, from innovative research that gives Michigan businesses an edge to helping students gain the skills they need to compete in high-demand fields,” said Patrick Anderson, principal and CEO of AEG, an economic and research consulting firm. “In looking at other university innovation clusters nationwide, AEG finds that Michigan’s URC is in a strong position on many measures.”

In creating the Innovation Power Ranking, AEG weighted talent and research at 40 percent each and technology transfer and commercialization at 20 percent, reflecting how large research universities typically allocate efforts. The URC was No. 1 in talent, fourth in R&D spending and seventh in commercialization among its peers.

The report also includes a breakdown of the URC’s economic impact in 10 regions statewide, including the effect of the additional money URC alumni living in Michigan earn because of their university degrees and the spending of students attending one of the three URC universities. Nearly a quarter of all higher education students in Michigan last year attended one of the three URC universities, which accounted for 93 percent of academic research in the state.