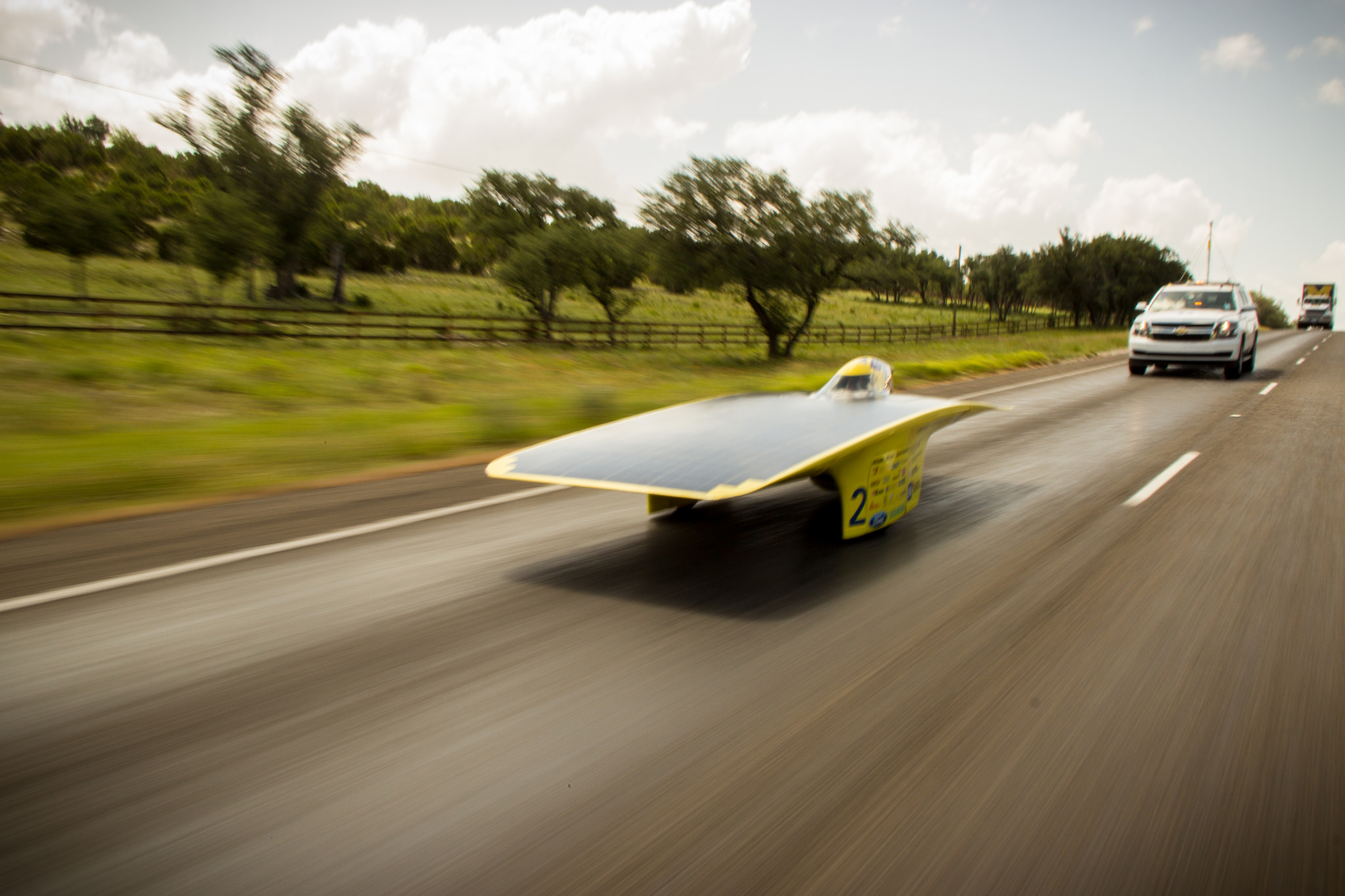 University of Michigan’s 2014 solar car, Quantum. Image credit: Darren ChengANN ARBOR—After a series of setbacks including a motor problem that sidelined their vehicle in the first 10 minutes of an eight-day race, the University of Michigan’s national champion Solar Car Team has won the American Solar Challenge, according to this afternoon’s unofficial results.

The team crossed the finish line in Minneapolis at 1:50 p.m. ET today, earning its fifth consecutive first place in the 1,700-mile contest. The race, which happens every other year on a different course, began in Austin, Texas, on July 20. Michigan raced against 22 other teams of college students that had built their own solar-powered electric vehicles.

In qualifying rounds, Michigan had clinched the first starting position. But soon after the students hit the road, driver Jake Fratzke knew something was wrong. The car wouldn’t accelerate. He radioed back to his caravan.

“I said, ‘Hey, guys, the motor’s cutting out. I’m not able to get up this hill,'” said Fratzke, a junior in mechanical engineering. “It was scary. It was out of nowhere. It wasn’t like the car had been acting up.”

The speed limit was slow and traffic was heavy, but team members were able to push him to the top of the hill. They all hoped momentum on the way down would bring a miracle. When it didn’t, they pulled over.

One engineer thought the motor was the problem. Another thought it was the motor controller, which would have demanded a more time-consuming fix. Crew chief Ian Larson, a senior in computer engineering, took a gamble and ordered a motor swap.

But the team as a whole was at a standstill. Five of their competitors passed them by.

“It definitely was demoralizing,” Larson said. “It was right after the start and we were already on the side of the road, and there were race officials all around so that added another level of stress. And you know that every minute is lost.”

The stop only set them back 20 or 30 minutes. Then, under sunny skies, team strategists decided to push the car to the speed limit rather than hold back to conserve energy. By the end of the day, U-M was back in the lead.

“We pulled together,” Fratzke said. “To see that happen was awesome.”

Breaking from its traditional approach, the team ran an older vehicle named Quantum—a lightweight three-wheeler that took third in the World Solar Challenge in Australia in 2011 and first in the American race in 2012. Typically, the students enter the car they most recently built for Australia. But the last Australian race required four wheels, which is a slower configuration than three.

Quantum is a solid car, but none of the students on the current team were involved in building it. So they didn’t know it as intimately as most teams know the car they’re racing. Beyond that, due to turnover and graduation, none of these students had ever raced before.

Through the summer, as the students readied for the American challenge, their lack of experience showed. They had to cut their first attempt at a practice race short when drivers had trouble controlling Quantum in the rain. Then just weeks before the race was to start, they hit a giant pothole and lost a suspension mount.

But with help from a former crew chief and Roush Performance, an automotive engineering company that has long been a sponsor, they got the car fixed.

“This isn’t just a win,” said Pavan Naik, project manager and junior industrial and operations engineer. “It’s a win after one failure after another. We’ve learned so much from that—how to work as a team and how to help each other out. I’m excited for the next World Solar Challenge.”

So is Allison Hogikyan, an atmospheric, oceanic and space sciences student who leads the team’s meteorology division.

“For a young team to come together and learn how this car works is a pretty incredible feat,” she said.

While nearly 20 students were on the American Solar Challenge race crew, the team is made up of more than 100 students from across campus. Major sponsors include Ford, General Motors, IMRA, Michigan Engineering, NYK, Qatar Airways and Siemens PLM Software.