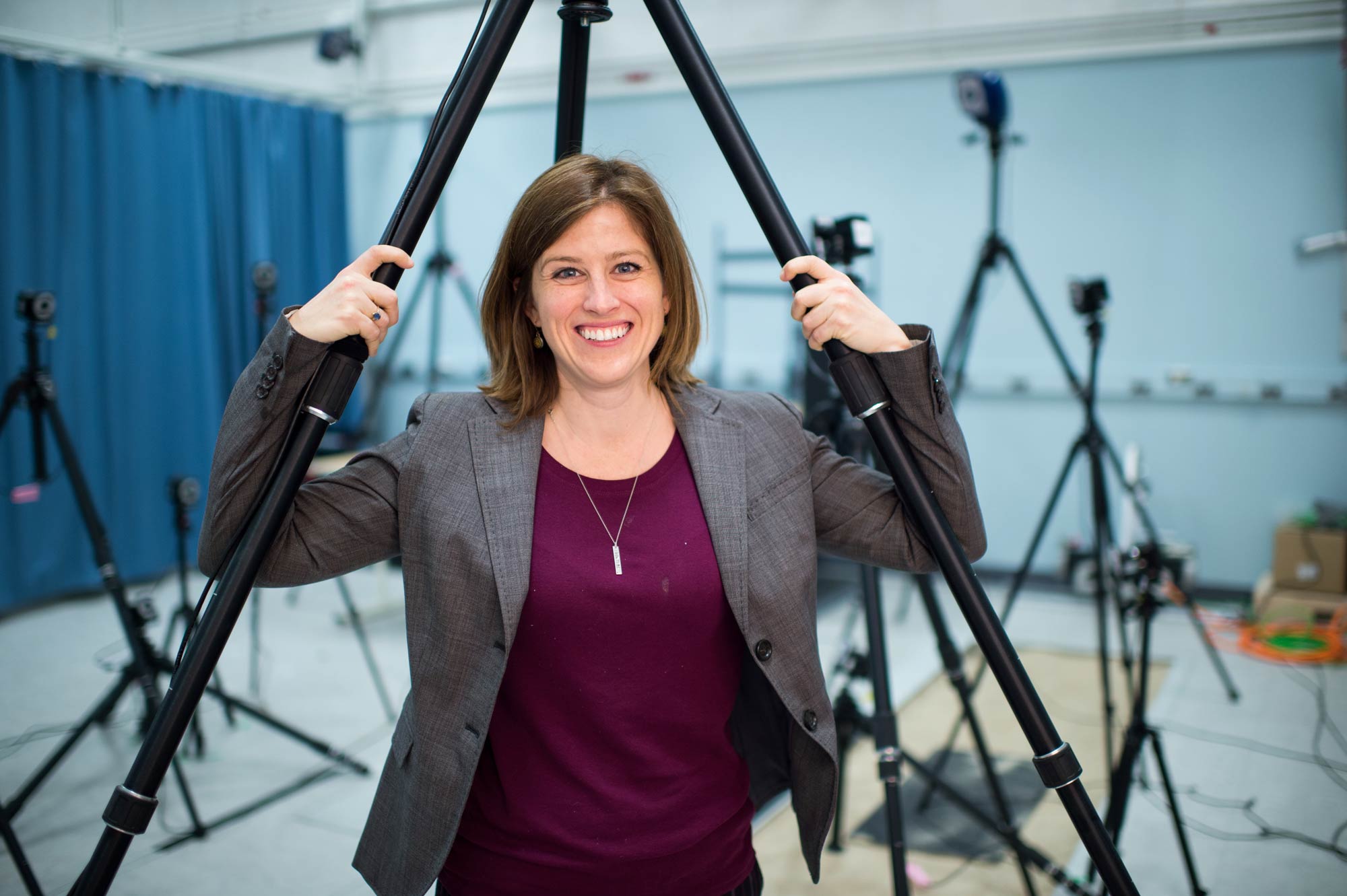 Gates’ lab belongs to the U-M Rehabilitation Robotics Group. The theme of the many research projects conducted in the lab is pretty simple: Help upper- and lower-limb amputees get around in the world more easily.

One of the lab’s main lines of research involves a motor-driven lower limb prosthesis called BiOM, something that would have been considered science fiction a decade ago.

“This is a unique device with a ton of potential,” says Gates, assistant professor of movement science at U-M’s School of Kinesiology. “We’re trying to determine who can benefit the most from this, and how we can help prostheses users maximize their performance benefits.”

The Department of Defense is interested in the issue and is helping fund the research. There were more than 1,700 service-related amputations in Iraqi Freedom, Operation New Dawn and Operation Enduring Freedom, and most were young adults. Overall, an estimated 1.6 million people in the United States live with limb loss.

Gates’ lab looks like something from the pages of Ray Bradbury. A 20-camera motion capture system fills the back of the room, with tripods of different heights pointing toward the center of the space at various mock scenarios. Here, Gates, her research assistants and students record subjects performing specific motor tasks to glean various pieces of information from the limb movements. 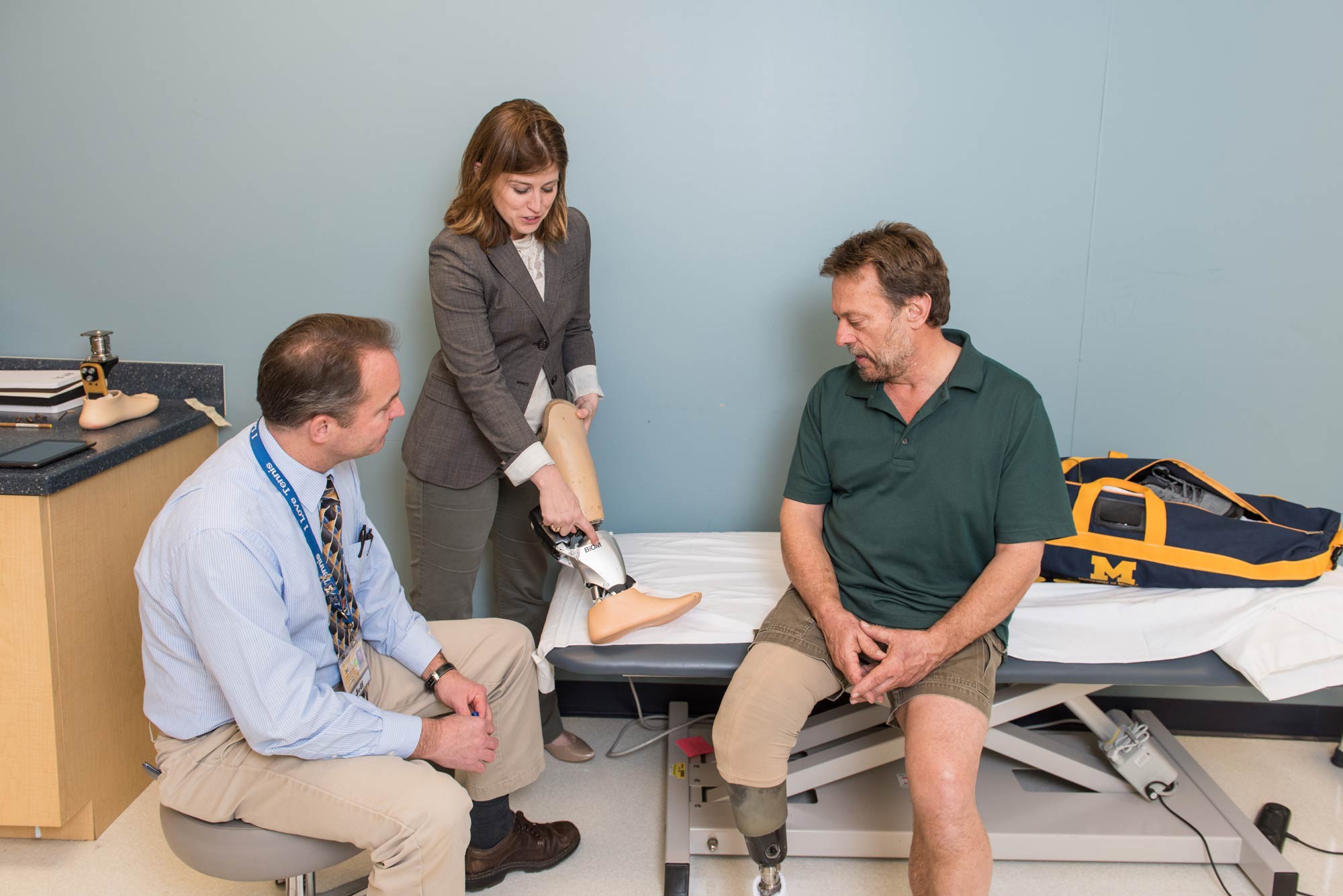 Jeffrey Wensman and Deanna Gates, assistant professor, Director of the Rehabilitation Biomechanics Laboratory at the University of Michigan help fit Roger Schulte (right) with a prosthesis. Image credit: Scott C. Soderberg, Michigan PhotographyGates, who also has an appointment in biomedical engineering, says that one of the theories behind the motor-driven BiOM device is that the extra power will lower the user’s energy expenditure closer to that of a non-amputee. One of the drawbacks of traditional prosthetics is that they require 10-to-30 percent more energy to use. Consequently, many amputees don’t get enough physical activity.

To that end, one of the lab’s studies compares physical activity and muscle fatigue of patients outfitted with GPS and activity trackers using their own prosthetics, versus the powered BiOM. Researchers want to see if activity increases and muscle fatigue decreases. The hope is that with the right amount of power, walking with the BiOM will be more efficient.

A similar study in collaboration with mechanical engineering examines whether patients benefit from additional power in their prosthetic, and how much is optimal.

“More is not always better,” Gates says. “In some cases, a little power was worse than nothing.”

However, researchers believe that finding just the right amount could vastly improve the user’s experience.

Another project looks at whether patients benefit immediately after clinicians fit their BiOM prosthesis. While still too early to say for certain, preliminary work shows that amputees may need training to to help them take full advantage of the device features. 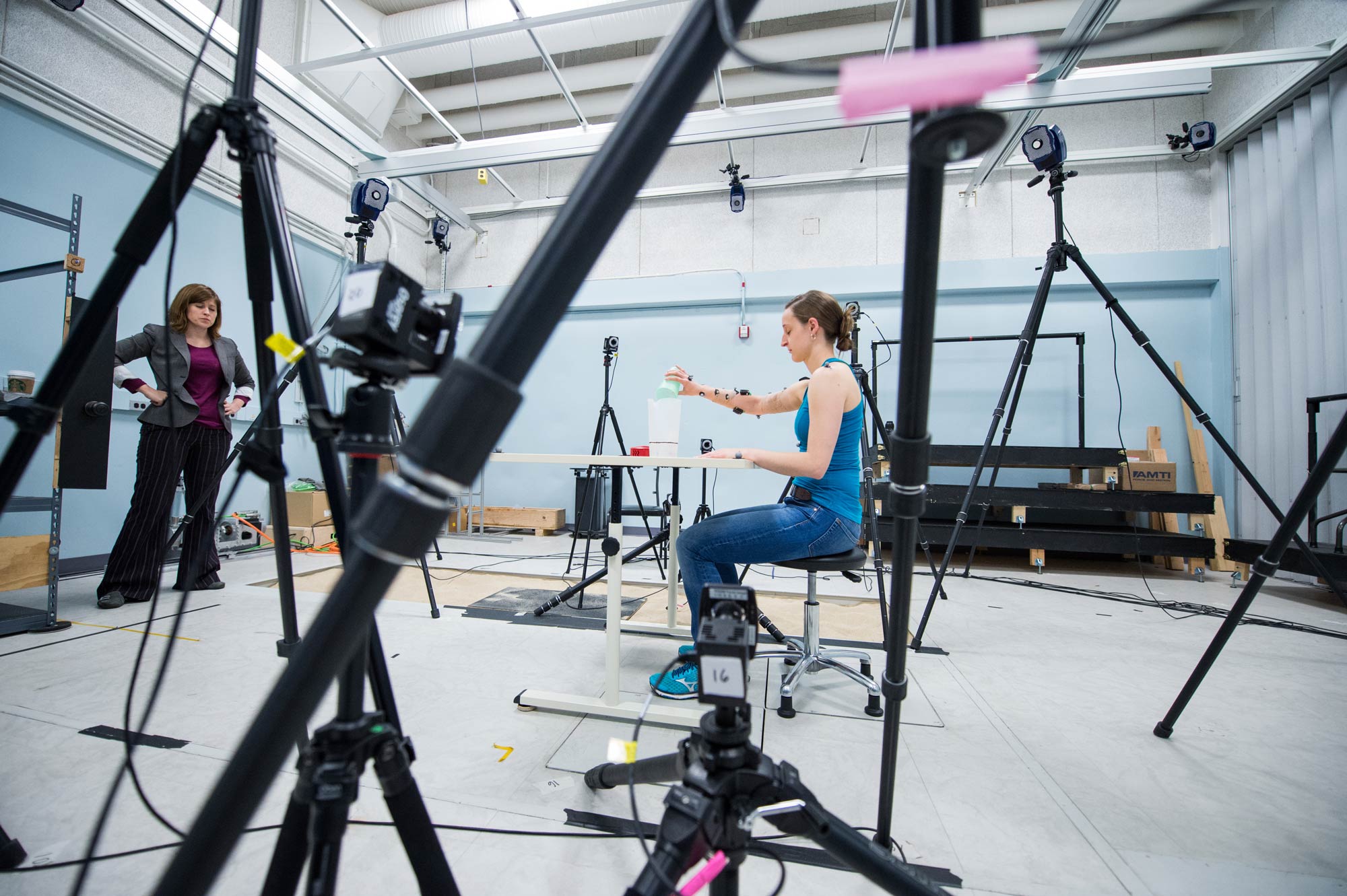 Deanna Gates, director of the Rehabilitation Biomechanics Laboratory at the University of Michigan observes as participant Kali Almdale pours a glass of water. They’re recording Almdale’s wrist movements using sensors. Image credit: Austin Thomason, Michigan PhotographyThe lab is also working on studies involving upper limbs, Gates says. One project led by engineers and surgeons from biomedical engineering and plastic surgery takes existing nerves formerly connected to muscles in the amputated limb and wraps a tiny piece of another muscle, akin to a ‘muscle burrito,’ around the end of the nerve. The nerve then grows into the muscle, and electrical signals from those little muscles are used to control a more dexterous prosthesis.

Other projects look at which features are most important to upper limb prosthetic users and whether they’re willing to have surgery to get these features, and quantify how people use different types of prosthetics.

“It is a great time for prosthetics research. There’s a lot of current research on new ways to control prostheses using signals from the body, such as the brain, nerves or muscles,” Gates says. “These can give users more direct control of their devices and allow for more different types of motion.”

Improvements in technology are being made to increase battery life, make batteries smaller and to construct comfortable, easy-to-wear devices that are connected to the body.

“The good news is that these techniques are probably only a few years away from being implemented outside of the research lab,” Gates says.