Nano-shells deliver molecules that tell bone to repair itself 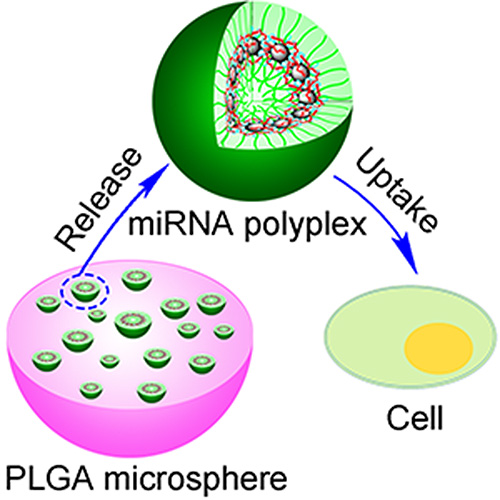 Using the polymer sphere to introduce the microRNA molecule into cells elevates the job of existing cells to that of injury repair by instructing the cells’ healing and bone-building mechanisms to switch on, said Peter Ma, professor of dentistry and lead researcher on the project.

It’s similar to a new supervisor ordering an office cleaning crew to start constructing an addition to the building, he said.

Using existing cells to repair wounds reduces the need to introduce foreign
cells—a very difficult therapy because cells have their own personalities, which can result in the host rejecting the foreign cells, or tumors. The microRNA is time-released, which allows for therapy that lasts for up to a month or longer, said Ma, who also has appointments in the College of Engineering.

The findings are scheduled for publication in the Jan. 14 issue of Nature Communications. The technology can help grow bone in people with conditions like oral implants, those undergoing bone surgery or joint repair, or people with tooth decay.

“The new technology we have been working on opens doors for new therapies using DNA and RNA in regenerative medicine and boosts the possibility of dealing with other challenging human diseases,” Ma said.

It’s typically very difficult for microRNA to breach the fortress of the cell wall, Ma said. The polymer sphere developed by Ma’s lab easily enters the cell and delivers the microRNA.

Bone repair is especially challenging in patients with healing problems, but Ma’s lab was able to heal bone wounds in osteoporotic mice, he said. Millions of patients worldwide suffer from bone loss and associated functional problems, but growing and regenerating high-quality bone for specific applications is still very difficult with current technology.

The next step is to study the technology in large animals and evaluate it for use in humans.